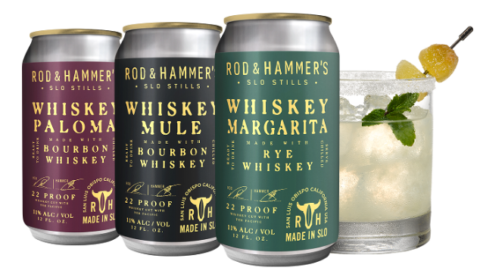 Rod & Hammer’s SLO Stills’ canned whiskey cocktails (11% ABV; 22 proof; MSRP $17.99/12oz four-pack) are full-strength and ready to drink straight out of the can – no mixing necessary. Simply serve chilled or pour over ice, making for a convenient cocktail for outdoor or indoor activities. Made with all-natural ingredients and Rod & Hammer’s SLO Stills whiskey that’s Cut With The Pacific™ using purified ocean water, these unique variations on traditional cocktails are true, bold and authentic. Flavors include a Whiskey Margarita, Whiskey Mule, and a Whiskey Paloma.

The new cocktails are handcrafted and canned at Rod & Hammer’s SLO Stills’ distillery in San Luis Obispo, founded when Rodney “Rod” Cegelski, a California surfer, met Hamish “Hammer” Marshall, an Aussie jackaroo, and a friendship emerged over a shared appreciation of quality spirits and the Central Coast. The distillery was natural offshoot for Marshall, a beer-loving Aussie who purchased the long-standing California brewery SLO Brew in 2010 and has been pushing it to new heights ever since.

“We wanted to give classic cocktails a bit of a whiskey twist,” says co-founder Rodney Cegelski. “Their full strength and handcrafted with our whiskey for a proper cocktail on the go.”

Since earning 93 points from Wine Enthusiast for its flagship Distiller’s Reserve Rye Whiskey, one of the select few California spirits recognized by Wine Enthusiast in its “Top 100 Spirits of 2020,” Rod & Hammer’s SLO Stills has been showing the world how California does whiskey. With its new line of canned cocktails, it joins the fast-growing RTD segment with three exceptional interpretations of classic cocktails.

Be the first to try the canned cocktailsat the official launch Dec. 3 at WhiskeyFest San Francisco at the Marriott Marquis, and keep an eye out for 4PK 12poz cans hitting retailers across California just in time to ring in the new year.

Whiskey Mule is made with SLO Stills Bourbon Whiskey blended with lime juice and ginger for a twist on the traditional moscow mule that showcases the bold flavor bourbon.  ($17.99/4PK 12oz Cans)

Crafted by California surfer Rodney “Rod” Cegelski, and Aussie jackaroo Hamish “Hammer” Marshall, SLO Stills was founded in 2019 to share a passion for quality craft whiskey and the Central Coast. Each handcrafted spirit is Cut With The Pacific™ using purified desalinated ocean water, capturing the soul and essence of the waters that united the duo. The SLO Stills lineup of California whiskeys have garnished numerous accolades including being named one of Wine Enthusiast’s Top 100 Spirits of 2020, and are available in stores throughout California.