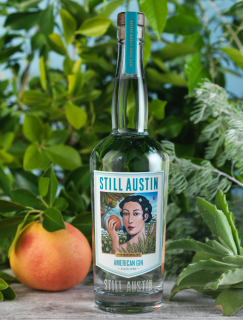 Austin, TX – Still Austin Whiskey Co., a homegrown distillery situated in the heart of South Austin, has released a full packaging rebrand for its signature American Gin, the first rye gin made in the Lone Star State. The 100% handmade gin is uniquely crafted from a custom base of 70% Brasetto rye and 30% non-GMO white corn provided by Texas farmers. The spirit is then milled and distilled in-house in small 100-gallon batches in a copper pot still. It’s here that the distilled base spirit absorbs the various gin botanicals, including organic juniper berries, coriander seeds, cinnamon, citrus peels, elderflowers and allspice berries, while passing through the distillery’s 42-foot-tall custom column still. The end result is a perfectly balanced gin bottled at 90 proof (45% ABV), which features an initial brightness, creamy mouthfeel, soft floral and citrus notes, an earthy character, rye spice and a warm finish. In the words of Master Blender Nancy Fraley, who’s famous for her peerless ability to detect flavor notes, the gin is “exceptionally balanced, beautifully blended, and a pleasure to drink.”

For the new custom gin label, Still Austin commissioned internationally acclaimed artist and native Texan Marc Burckhardt to paint a series of portraits of “idealized” Austinites. These are visual representations of archetypes, a way of conceiving a “new Austin mythology” by celebrating the innovative people who make the city what it is. Each label provides a sense of the people who have influenced and inspired the team, while paying homage to the Texas terroir. The first label in the series, released last July, featured “The Musician,” the figure gracing the distillery’s Straight Bourbon label, which pays homage to the “Live Music Capital of the World.” Now the American Gin, also known as “The Naturalist,” becomes the second in the series. The woman in the picture is content: surrounded by lush landscape, inspired by majestic beauty and satiated with the Earth’s raw treasures, including the spirit’s multitude of botanicals hidden among the verdant surroundings.

“For The Naturalist, we make a custom, in-house base distilled at a lower ABV than your traditional grain neutral spirit,” said John Schrepel, Head Distiller. “The result is an approachable gin with structure and nuance that highlights 12 botanicals, which complement the unique rye base and create a well-rounded, complex experience.”

Still Austin is an independent craft whiskey distillery founded in 2015, focused on a true grain-to-glass concept that produces the highest quality whiskey using local resources and sustainable practices. Like “The Naturalist,” Still Austin views itself as an integral part of a larger landscape, aiming to let the natural world shine through its work as distillers. In pursuit of this goal, the team makes everything from scratch—milling the grains, fermenting the mash, and distilling the spirit in two types of stills—until they’ve created a perfectly balanced gin, made in small batches with real botanicals.

In August of 2020, the New York International Spirits Competition named Still Austin its “Texas Gin Distillery of the Year.” The distilling team is led by Head Distiller John Schrepel, Master Blender Nancy Fraley and veteran Master Distiller Mike Delevante, one of the most experienced and respected distillers in North America who designed the Still Austin distillery to make the highest quality of bourbon. That includes a 42-foot custom-made column, “Nancy,” (and her sister copper-pot still, “The Queen”) which give the distillers serious creative license to create unique new flavors and spirits.

Still Austin’s gin is now available for order online via the Still Austin website: stillaustin.com/booze/american-gin/. In the coming weeks, gin lovers will begin to see the brand throughout Texas in both 375ml and 750ml bottles at fine liquor stores for a suggested retail price of $16 and $32, respectively.

Founded in 2015 by three Austin families, Still Austin Whiskey Co. is a true grain-to-glass distillery, located at 440 East St. Elmo Road in the heart of Austin, Texas. All spirits are hand crafted using grains grown by Texas farmers. Still Austin’s collection of spirits includes the flagship Straight Bourbon Whiskey (aka “The Musician”) and American Gin (aka “The Naturalist”). Still Austin places a high value on sustainability, with a focus on cutting carbon emissions through local sourcing, increasing the biodiversity of the region through heritage grains, returning spent grains to local ranchers to feed their animals, and operating a distillery that is designed for energy efficiency and water conservation.