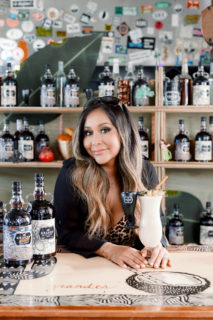 JERSEY CITY, NJ – The Kraken Black Spiced Rum is celebrating cities across the U.S., buying local bar-goers their first rum of summer, and releasing The Kraken Attacks limited edition bottles complete with squid-hunting prizes. With the help of icons representing their hometowns like Nicole “Snooki” Polizzi (Jersey Shore), Mike Ditka (Chicago), and Angie Martinez (New York City), The Kraken Rum is offering a free Kraken Rum cocktail to rum lovers 21+ through July 5 to kickoff summer and get Americans back into their favorite watering holes.

Each of our hometown heroes has had a recent run in with the monstrous beast, The Kraken – with sightings on the Jersey Shore Boardwalk, outside the bars of Chicago, and in the streets of New York City – and they didn’t back down when it came to defending their local bars. To mark the release of 19 new The Kraken Attacks limited edition bottles, see our cultural icons facing down the giant celaphod in a new video.

The Kraken Attacks limited edition bottles feature one-of-a-kind illustrated artwork, each displaying the Kraken’s tentacles wrapped around iconic monuments in different US cities or states. Fans 21+ can collect their local bottles and enter for a chance to win prizes, from instant wins of custom glassware to the grand prize – a squid-spotting excursion in Hawaii.

“The Jersey Shore is nothing without its boardwalk bars and delicious cocktails, so it was a no-brainer to team up with The Kraken Rum to kick off summer right – with a free Kraken Rum cocktail and a limited edition bottle for my home state,” said Nicole “Snooki” Polizzi. “This is my stomping ground and the bars here hold a special place in my heart, so let’s go Jersey Shore – drinks are on us!”

“‘Local watering holes have been the pulse of Chicago for as long as I can remember, especially after a big hometown win,” said Coach Mike Ditka. “I couldn’t be happier to finally be able to celebrate the reopening of these favorite local spots with The Kraken Rum, and for Chicagoans to mark the occasion with a free rum cocktail at da bars!”

The Kraken Rum will also match every free cocktail reimbursed with a further donation to the United States Bartenders Guild Foundation’s Bartender Emergency Assistance Program. To redeem your free drink, rum lovers 21+ can simply buy a Kraken Rum pour or cocktail, take a photo of the itemized receipt and upload it through August 5. Valid receipts will receive a reimbursement of up to $10 (paid via Venmo or Paypal). Official terms and conditions can be found at krakenkoupon.com.

About The Kraken Black Spiced Rum