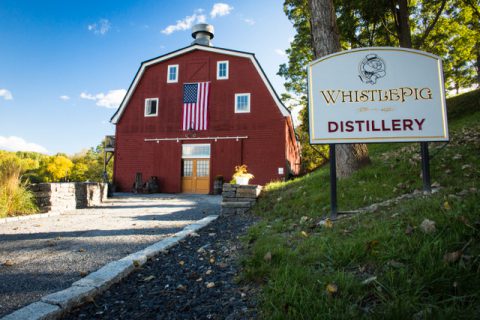 Middlebury, Vt. — WhistlePig Whiskey, #1 distiller in the ultra-premium and luxury rye whiskey category in North America, is pleased to reveal its first ever 100% grain-to-glass whiskey from the WhistlePig Farm. To unveil this one-of-a-kind offering, WhistlePig has enlisted Mecum Auctions, the world leader in live auctions of collector and classic cars, antique motorcycles, vintage tractors and Road Art memorabilia with events across the U.S., to auction off the first barrel from the Beyond Bonded collection. The barrel will be auctioned off LIVE on Saturday May 15th at Mecum’s Spring Classic event in Indianapolis, and portions of the auction will be broadcast on NBC Sports nationwide.

Proceeds from the winning bid, which is expected to command a price similar to that of an exclusive car often sold at Mecum auctions, are to be donated by WhistlePig to Farm Aid, a non-profit organization that promotes and works to build a strong, resilient family farm system of agriculture that benefits farmers, eaters, communities and our soil and water.

The auction lot will include Barrel No. 0001 of WhistlePig Beyond Bonded FarmStock Rye, bottled by hand as two hundred 750ml units. This Straight Rye Whiskey is crafted from 100% Remington Rye harvested on the WhistlePig Farm, distilled and proofed with local water, and aged in Vermont Estate Oak casks for 4 years, 8 months and 14 days. It is bottled at 100.1 proof, a hair beyond the 19th century Bottled in Bond requirement of 100 proof. The winning bidder will also receive the empty barrel and a grain-to-glass experience at the WhistlePig Farm & Distillery in Shoreham, Vermont.

“The rare whiskey auction and investor world has been incredibly exciting to watch, but so far largely dominated by scotch. When our first barrel of Beyond Bonded was ready, we knew it was time to get involved, and lead the American Whiskey category in this space,” says Jeff Kozak, CEO, WhistlePig Whiskey.

Whiskey fans across the country are encouraged to join the bidding war for the first Beyond Bonded barrel by visiting mecum.com to register before the auction on May 15th. Collectors outside Indianapolis will be able to bid online before the event and/or live on the phone.

“FarmStock Beyond Bonded is our boldest dream yet. Each individual barrel is an untapped expression of the WhistlePig Farm. We’re thrilled to align with Mecum and Farm Aid, Mecum has the perfect platform to unveil a whiskey of this magnitude and we are so pleased to share that 100% of the proceeds from the winning bid will be donated to Farm Aid, further emphasizing our commitment to supporting sustainable farming and farmers in the United States,” says Emily Harrison, Lead Distiller, WhistlePig Whiskey.

“We welcome the opportunity to bring this unique offering from WhistlePig to our customers and clientele, especially in support of a worthy cause like Farm Aid,” said Mecum Chief Operating Officer Sam Murtaugh. “Our team is looking forward to helping raise awareness and support for sustainable farming nationwide.”

“Farm Aid loves to share innovative and inspiring stories of farm to market success, and we congratulate WhistlePig on making Farm Stock Beyond Bonded Whiskey from rye grown on its own soils.   Proceeds from the Mecum Auction for Farm Aid will benefit farmers whose essential work provides for all of us and cares for the soil and water,” said Glenda Yoder, Associate Director, Farm Aid.

Further information on FarmStock Beyond Bonded Rye Whiskey will be released later this month. In the meantime, fans can find WhistlePig’s current FarmStock Rye expression, a Rye blend with 52% farm-to-glass whiskey released in 2019, online.

About WhistlePig Whiskey Founded in 2007, WhistlePig has become the #1 distiller in the ultra-premium and luxury rye whiskey category in North America, featuring the bold and often untapped flavor of Rye. WhistlePig is leading a surge of innovation in the emerging field of North American whiskey. As the most decorated Rye whiskey – having received the coveted ‘Best in Show Whiskey’ title from the 2017 San Francisco World Spirits Competition, WhistlePig is widely viewed as the world’s finest Rye. With the opening of its distillery on its 500-acre Vermont farm in the fall of 2015, WhistlePig has also become one of the leading farm-to-bottle Rye whiskeys in the world.

About Farm Aid Farm Aid’s mission is to build a vibrant, family farm-centered system of agriculture in America. Farm Aid artists and board members Willie Nelson, Neil Young, John Mellencamp, Dave Matthews and Margo Price host an annual festival to raise funds to support Farm Aid’s work with family farmers and to inspire people to choose family farm food. Since 1985, Farm Aid, with the support of the artists who contribute their performances each year, has raised more than $60 million to support programs that help farmers thrive, expand the reach of the Good Food Movement, take action to change the dominant system of industrial agriculture and promote food from family farms.