In a combined awards ceremony and postgame interview session, BevNET handed out its Best of 2010 awards during a dinner held as part of the BevNET Live winter event in Santa Monica.

ZICO Coconut Water founder and CEO Mark Rampolla took home the award for Innovator of the Year following a period in which he navigated the brand through supply shortages plaguing the entire category by moving a concentrate version of his product into a new, more mainstream plastic bottle. Rampolla also entered into distribution agreements with Coca-Cola in key areas, matching its rivals O.N.E. and Vita Coco, both of which were able to increase their distribution footprints through PepsiCo and Dr Pepper Snapple, respectively.

Meanwhile, product of the year went to GT’s Kombucha, a drink whose fast-growing popularity came into sharp focus in the midst of category-wide turmoil resulting from a Whole Foods decision to pull all unpasteurized kombuchas from its shelves due to concerns that it contained alcohol. While the category is still finding its feet following the summertime supply disruption, BevNET chose GT’s products because of the breadth and intensity of the outcry among its fans after the product left Whole Foods to work on a new formulation.

“For a lot of them, it seemed like it was the worst possible thing that has ever happened,” Craven said.
Also recognized during the Best of 2010 awards were many products from the natural foods world, including lemonades, teas, CSD’s. The full list follows: 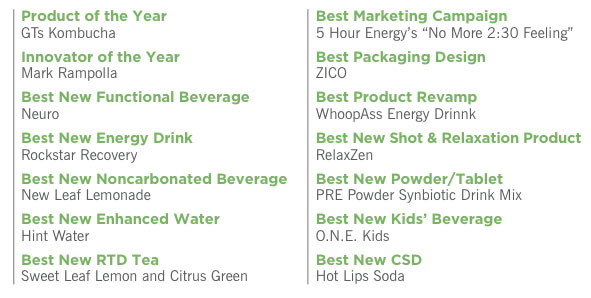 BevNET Live Wraps Up, Looks to Summer in NY

With more than 330 beverage professionals gathered in Santa Monica for two full days of learning and networking, and speakers ranging from Honest Tea founder Seth Goldman and Carl Sweat, CEO of FRS, along with Jones Soda CEO Bill Meissner and First Beverage Group CEO William Anderson, BevNET Live Winter 2010 offered too many highlights to be detailed without the aid of a multi-gigabyte Internet cloud for photos and video.

Nevertheless, it should be noted that the event gave entrepreneurs in the industry a chance to flex their muscles and grab some much-needed recognition. Whether it was Anheuser-Busch distributors making it clear that new brands are the lifeblood of their growing total beverage strategy or investors indicating that there is more money than ever waiting to find beverage companies with certifiable potential, the two days on the beach were also two days in which competition and community could dwell side by side.
Full highlights – including videos of speeches, panels, and breakout sessions, and a massive collection of photos from the event – are available at BevNET.com. The next event, BevNET Summer 2011, is scheduled for June 6 and 7 in New York City at the Sheraton Tower.