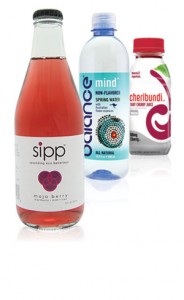 Apparently, a sip of the beverage business isn’t going to satisfy the team at Greenwich, Conn.-based Emil Capital Partners.

The private equity company, which manages investments for the family office of a large German private label manufacturer, has made its third beverage investment in less than a year, adding fledgling premium soda brand SIPP to a group that also includes Cheribundi and Balance Water.

Sipp, which debuted at the Natural Products Expo East show in October, 2010, is expanding its three-flavor line to include two more, Berry Rhubard and Lemon Flower. The brand has minimalist logos and 12 oz. glass bottle packaging, and is sweetened with agave nectar to keep calories down.

The investment was for an undisclosed amount; it was the first significant financing round for the self-styled “eco beverage,” which was begun by a Pennsylvania mixologist named Beth Parentice.

Living Harvest had nearly $5 million in annual sales when it was selected as number 777 in the Forbes 1000; the company boosts Healthy Brands Collective revenues to nearly $10 million. The acquisition company announced plans to go public in 2010 but has not done so yet — it has more deals in process and is in the middle of its “quiet period” before a late 2012 or early 2013 IPO.

Cell-Nique was introduced by the Ratners in 2006 after an earlier career in health care investment. The company announced in March that it was forming Healthy Brands Collective as a corporate entity to acquire health-oriented CPG companies that had similar routes to market and potential sales and distribution synergies.

Silverwood Partners represented Living Harvest in the transaction, making it the fourth beverage investment the company has shepherded in 2012.

Ecuadorian energy blend Runa received a little stimulation itself recently in the form of a $3 million round of financing from a variety of investors, which closed in late August.

The round of financing is intended to help the company expand its marketing and sales operation, as well as to help the company establish a second factory in Ecuador for the processing of Guayusa, the plant that offers the tea-like beverage its flavor, character, and caffeine lift.

“We’re doing expansion on the West Coast, trying to build out New York and New England some, and investing in more marketing,” MacCombie told BevNET. “From an infrastructure point of view, we’re probably approaching capacity right now. A new factory allows us to keep growing.”

Most of the investment came through a group of angels including the Swiss social investment fund responsAbility and adman Richard Kirshenbaum, who is expected to help the company’s branding push as well.

The company currently has 12 employees in the U.S. and 35 in Ecuador.

Sparkling probiotic drink KeVita has closed a round of financing. The brand is touted as a less-vinegary but still probiotic beverage co-founded by nutritional consultant Chakra Earthsong Levy and winemaker Bill Moses.

The eight-flavor line has both caffeinated and decaffeinated versions that involve blending a probiotic culture with a base of coconut water, tea, or fruit.

The company debuted at Natural Products Expo West in 2010 with a head of steam, quickly gaining Whole Foods approvals.

Silverwood Partners shepherded the deal. No telling the amount invested although Greenwich firm KarpReilly shoots for placements of $10-$75 million, according to company information. One of the fund’s co-founders, Allan Karp, is joining the KeVita board of directors, as is Silverwood advisor Brad Barnhorn.