It turns out that even beverage giants aren’t immune from the recent outbreak of lawsuits infecting the industry. In April, Coca-Cola was hit with a lawsuit claiming that the name and marketing of the company’s Simply Orange brand are misleading. The suit, filed in an Illinois

federal court, contends that the beverage is not simple orange juice; rather, it is juice that is heavily processed and contains added flavorings and constituents to change its color, consistency, taste, and aroma.

In the lawsuit, plaintiff Randall Davis states that chemically engineered “flavor packs” are added to Simply Orange, yet consumers pay a premium for the product based on their belief that the juice fresh and untainted by artificial ingredients. The lawsuit claims “Coca-Cola misrepresented that Simply Orange was 100% pure and natural orange juice when in fact it was not.”

Davis is accusing Coke of fraud and misrepresentation and pursuing class-action status.

In response to media inquiries about the lawsuit, Coca-Cola spokeswoman Susan Stribling  stated, “This lawsuit has nothing to do with misleading consumers and everything to do with lining class action lawyers’ pockets … it is a meritless case against which we will vigorously defend ourselves.”

A federal judge smacked down a class action lawsuit filed against the makers of Muscle Milk, saying the plaintiff hadn’t met the standard of proving the marketing of the brand is false and misleading.

The plaintiff, Claire Delacruz, alleged that Cytosport Inc., which manufactures Muscle Milk and other ready-to-drink and powdered sports-related beverages, is in violation of multiple California consumer protection laws including false advertising and negligent misrepresentation, by leading consumers to believe that Muscle Milk products are healthy and nutritious.

Delacruz claims that while Cytosport markets Muscle Milk as a product that “should be regularly consumed to help them diet and live a healthy lifestyle,” she notes that almost 50 percent of the products’ caloric content comes from fats, and “are equivalent to fat-laden junk food.”

Although U.S. District Judge Claudia Wilken agrees that Cytosport’s claims that Muscle Milk contains “healthy fats” and that the product is a “nutritional shake” might mislead consumers, she stated that Delacruz’s complaint lacks sufficient detail for the suit to proceed. Wilken noted that “the term ‘healthy’ is difficult to define and plaintiff has not alleged that the drink contains unhealthy amounts of fat, saturated fat or calories from fat, compared to its protein content, based on any objective criteria.”

Delacruz had seven days to appeal the ruling via an amended complaint.

Coca-Cola Co., Inc. and PepsiCo, Inc. both said they will change the way they add caramel  coloring to their flagship sodas after a study by the Center for Science in the Public Interest revealed the presence of a carcinogen in some containers.

The changes were made to avoid a California law requiring products that contain known carcinogens to put a cancer warning on their labels.

The companies said they had instructed their manufacturing facilities to change the process by which the caramel color is produced.

CSPI found the presence of low levels of the chemical 4-methylimidazole in some samples of Coca-Cola and Pepsi during tests it had run in February. As a result, the organization had petitioned the Food and Drug Administration to ban the use of caramel coloring manufactured in a way to yield the byproduct.

The American Beverage Association also released a statement that its member companies would adjust their own caramel coloring processes to meet the California standard, although products already on the market were not a reason for health concerns.

According to the FDA, consumers would need to drink hundreds 1,000 cans of soda a day — or more — to cause any concern, although CSPI disputes that, saying any carcinogenic presence should cause concern.

In recent years Senate Majority Whip Richard Durbin (D-Ill.) has pushed for increased oversight of the food, beverage and supplement industry on many fronts; recently he sent a letter to FDA Commissioner Margaret Hamburg to investigate the caffeine content in energy drinks.

Durbin said the letter came after he learned the story of 14 year-old Anais Fournier, who died last December of a 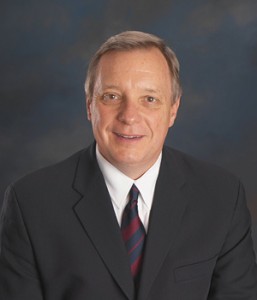 Fournier’s mother has been actively telling her daughter’s story since then and is pushing for increased legislative action and parental awareness concerning energy drinks.

“Consuming large quantities of caffeine can have serious health consequences, including caffeine toxicity, stroke, anxiety, arrhythmia, and in some cases death. Young people are especially susceptible to suffering adverse effects because energy drinks market to youth, their bodies are not accustomed to caffeine, and energy drinks contain high levels of caffeine and stimulating additives that may interact when used in combination,” wrote Durbin in his letter to Hamburg. “The glossy marketing tailored to youth has worked – 30 to 50 percent of adolescents report consuming energy drinks.”

Durbin contends that while many energy drinks are marketed as dietary supplements, the FDA does have the ability to enforce caffeine limits and additives in the products if they are being sold as beverages.

“Most energy drinks are currently marketed as dietary supplements, therefore they do not need to establish evidence of their products’ safety or adhere to a limit on the level of caffeine. At the same time, many energy drinks come in single-use containers ranging from 8oz to 32oz and are marketed like beverages. Rockstar Energy Drink’s website says, ‘enjoy this fully refreshing lightly carbonated beverage.’” he wrote.  “If the FDA makes a determination that energy drinks are beverages with high levels of caffeine and additives that raise safety concerns, the agency would have the authority to limit the level of caffeine and require the manufacturers to provide scientific evidence that ingredients such as guarana, taurine, and ginseng are safe for their intended use and in combination with caffeine and other energy drink ingredients.”