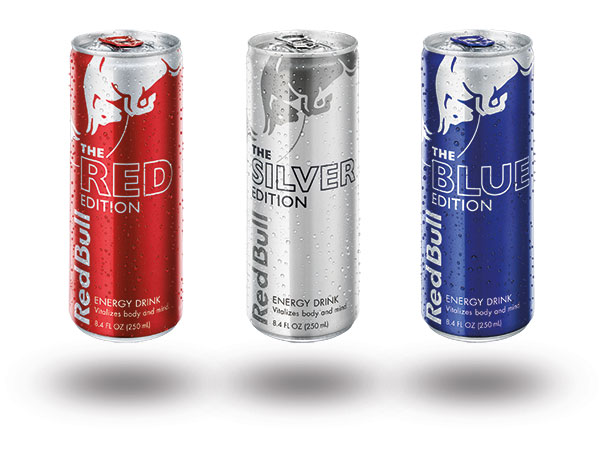 It’s not so much been a long time coming as it is a long way for them to come, but Red Bull finally announced that it was going to move three flavored line extensions from overseas into U.S. markets as part of its push at NACS.

The company will debut cranberry, lime and blueberry flavors – called Red Edition, Silver Edition and Blue Edition – in March, 2013 as single 8.4 oz. cans and 4-packs that will be line-priced with other Red Bull SKUs.

Between the new Red Bull Editions products and the Red Bull Total Zero addition earlier this year, it’s been a veritable blizzard of innovation from the company, which has long had a reputation for staying the course in terms of new product development.

The idea behind bringing the flavored products – already available in Austria, France and other European countries – to the U.S. is primarily to continue growing the category, according to Red Bull’s marketing chief, Amy Taylor.

“We are still really focused at Red Bull on growing the base,” Taylor told BevNET. “Taste remains a barrier to entry to the category, so we’re trying to lower that. In terms of perception and reality it’s good to have extra options.”

The introduction of the flavors may have taken a long time compared to products that debut with multiple varieties and sizes, but the slow-and-steady approach is one that Red Bull has followed for years. It’s hard to believe in a category expected to reach nearly $12 billion by 2016, but for Red Bull, the notion of the category reaching maturity is one that is far off.

“We have a very small but loyal user base vs. the rest of beverage,” Taylor said. “Maturation is not within sight right now. I think we’re in our adolescence.”

Sharpening its focus on growing trends of health and wellness, Bai Brands has quietly phased out its original line of coffee fruit-infused drinks in favor of its five-calorie Bai5 line. According to Bai Brands founder Ben Weiss, the company ceased production of the original line “about three months ago,” and has set sights on careful expansion of the Bai5 brand with a goal of national distribution by the first quarter of 2014.

“Bai5 and its positioning are so on-trend right now, it made the other line obsolete,” said Weiss.

Weiss said that “the writing was on the wall” in June when the company launched new distribution in New York City and completed its roll-out of all original Bai flavors to Bai5. At that point, Weiss felt that the company would be challenged to find shelf space for both lines, particularly in the grocery channel where the brand has its deepest presence. Weiss said that Bai’s distributors were enthusiastic about the decision to discontinue the full calorie line and that the transition has been an easy one for the company. However, he noted that while Bai enjoyed “tremendous VPO” in grocery stores, the company was attempting to figure out a effective convenience store strategy for the brand.

Since June, Bai has racked up some key wins with new retail authorizations in Gelson’s, which operates 17 supermarkets in Southern California and Stew Leonard’s, a family-owned chain of supermarkets with locations in Connecticut and New York. Bai has also recently made a deeper push into California having signed a deal with Santa Barbara-based Pacific Beverage Company earlier this month. The company is also represented throughout Southern California by Haralambos Beverage Co. as well as Dr Pepper Snapple Group in metro New York and New Jersey and counts premium grocer Wegman’s and Ralph’s as its top retailers.

To buffer its expansion, Weiss said that Bai would begin to lean heavily on former Vitaminwater marketing chief Rohan Oza, who is an investor and advisor in the company. Oza is “really getting involved” with new marketing initiatives and will attempt to draft a team of key influencers to engage new consumers.