Normally, we’d do a “Top Ten,” but with the year being what it was and all, we couldn’t resist the chance to go to 11. Here’s hoping that the craft beer business busts through even that Spinal Tap imposed ceiling and beyond in the New Year. Until then, cheers!

11. Best Managed Potential Demand Crisis – Victory Brewing Headwaters Pale Ale
After originally being part of the “Pursuit of Pale Ale” series, the Headwaters Pale Ale officially moved year-round in February. Turns out the Bill Covaleski and the folks at Victory know what they are doing. The beer sold through faster than anticipated and the brewery couldn’t supply the demand nationwide. Except in their home market, Headwaters experienced a quick disappearance on retailers’ shelves between July and October until the company could purchase its 2012 allotment of citra hops. The company then over-purchased for 2012 and shuffled the brewing schedule to produce more Headwaters when they received the shipment in October – quenching thirsty drinkers’ thirsts everywhere.

10. Best New Year-Round Offering: Widmer Pitch Black IPA
In 2010, black IPAs emerged as a new style that had staying power. One of the early adopters of the trend, Widmer Brothers, originally released their ‘Pitch Black IPA’ offering into the ‘W’ series in the early part of 2010. Pitch Black outperformed previous W releases like Brrr and Drifter – which have both since become year-round offerings. After seeing the success, Widmer made the decision to take the beer year-round in 2011. It was the company’s first new nationwide release since Drifter Pale Ale in 2008. The beer launched on February 21st and is now one of the brewery’s top-selling selections behind the Hefeweizen and Drifter brands.

9. Best New Package
Design/Decision:
Sixpoint Craft Ales
2011 was definitely a breakout year for canned craft beer, although the move into the metal package has been on the rise since 2009, when Charlie Papazian, president of the craft beer trade group the Brewers’ Association, noted that the number of craft breweries canning their beer was just 52. Craftcans.com, a website that tracks craft beer in cans puts the current number at 148. And not a single craft brewer transitioned into the package better than Brooklyn’s Sixpoint. In May, the company capitalized on growing awareness of the brand by announcing it would be expanding from a draught-only distribution model to 16 oz. cans. With sleek graphics, detailed design and an excellent price point, Sixpoint has quickly become a standout on the shelf.

8. Best Collaboration:
Baird/Ishi/Stone Green Tea IPA
It’s no secret that craft brewers love working together and 2011 certainly saw its fair share of collaborations. But these mashups can be tricky: they often end up turning into a competition to see who can brew with the most unique ingredients. Nobody bridged the gap better — and for a better reason — than Stone Brewing Co., which teamed up with Bryan Baird (Baird Brewing Company, Numazu, Japan) and Toshi Ishii (Ishii Brewing Co., Guam) to brew a one-time beer for tsunami relief. Sencha, a variety of whole leaf Japanese green tea, was used in the dry hopping phase. The brewers also experimented with lesser-known hop varieties to create an incredibly quaffable 9.2 percent IPA. All $64,000 generated from sales of the beer benefited the Japanese Red Cross Society. 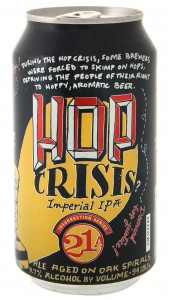 7. Best New IPA/Double IPA:
21st Amendment Hop Crisis
As IPAs passed Pale Ales earlier this year to become the country’s most popular year-round style, ranking second in dollar sales only to craft seasonals, it’s quite clear that consumers are craving more and more IBU’s. That means more brewers are doubling down on Double IPAs. The newest beer to enter the Double IPA category arrives by way of Nico Freccia and Shaun O’Sullivan at 21st Amendment. Hop Crisis boasts 94 IBU’s, and it’s noticeable. And at 9.7 percent, only a handful of other beers in the category have a higher ABV. Hop Crisis stands out on the shelf, too — 21st Amendment is consistently referenced as a leader in design and packaging amongst craft brewers.

6. Biggest Beer Headline:
Goose Island Acquired by
Anheuser-Busch
The Goose dropped a bomb on the industry just as folks were settling back in from an inspiring Craft Brewers Conference in March. Goose founder John Hall described the sale as more of a partnership, allowing Goose Island to grow and continue to develop new beer styles. As the news spread, the craft beer blogosphere reacted with fury — but while beer geeks may have been upset with the sale, the deal set an important precedent for future craft acquisitions.

5. Emerging Trend:
‘Session’ Beers
Though the trend towards higher ABVs certainly isn’t going away anytime soon, some brewers challenged that in 2011 with ‘session’ offerings. Massachusetts start-up Notch Brewing, for example, is brewing nothing but full-flavored beers under 4.5 percent ABV. Other breweries continue to release new session offerings and even re-brand existing beers under the ‘session’ moniker. Most recently, Shmaltz Brewing announced that, going forward, Hebrew Genesis would be described as a dry hopped session ale.

4. Best Growth Year:
Ninkasi Brewing
Ninkasi’s growth was well-documented in 2011, even in industry conference calls. Just eight months into the year, the brewery was the leading craft beer vendor for new product dollar sales, according to Symphony/IRI data. Ninkasi will finish the year brewing over 57,000 barrels, 26,000 more than 2010, and flagship offering Total Domination IPA was up over 50 percent on draught. The brewery also introduced a seasonal box set of four 22 oz. bottles, as well as two new packaged beer selections. The company is outpacing New Belgium for growth through the first 5 years in business, and accomplishing all that growth in its existing markets (AK, OR, WA, ID and San Francisco, CA).

3. Breakout Brewery:
Sun King Brewing
If you hadn’t heard of Sun King Brewing before the Great American Beer Fest, you certainly found out about it after. The brewery took home an impressive eight GABF award medals – four of which were gold. 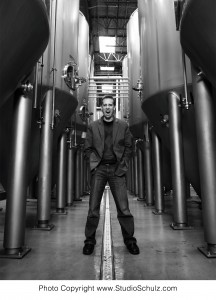 2. Best New Brewery:
Baxter Brewing
No startup brewery in the country has experienced instant success quite like Baxter Brewing. Founder and President Luke Livingston launched the brand into Maine markets in January and the company is on pace to brew over 5,000 barrels of beer in its first calendar year. Baxter Brewing brewed, packaged and shipped two styles of beer throughout Maine and also entered Massachusetts in August. Livingston said he plans to enter New Hampshire and Vermont in 2012.

1. Person of the Year:
Greg Koch, Stone Brewing Co.
Nobody in craft beer was busier this year than CEO and Co-Founder of Stone Brewing Greg Koch. Koch co-authored a book, announced $26.6 million in expansion plans that include two new locations and a hotel, and picked up an Ernst and Young Entrepreneur of the Year Award in the process. Koch did all of this while continuing to remain environmentally conscious. He drives a Chevy Volt, thinks locally while growing globally and never stops advocating against ‘fizzy yellow beer.’ Cheers to 15 years in business, Greg.