Call it the next stage in product evolution for those the kids who just couldn’t get enough Capri Sun.

Long the signature package of the popular kids’ juice brand, pouches are being hailed as a simple, convenient, and, in the past year, extremely profitable package for marketers of malternatives and wine-based cocktails.

Within the past two years, alcoholic beverage companies have introduced a range of new pouch-packaged cocktails and frozen drinks, promoting them as a way to enjoy the beverages without the effort and occasional mess associated with their preparation.

The new package has caught on quickly: according to recent data from the consumer research firm A.C. Nielsen, sales of pouch-packaged alcoholic beverages leaped from $12 million in sales for the 12-month period ending in August, 2010 to nearly $200 million for the 12 month period ending on August 18, 2012. Incredibly, the jaw-dropping increase may be only the start of the trend.
Danny Brager, the vice president of Beverage/Alcohol Practice for Nielsen, indicated that, based on recent research, sales of alcoholic drink pouches are likely to remain on an upward trajectory. Brager cited rising consumer trial of the products as a key factor in rising sales, noting that 12 percent of alcoholic-beverage buyers purchased a pouch product in the last year, nearly twice the number of people who bought one in the previous year.

Brager noted that both consumers and retailers have responded positively to the convenience of the package, which is most often used for single-serve drinks and sold in a variety of retail channels, including drug, grocery, and convenience stores. Moreover, Nielsen consumer research found that pouch products, which often have a lower price point than most beer and wine counterparts, are supplementing current alcoholic beverage sales, as opposed to taking market share from traditional segments.

“[Pouches] may be the catalyst for new drinking occasions, including on-the-go events,” said Brager. “Research indicates that about ten percent of the pouch sales volume comes from buyers new to alcoholic beverages, while about 50 percent of volume comes from consumers purchasing pouches in addition to other adult beverage categories.” 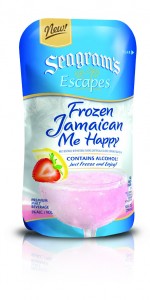 The company is now tracking nearly 100 alcoholic pouch products, and the number is growing. The increasing popularity of pouches has attracted the attention of a growing number of beverage marketers and conglomerates. Many of these companies have begun adding pouch package extensions to their current flavored malt beverage lines. They are also using the packaging format to develop new and innovative products.

Enlisting two of its best known trademarks, Diageo recently launched a new line of naturally-flavored, frozen malt beverage pouches for its Parrot Bay rum and Smirnoff vodka brands. The products are packaged in single-serve 10 oz. pouches, contain 5 percent alcohol by volume, and have a suggested retail price of $1.99. Each line comes in three varieties: Parrot Bay pouches feature a trio of island-inspired rum drinks, including two daiquiris and a pina colada, and the Smirnoff pouches offer a mix of vodka with lemonade and limeade flavors. Diageo, which introduced the drinks in June, positioned the drinks as alternatives to home-based, labor-intensive frozen cocktails.

“Frozen cocktails are a fun component to… celebrations, but the preparation and time needed to create these drinks sometimes takes away from the celebration itself,” said Patrick Hughes, the marketing director for progressive adult beverages, DIAGEO – Guinness USA.

Diageo may be the largest beverage player getting into the pouch business, but it is not alone. Building upon the success of its Seagram’s Escapes flavored malt beverage line, North American Breweries (NAB) debuted Seagram’s Escapes Frozen Flavors, a line of single-serve ready-to-drink frozen flavored malt beverages earlier this year. Packaged in 10 oz. pouches, the line comes in Margarita, Strawberry Daiquiri, Piña Colada and Sangria flavors, and each product has a suggested retail price of $1.99. NAB will be adding two new flavors to the line, Blue Hawaiian and Jamaican Me Happy, in March 2013.

The pouch craze has also opened up new opportunities for start-ups and smaller drink companies to get into the malternative and frozen cocktail business. Last year, Austin, TX-based DGI Beverage introduced BLACK iGUANA Margaritas & Cocktails, a line of wine-based RTD cocktails. The 10 oz. drinks have soared by 417 percent in revenue sales in the last year, according to the company, which recently launched a multi-platform social media campaign.

There may be no bigger indication of the draw of alcoholic pouch drinks than the blazing growth of Cordina. Launched in New Orleans in 2009, the frozen cocktail company sold $150,000 worth of its alcoholic pouches in its first 12 months. Just two years later, Cordina had annual revenue of over $4 million. Today, five varieties of the drinks are sold at Walgreen’s, Wal-Mart, and Winn-Dixie stores in 45 states for a suggested retail price of $1.99 per pouch.

Further growth? Looks like it’s in the bag – or the pouch.