By Max Rothman and Chris Furnari

Rising demand has made it a great time to be a craft brewer, but there are still branding, marketing and financial initiatives that can help breweries succeed in the business. 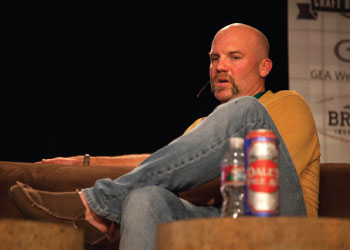 The interest in learning or sharing the best paths to that success is what motivated more than 130 craft brewers, distributors, and entrepreneurs to attend the Brewbound Session in San Diego on Nov. 29. They were treated to a full-day discussion of brand-building, risk-taking, and growth strategy – as well as the chance to sample each others’ products at several points along the way.

“Everything we do at New Belgium is about branding,” said New Belgium Brewing co-founder Kim Jordan during her keynote address, explaining the method her company has used to grow into the third-largest craft brewer in the country.

Jordan led off the day with a presentation that discussed the growth strategies for New Belgium since the company’s launch in 1991. Jordan explained the vision and execution required to grow a brand from just 225 barrels in year-one to over 770,000 barrels in year 20, saying that the founding mission – “to operate a profitable company that makes our love and talent manifest” – works in concert with the company’s goals of becoming a national brand by 2020.

“It comes down to those three tenets,” she said. “Profit, making sure the world we live in is loving, and that we’re excellent at the things we’re trying to do,” she said. 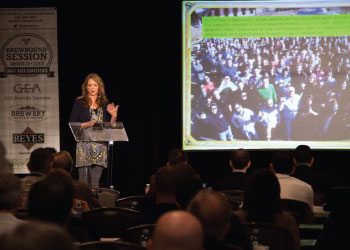 Jordan was asked about the role and importance of having a “flagship” beer in a portfolio full of unique offerings — and described a rare miscalculation in the company’s plans.

“When we started New Belgium, we thought that Abbey would be our flagship beer,” Jordan said. “Abbey was way too esoteric for the average beer drinker.”

While a flagship is important, assortment is becoming much more of a factor, she added, mentioning that most breweries used to lead with five mainstay offerings and add to their lineups  as growth permitted. Newer brewers have begun launching with 10-15 styles of beer in an effort to see what sticks – but they could be aided by market research, she said.

“It’s good to have a priority list,” Jordan said of brewers who are interested in trying to make a wide range of styles, “but beer drinkers massage that.”

Tony Magee, founder of Lagunitas Brewing Company, followed Jordan and provided a bit of comic relief and insight into a startup brewery created on “my wife’s kitchen stove.” That early bit of kitchen experimentation took years to turn into a full-scale brewery, but after many years of financial struggle his brand is on its way to building a new brewery in Chicago to accompany its Petaluma facility, he said. 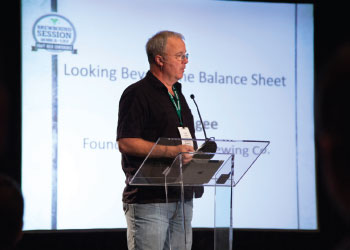 Magee echoed Jordan’s message on the importance of branding and explained his decision to make IPA the company’s flagship offering in an attempt to brand the style – much like Sierra Nevada did with its Pale Ale. When developing their brands, Magee cited literary hero Jack Kerouac in urging brewers to look deep, as he had, into the values and desires that lie at the bottom of the well of personality.

Magee owns one of the industry’s most iconic labels, and he knows it too.

“Not only has the [IPA] label become somewhat of an icon but you can see it from the parking lot,” he joked.

On the retail front, Meg Gill, co-founder of Golden Road Brewing, and Dwight Detter, a local forager with Whole Foods, shared a video outlining their partnership, sharing a behind-the-scenes, on-site look into the company’s growth. In the video, Golden Road brewmaster Jon Carpenter (who has since resigned) noted that 90 percent of Golden Road’s beer is sold within 50 miles of the brewery.

They offered tips on breaking into Whole Foods, suggesting that brewers not just have local facilities, but strong local ties at all parts of their production and supply chain, to truly sell the local story. 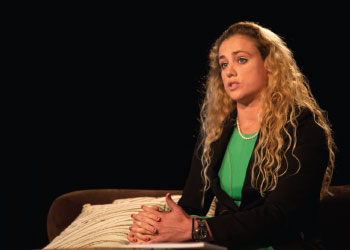 While Whole Foods can be a tough sell for new craft brewers, consumers are becoming a much easier sales target, according to Danny Brager, the head of the Nielsen Group’s Beverage Alcohol Team. Brager reinforced the opinion of many attendees that they are in the right industry at the right time, showing statistics that demonstrated craft beer had grown more rapidly than almost any other consumer packaged good — during a time when more than 60 percent of food and beverage product sales have been declining.

According to Brager there are nearly 50,000 outlets – both on-premise and off-premise –selling ‘some beer’ that weren’t three years ago.

One craft brewer who has begun breaking into those emerging channels is Dale Katechis, who pioneered the canned craft beer revolution in 2002, when he packaged his Oskar Blues Dale’s Pale Ale in aluminum. His own lessons on branding weren’t lost on Brewbound Session attendees either. Katechis broke up the place with the company’s ‘newest’ innovative packaging idea, that Dale’s Pale Ale IV.

While the gag drew its fair share of laughs from audience members, it also provided an important lesson on the importance of risk-taking. Prior to unveiling the IV bag, Katechis explained that the company has a “high tolerance for risk.” Apparently, that goes double for Dale

The next Brewbound Session will happen on May 2nd, 2013  at the Revere Hotel in Boston, Mass. For more information, please visit Brewbound.com/conference or call 617-231-8888.