From dreams of the perfect night’s sleep to hallucinations of a party in a can, the relaxation drink category has always seemed to invite extremes.

For example, a couple of years ago, while there were still just a few million dollars in sales floating around the category, business information publisher IBISWorld suggested that relaxation drinks were the top business opportunity in the U.S., with revenue growth forecast at 25 percent over the next half-decade.

In truth, the results haven’t yet been all that rosy financially. But things are changing: in addition to a pair of strong brands at the poles, there’s an emerging pack in the middle that is focusing on throttled-back ingredients. In fact, that pack is being prodded by Marley Beverage itself, one of the most successful brands in the category, which has recently left melatonin, the most active snooze-inducing compound, to the sleep side.  While efficacy is still important, these brands’ marketing push is toward chilling out, even focusing, instead of the promise of getting wasted.

First, the sleep side: DreamWater’s simple, straight-ahead approach to its functionality has helped it carve out a strong niche in mainstream channels, including Wal-Mart and other box and drug accounts. When it comes to sleep relief, it’s been so successful that it has even inspired natural products giant Hain to try to leverage one of its strongest properties, Sleepytime Tea, into a sleep-inducing melatonin-laced shot aimed at the convenience market.

But melatonin is being phased out for much of the rest of the category. While Drank was the first product to raise media and retailer awareness about relaxation drinks, the company quickly ran out of steam (perhaps it drank itself and fell asleep at the wheel?), it began to crater when it received a warning letter from the FDA. Since then, some products have continued to sit on the party side of the ledger, but with a mellower approach.

“Our product has always been for someone who wants to have a nice mellow relaxation or calming function,” said Lee Brody, Marley’s global marketing director. “It’s not meant to be anything more than that, and we don’t market it as such and don’t produce it as such. It’s simply meant to be something that can be enjoyed at a time when you want to chill out, chill down, calm down, and perhaps relax or even focus.”

Marley rose through deliberate execution, with a sales force that bore the torch for the DSD system and a carefully-designed strategy to win market after market. But along the way to becoming the next great party drink, at Marley, something happened: melatonin faded from the ingredient panel.

That Marley has continued to grow like a weed may indicate that when it comes to the non-sleep side of relaxation, there might be some payoff in playing it safe. 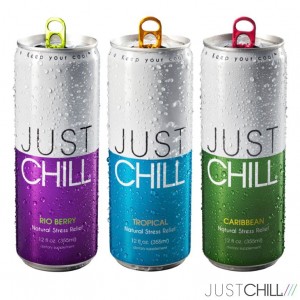 In fact, when moving from the extremes to the middle, Marley finds itself with a growing amount of functional company. Instead of getting knocked out, the next wave of relaxation drink consumers are trying to chill out, or even more, they’re trying to step outside of their stress and focus on something new.

On point with regard to that milder form of relaxation drink is three-year-old Just Chill, a California-based brand that is starting to emerge on the larger scene after tests in local retail markets. Just Chill’s founder, Max Bauman, said that from the start he wasn’t interested in making a “snooze booze” product, instead focusing on the ingredient L-Theanine. The amino acid, often found in green tea, is largely known for its ability to create focus in consumers; recently, Just Chill made a deal for a particularly potent, branded strain of the L-Theanine.

“We’re something that can take the edge off without making you tired,” Bauman said. “We want to stay on the relaxation drink side, but we’re more toward a focused and relaxed state of mind.”

They aren’t the only ones; other brands have also begun to spell out a functional difference. MiniChill, for example, has migrated its marketing platform from “relaxation” to “stress relief.” NVE has also begun marketing a shot with valerian root and passion flower, while RelaxZen has relaunched as Body Works, with both a “sleep shot” and a “Relax & Unwind” that features skullcap extract. Meanwhile, there’s Easy2Live’s Easy2Sleep, along with Easy2Focus and Easy2Relax – again, with the key difference the exclusion of melatonin in the latter two shots.

Why did this happen? Aside from regulatory issues, for a long time the poles of the category were playing off each other when the active ingredient – and the functional result – were much the same. And when you want to sleep, that function is often well-fulfilled by melatonin. Now, for those who want to enjoy their relaxation while awake, it looks like change has arrived, and it’s not so extreme after all.