We’re all for updating iconography, but are we headed for the days of Snap, Crackle & Chug?

It sure seemed that way in the spring and summer, when cereal companies like Kellogg’s and General Mills rolled out liquid breakfast products intended to take their brand equity from the table and transfer it to an on-the-go proposition.

For Kellogg’s, it’s come from Special K, which has recently expanded its $100 million line of Special K Protein Shakes to include new Special K Breakfast to Go and Special K Coffee House Breakfast Shakes, putting a bottled mix of cereal, liquefied protein and fiber into the hands of a growing number of (mostly female) consumers. Not to be outdone, Cheerios parent company General Mills has also been trying out its own dairy-based nutritional shake, BFast, in the Northeast. 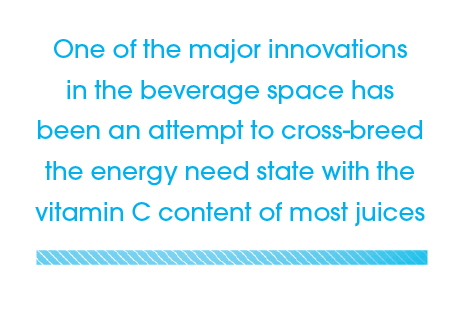 It shouldn’t be surprising to see traditional breakfast food producers chasing the liquid breakfast market, however; that’s because it’s becoming a can’t-beat-them-so-you-join-them-proposition.

“Smoothies and Nutritional Supplements being consumed by more people [for the purpose of replacing a meal] at the breakfast occasion,” notes  Lauren Masotti, a client executive for beverage with polling firm Kantar Worldpanel. “Smoothies have nearly doubled in the amount of people drinking for this reason.”

And the big food conglomerates are racing beverage companies to liquify breakfast. That’s because, overall, breakfast has grown in importance both in-home and for fast food and other foodservice operations, where grab and go smoothies and shakes are growing alongside hot products and cereals. The need to fill the breakfast belly coincides with key technological and branding advances – so that as these companies have realized that the addition of protein to juice could cause a major disruption to the breakfast event for consumers who have become increasingly time-pressed, the ability to add that protein and fiber has also improved.

“There are some changes in culture that are making this a slightly better opportunity than it was a few years ago,” said Howard Telford, a beverage analyst with the consulting company Euromonitor. “Busier lifestyles are always a trend here in the U.S. People are always in a rush, so anytime you can help people out there’s a benefit.”

That’s not to say that beverage companies hadn’t spent a lot of time thinking about breakfast already – from Java Monster (and before that, Rumba) to Mountain Dew’s new “Kickstart” drink, one of the major innovations in the beverage space has been an attempt to cross-breed the energy need state with the vitamin C content of most juices. That kind of incremental gain, Telford notes, has been most interesting to the big companies.

But there’s a larger wave on the way, one that PepsiCo CEO Indra Nooyi pointed to a few years ago when she started to refer to the “snackification” of certain types of beverages: liquid meals are on the rise, with representative RTD categories like smoothies and nutritional supplements steadily increasing in dollar share and shelf space.

For many entrepreneurial beverage companies, it’s the convergence of technology and nutritional demand that has created the opportunity for breakfast drinks to move off the perimeter of the placemat and into the center of the plate. That’s a new development, and one that is in line with ongoing changes in beverages’ ability to provide what consumers want from the breakfast occasion.

“It’s been a Holy Grail need state because there’s been very few items out there that satisfy the consumer,” said Greg Fleishman, a food and beverage consultant who has worked in marketing positions with companies like Sambazon, Coke and Kashi. “It’s always a viable occasion, but until recently, we’ve never seen things come together that could be mastered as convenient, tasting good, satisfying nutrition needs and filling you up.”

Supposed to be post-workout recovery drink, according to Fleishman, the product’s ability to provide protein and satiety on the go meant that it was “co-opted for breakfast.”

“Muscle Milk indicated that you could have a nutritious drink at breakfast time,” he said. “With Special K on the other side for females, the train tracks were really laid out.”

Earlier this year, Fleishman helped Sambazon roll out a breakfast smoothie of its own that featured not just protein but also filling “ancient grains” like amaranth and chia, along with its base superfruit Acai, as a way to try to get to that Holy Grail need state that he’d described.

But Sambazon wasn’t the only juice company angling to replace the morning meal. A few months before that rollout, juice company Bolthouse Farms debuted a pair of breakfast smoothies and a protein-enhanced coffee drink. That put it in front of its premium juice competitors Naked and Odwalla as the first to take a direct step into the breakfast space.

That doesn’t mean, however, that those brands weren’t aiming for the breakfast space themselves. In fact, with protein and vitamin-enhanced smoothies as a major part of their business, a full 20 percent of the smoothie space is consumed at breakfast, according to polling from the Kantar World Panel. Naked and Odwalla protein smoothies remain strong sellers. Naked’s Protein Zone was up 35 percent, to $66 million, year-over-year in supermarkets, drugstores, mass retailers and c-stores, according to IRI, a Chicago-based information company.

That’s just part of a picture that reveals a mealtime that is very important to niche beverage categories, according to the firm. Kantar’s polling reveals that 38 percent of a contiguous set of product categories like weight loss drinks (i.e. Special K, Slim-Fast) and 31 percent of nutritional supplement beverages (i.e. Muscle Milk) are consumed at breakfast. Meanwhile, the traditional beverage drink, orange juice, has been in decline for years, as consumers look for other nutritional benefits beyond vitamin C. 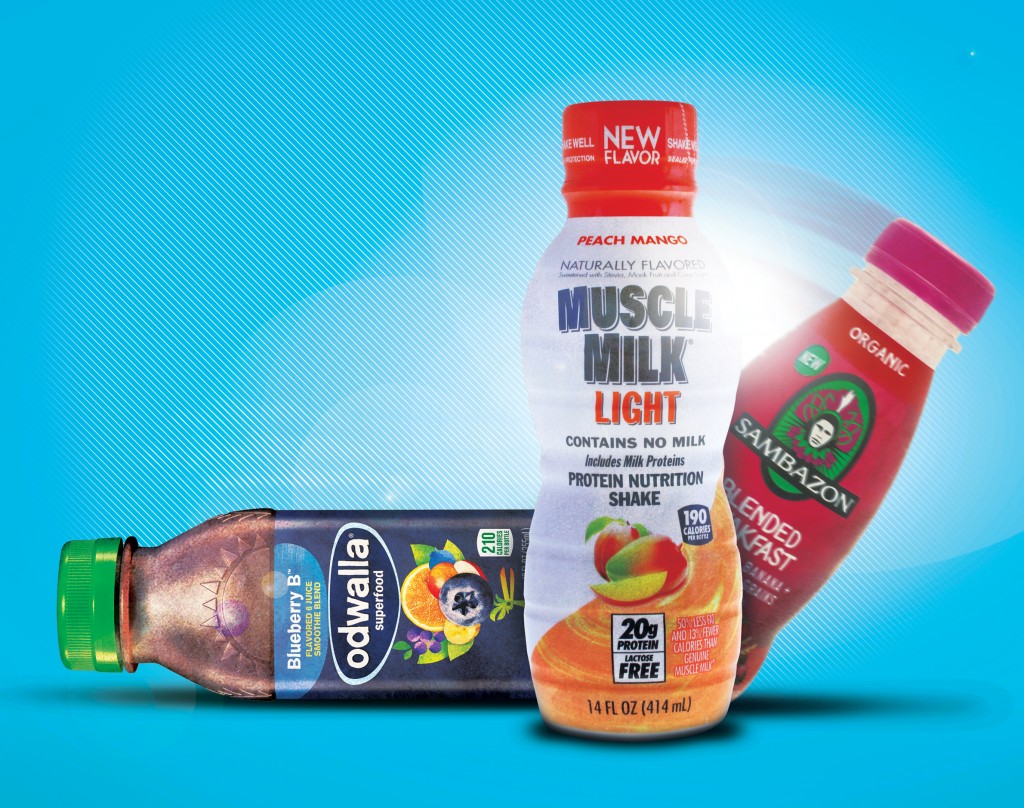 “You can look at this as people being exposed to that idea of a beverage as a meal replacement,” said Euromonitor’s Telford. “It might not be specifically branded that way, but it’s also about opening people’s minds up to the idea of a beverage for breakfast.”

That remains something of a long game for beverage companies, it should be noted. Much of the push at the RTD level remains at the incremental change level, according to analysts, who see more importance in the addition of caffeine to a juice than into the development of a new meal replacement format. In other words, beverages at breakfast are still more likely to be just beverages, but things are changing.

For example, traditional breakfast juices like orange or grapefruit have been declining for years, a change that Kantar’s Masotti ascribes to changing attitudes toward those key products.

“Fruit Juice is competing against a wider assortment of beverages than in the recent past,” she said. “People are less likely to be consuming 100 percent orange juice for its taste, nutritional benefit and replenishment. We do see vegetable juice growing at breakfast – consumers view it as more of a healthier choice and nutritional benefit to orange juice.”

Nevertheless, while more drinks might be replacing breakfast, the branding isn’t necessarily showing them to be aimed that way: many meal replacement brands feature an emphasis that is more on lifestyle than a focus on a specific meal – which may be why some of the bigger juice brands and supplement companies haven’t taken a more direct shot at the breakfast occasion (and why there aren’t any products branded as, say, dinner replacements). Still, breakfast’s place in beverage might be underscored even more more by the fact that breakfast foods like oatmeal are migrating back upstream a bit, as is evidenced by products like Sneaky Pete’s and Oatworks. Both incorporate oatmeal to create a heart healthy, fiber-packed product – one that isn’t geared toward breakfast by any stretch.

“The format takes a back seat to the claims they’re able to make about ingredients,” Telford said. “I feel like the major selling point with a Sambazon – even with a Naked or Odwalla – is on the ingredients and the wellness claims, and not the daypart.”

Nevertheless, those wellness claims and ingredients are increasingly tied to every meal, and there’s a strong cultural emphasis on that first meal, as well. Down the road, the battle for breakfast will likely only intensify.  Just look at a recent report on beverage innovation from supply firm Beneo, which identified liquid breakfast solutions as a top trend.

“There’s a lot more segmentation now,” Fleishman said. “At first it was how do you do a drinkable bowl of cereal, then a drinkable donut, then energy, and also the V8 style savory beverages that are popping up as well. There’s not a lot of overlap between drinkable cereal and more nutrition, but [juice and smoothie companies] are trying to overcome that.”