In Part I of “The Transforming Healthy Beverage Landscape,” I focused on which beverage companies (and private equity firms) own which “healthy” (subjective term) beverage brands. In this article, I want to explore why the larger companies acquire the smaller ones.

Interestingly, when many of the larger beverage strategic acquirers, like Coke and Pepsi, own healthy brands, they do not overtly advertise that they are the parent company or even have an association – like Honest Tea (Coke) and Izze (Pepsi). Honest Tea’s label has “Honest Tea, Inc.” as the company name and a Bethesda, MD, address. There is no mention of Coca-Cola or Atlanta. Izze’s label lists “Izze Beverages, Inc.” from Boulder, CO. This is understandable – emerging brands with authentic roots earned their credibility, and associating themselves with large companies that derive a large portion of their income from HFCS sweetened products runs the risk of alienating some consumers. I do not say this to denigrate Coke or Pepsi; in fact, I applaud what they are doing – in a very big way. Through acquisitions and then expansions of healthier, emerging beverage brands like Honest, Zico, Izze, Naked, Odwalla and ONE, the large strategics bring healthier alternatives to mass market consumers. This is important and all good. And further, these acquisitions help fuel investment in additional emerging brands. It creates a virtuous cycle.

Why buy instead of build? Well, that’s a good question. Innovation is hard – for both large companies with vast resources and for small, independent companies. A recent IRI study showed that 85 percent of packaged goods that launch in the US today will no longer exist in two years’ time. I’ve actually heard even higher failure rates. Successful innovation – creating something new that consumers will try, come back to, tell their friends about and create enough (growing) demand to achieve scale – is very difficult. And the difficulty is there for both the scrappy (or free-spending) entrepreneur and the large CPG.

So if a young, emerging brand can achieve $5-10 million in trailing-twelve-month sales (Silverwood Partners’ starting point for consideration as a private placement client), something noteworthy has happened. Couple that size with limited distribution (meaning doing well in a small number of doors, thereby translating to strong distribution “white space” for an investor or buyer), strong gross margins, ever-increasing velocities off-the-shelf, a brand with permission to extend, leadership qualities in a growing category that is (or can be) large, something that fills a strategic portfolio hole for multiple potential buyers and nice ultimate synergistic fits, but the $5-10 million in sales mark will most likely only provide an emerging brand with the ability to garner venture capital or private equity money. In order to sell to a large strategic buyer, revenue usually must be much higher, typically above $40 million (some strategic buyers will want that number to be larger while others are fine with smaller-sized brands – every buyer is different). But the $5-10 million trailing twelve month revenue achievement can also garner strategic investment interest (more on this below) and get you off to the end-game race. Of course, not every business needs to be at least $40-50 million in size to sell; in fact, many smaller companies can still find good buyers as well, from the right-sized partner (think then-PE-backed Apple & Eve buying then-PE-backed The Switch). In fact, when private companies take in marquee private equity, another deadline arrises: the ticking clock to an exit. When TSG Consumer Partners (a large, consumer-focused PE fund) invested in Muscle Milk (CytoSport) in 2007, every large beverage company knew that roughly four to seven years later, Muscle Milk would trade. It was a foregone conclusion. Looking at the more prolific PE/VC-backed beverage brands out there today perhaps details the next wave of acquisitions: KeVita, Essentia Water, Spindrift, Zevia, Zola, Sunny D, Sambazon, Hint Water, RUNA, among others (see Table). 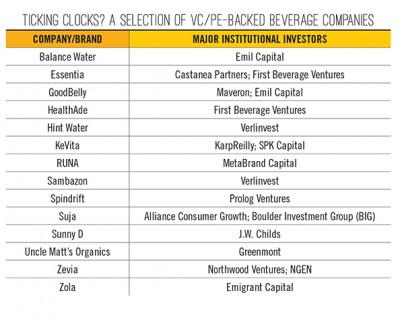 What Does this All Mean?

So, for the budding, growing beverage entrepreneur, what does all this talk about large strategics, emerging and changing beverage portfolios, paths to ownership and being private-equity-backed mean? In May 2007, Coca Cola announced 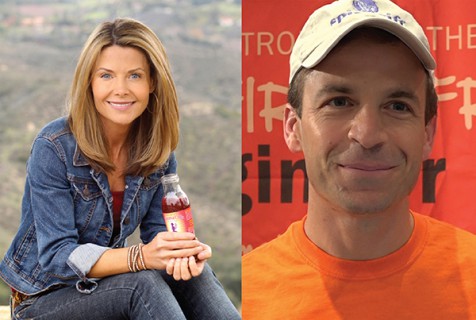 that it was going to buy Vitamin Water maker Glaceau for $4.1 billion. That’s a mega-mega deal (perhaps even a few “mega’s” short in there). Does Coke want to keep repeating that and do several more multi-billion dollar deals for emerging brands? No way. No buyer does. Hence, the “two-step” deal has emerged. In two-step deals, a large company will make an investment in a smaller, emerging, $5-20 million brand, add value (distribution, marketing, R&D support, etc.) and receive an option to buy the emerging company through a pre-determined formula at a pre-determined time in the future. The public face of this has been Coca Cola’s Venturing & Emerging Brands (VEB) group (they even have their own “VEB” brand and website) and they used this recipe to acquire Honest Tea and Zico. Pepsi utilized the two-step with ONE (an initial investment through Pepsi Bottling Group and then an acquisition by PepsiCo) and Nestle Waters did the two-step with Sweet Leaf/TradeWinds. Several large food and beverage companies across the US have adopted (or are looking into adopting) the VEB model and have put it to work – and often silently. As an investment bank under NDA with a good number of companies in the healthy food and beverage space, we know that many investments made by strategics over the past few years are just not publicly known. And that’s OK. Nothing matters anyway until an acquisition occurs.

For a sub-$40 million beverage company, a two-step has benefits (and risks). Focusing on the benefits, the smaller company retains independence, can continue to be nimble and make quick decisions while (hopefully) taking advantage of the positive elements that can come through the strategic partner. From the large company standpoint, there is an opportunity to get to know the smaller brand better and help nurture it along so that when it does achieve scale, it can be better integrated into the larger company’s infrastructure. Large strategic buyers, like Coke and Pepsi, are not designed to be successful running small brands. Their marketing and distribution models are intended for scale. It would be hard to imagine nimble entrepreneurs like Janie Hoffman (Mamma Chia) or Bill Creelman (Spindrift) as an employee of a large strategic doing there what they’ve accomplished to date with their brands if they had been constrained within the walls of a large strategic. To innovate the way entrepreneurs do, large strategics would have to invest large amounts of money creating a standardized brand-launch platform that could work for numerous new products in new sectors that would end up creating more failures than winners. This is not the way strategics work or are set up to work, and this approach would not be financially attractive. It is less risky to buy an emerging, fast-growth brand that has demonstrated an ability to gain traction with consumers and pay a premium. The failure risk is then borne by the market as a whole and not the particular large strategic. All of the development cost for the successful product (and the failed products) is avoided. What would otherwise be a development expense that is an (earnings depleting) operating cost now becomes substantially “goodwill” in the context of an acquisition and is reported on the balance sheet without ever passing through the income statement.

Despite the word takeaway not being a noun, let’s get to the crux. What matters here from Part I and II of these articles:

• Vitamin Water may be the “last” mega healthy beverage deal. The emergence of the two-step deals aims to make that so…

• Entrepreneurs need to create what strategics can’t on their own – science; functionality; proving new categories (like coconut water); in essence, they need to take the risks that the large BevCo’s will not, or cannot, (and then reap the benefits)

• Timing can be everything: Strategics are always looking to fill out their brand portfolios–emerging, private brands can help fill those voids, but if the emerging brands wait too long to sell or partner, they may miss their opportunity. For example, Pepsi has two coconut water brands now (ONE and Naked) – it’s hard to see Pepsi wanting a third…

• Exit opportunities abound: As discussed in depth in Part I of this series, entrepreneurs have options when it comes time to sell. There are large company buyers; small buyers; independent private company acquirers; and going public could be a viable option for a select few

So if you think you have the next Vitamin Water, Honest Tea, Sparkling Ice or VitaCoco, go for it. Know what you are building and what your end-game options look like and pay attention along the way. Your product and brand will likely morph and evolve over time – make sure the foundation allows for it.

Michael Burgmaier is a Managing Director with Silverwood Partners, an investment bank specializing on the healthy/active living and premium consumer space. 2013/14 announced beverage transactions for Silverwood include The Switch Beverage Co., KeVita, Essentia Water and Spindrift.