Most beverage distribution is relatively straightforward: a manufacturer sells a product to a distributor, which sells it to a retailer, which sells it to a consumer. It’s a much different dynamic when it comes to public schools, where distribution is governed by strict federal nutrition standards and overseen by a myriad of local gatekeepers operating municipal food service programs.

Kids’ drink manufacturers describe a particularly challenging process. With products formulated and packaged to appeal to young children, these companies are most often seeking distribution in elementary and middle schools, where nutrition guidelines for beverages are more stringent than those for high schools. Despite the difficult path to school distribution, upstart kids’ drink brands see value in school distribution as a means of creating awareness and building sales volume.

In 2010 President Barack Obama signed into law The Healthy, Hunger Free Kids Act, which was aimed at improving nutrition standards and reducing child obesity. The legislation authorized funding and set policy for U.S. Department of Agriculture’s (USDA) core child nutrition programs — the National School Lunch Program (NSLP) and the School Breakfast Program (SBP) — and established the most significant changes to the school lunch program in over 30 years.

The Act gave the USDA the authority to set science-based nutrition standards for all foods regularly sold in schools during the school day, including vending machines, “a la carte” lunch lines and at school stores. In 2014 the USDA issued its “Smart Snacks in School” directive, which set specific standards for all “competitive foods,” which are those sold outside of the NSLP and SBP and available for sale to students on the school campus during the school day.

On the beverage side, the Act allows schools to sell carbonated or uncarbonated water, unflavored low-fat milk, flavored or unflavored non-fat milk, milk alternatives as permitted by the NSLP and SBP, 100 percent fruit and vegetable juices, and full-strength juice diluted with water, carbonated or non-carbonated, with no added sweeteners.

States and local districts have the latitude to further restrict the sale of certain beverages, depending on formulation, package size and when they are made available to students. For example, Connecticut’s nutrition standards require that milk drinks be made with no artificial sweeteners and that juice beverages contain no more than 100 percent vitamin C. In Texas, soft drinks (defined as non-juice, carbonated beverages that contain natural or artificial sweeteners) may not be sold during the school day to any age or grade group.

ADDED FLAVOR NOT IN FAVOR

But the Smart Snacks in School directives, while conceived as a way to increase nutritious and low-sugar beverages options in schools, have become a point of contention for several drink brands that market zero-sugar, flavored water products and see themselves as right in the sweet spot for kids. 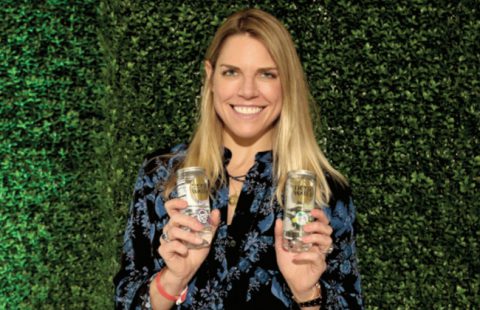 Despite its clean label, healthy halo and playful design, Tickle Water, a brand of premium, unsweetened, flavored sparkling waters developed for kids, has struggled to land placement in schools. Company founder and CEO Heather McDowell lamented that in many states and local districts, the sale of flavored water products, even those that contain no sweeteners, is prohibited in elementary and middle schools.

“We find it extremely challenging,” said McDowell. “I find it extremely disappointing that you could serve an apple juice with 27 grams of sugar, but you cannot serve a sparkling water that has a little bit of added carbonation and natural flavors.”

Rethink Water, which markets sustainably sourced water packaged in paper-based cartons, promotes its kids-focused line of USDA certified organic flavored waters as providing “a sugar-free alternative to juice for kids that… tastes great.” However, Rethink founder and CEO Matt Swanson said their relative lack of nutritional value has been a barrier to entry in schools.

“It’s zero-calorie, zero-sugar, [yet] there isn’t a ton of nutritional value outside of hydration, and we’ve gotten some pushback there,” Swanson said.

Gregg Lefkowitz, the co-founder of Wonder+Well, has faced similar resistance. Like Rethink Kids, Wonder+Well is a brand of water flavored with organic ingredients and contains no sweeteners or calories. Lefkowitz noted that New York City schools, in particular, have not been receptive to flavored water products, “because they don’t consider water to be a component of a meal.”

“They consider apple juice to be a fruit,” he said. “That’s kind of our debate with them, because apple juice is not the same as biting into an apple. There’s a lot that’s lost when apple juice is processed.”

The American Academy of Pediatricians (AAP), a professional association of pediatricians, has similar concerns about children’s consumption of juice. The AAP released a new policy statement in May which recommends that most children should be consuming less 100 percent juice products than previously advised. Among school-aged kids, the policy suggests a limit of 4 to 6 ounces per day for children ages four to six years; for kids between the ages of seven and 18, juice intake should be limited to 8 ounces, down from 12 ounces. The AAP cited high sugar content, along with a lack of protein and fiber, as potential detriments to excessive juice consumption in children.

Although Lefkowitz has engaged school officials in discussions on the amount of sugar and actual nutritional value of approved beverages like apple juice, he believes significant changes to the current system are unlikely to come in the near future.

Kevin Sherman, the president of True Drinks, which makes zero-calorie flavored water AquaBall, is a bit more optimistic. Sherman is actively speaking with school officials and food service operators on ways to incorporate more low- and zero-sugar drinks, including AquaBall, into schools.

“Excessive sugar continues to be a topic of concern amongst school administrators,” Sherman said. “Milk and juice still hold the corner market; however, the discussion is broadening and AquaBall has been involved in many of these discussions with key decision makers.”

Meanwhile, Bossi, a maker of organic, caffeine-free rooibos tea drinks for kids, is imploring schools to look beyond traditional beverages sold in schools. Bossi founders Paul and Celia Venter point to the functional attributes of rooibos, which is lauded as a nutrient-dense and antioxidant-rich ingredient.

“Our passion lies with schools and school nutrition,” said Paul Venter. “That’s where the concept of tea comes in really strongly, because tea comes with attributes that you really want to promote. That’s where somebody needs to step in and have a voice on that [subject].”

Despite a challenging road, early-stage brands have employed a variety of strategies and tactics to win placement in schools. Launched in May, Rethink Kids Waters, which are packaged in 8 oz. cartons and sold nationally at Target and CVS, are distributed in approximately 300 schools in the New York and Mid-Atlantic markets. Swanson credited a “tag-team” effort with Rethink’s wholesalers for school placement.

“All of the decisions are made at the local level, for the most part,” Swanson said. “It’s been a combination of partnership with our DSD distributors who have the relationships with the local school districts and also good old-fashioned rolling up your sleeves and pounding the pavement, which is what we’ve done as well.”

Amy Barnouw, the co-founder and CEO of Planet Fuel, a Connecticut-based brand of organic juice drinks, described school distribution as “a marathon, not a sprint.” Launched in 2016, Planet Fuel is formulated with a blend of juice and water. The certified USDA organic drinks contain 100 calories and 19-24 grams of sugar per 10 oz. can, depending on variety. They’re sold at retailers and schools in Rhode Island, Connecticut, New York and New Jersey, according to Barnouw, who noted that participation at local school nutrition association trade shows has been key to placement in schools.

“It’s where you get a lot of feedback and build those relationships,” she said. “We’re at the Connecticut trade show, and that [gives us] direct access to food service directors. And it’s Connecticut schools who love that we’re a Connecticut company and that we’re a healthier product.”

Planet Fuel also works with a number of distributors that focus exclusively on the school channel. Barnouw views school distributors as “not that different from a traditional broker.”

“You can’t just hire a salesperson to go out and tackle the school channel,” she said. “You have to figure a different way. Working with distributors who are willing to rep your product — they’re the ones that have those relationships.”

Although schools are a core part of Planet Fuel’s brand-building strategy, Barnouw believes that the opportunity for volume sales in schools is “unparalleled.”

“Right now, we’re looking at it for trial, marketing, exposure, brand awareness, all of those things,” she said. “But ultimately, it’s a channel of volume. If you’re really well-positioned in the school channel, it’s a great way to test new flavors. You get such an immediate response with kids. You’re going to know very quickly if it’s a product they like or not. Whereas it might take much longer in traditional grocery. They’re such fast consumption there, such consistent, high-volume consumption, it’s a great way for us to tap into that opportunity as well.”