“We were looking for new approaches to product development and Dunn’s River Brands can really bring the strategic resources on the human and capital resource side to really execute on those plans,” Sullivan told BevNET in April. “Their shared resource model really gives Temple that competitive advantage because we’ve got collective scales of multiple brands.”

Under the terms of the deal, Temple Turmeric founder Daniel Sullivan has stepped down as CEO but will remain with the company as Chief Innovation Officer.

Los Angeles-based startup 82 Labs, makers of the hangover detox shot Morning Recovery, closed an $8 million round of fundraising at a $33 million valuation in April.

The majority of the investment came from three venture capital firms with strong backgrounds in technology: R7 Partners, Slow Ventures, and California-based Altos Ventures, with the latter leading the round. 82 Labs founder Sisun Lee said the three firms contributed a total of $6.25 million.

Lee said the investment would be used to support research initiatives, help grow the company’s retail presence and boost marketing efforts ahead of this summer’s launch of the new version of Morning Recovery, which will feature new packaging and a new formulation that improves the efficacy of its unique natural ingredient.

The company has brought in $6.8 million in revenue and has generated over 40 percent in repeat purchase revenue since January. The product is sold primarily through ecommerce channels, and is in about 200 retailers nationwide.

“We are trying a lot of different things to increase the playbook of how we scale this thing across different cities, and what we learn that works we will replicate [in other locations],” Lee said. “A lot of the growth for this is going to be dependent on word of mouth, which has to be condensed in a small geography, so we start with big cities.”

Having filed multiple lawsuits over the past year against brands such as Health-Ade, Humm, and GT’s Living Foods, Tortilla Factory – the parent company of Kombucha Dog, which contains about 1.4 percent alcohol per 8 oz. serving – filed complaints against four kombucha brands in April, alleging that third party testing showed higher sugar and alcohol levels than labeled.

Trader Joe’s, The Bu, Better Booch and Rowdy Mermaid were named in separate complaints, filed in California by Kombucha Dog on April 9. According to the lawsuits, third party testing conducted within the last six months found that kombucha sold by each brand respectively had alcohol by volume (ABV) levels of 1.1-2.2 percent, 0.6-1.9 percent, 1.9-2.7 percent, and 1.00-1.2 percent. The legal limit required by U.S. law for a product to be considered non-alcoholic is 0.5 percent ABV.

“One of the reasons we’re doing this, and by we I mean [company founder] Michael Faye and Kombucha Dog, is to affect change in the industry,” said LevatoLaw attorney Stephen Weisskopf, who is representing Faye in all cases. “It needs change. It needs the bright light of sunshine to expose what’s going on.”

In addition to creating an unfair advantage in the marketplace, Weisskopf also stressed the public safety risk inaccurately-labeled levels of alcohol in kombucha can pose, particularly to children, pregnant women, and recovering alcoholics. 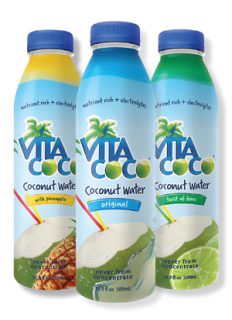 The bottles, which have a suggested retail price of $2.99, are an opportunity for Vita Coco to focus on developing its presence in C-stores, according to executive VP of global brand strategy and development Jane Prior. The convenience channel currently comprise about 23 percent of its total business.

The initiative will put Vita Coco into 90 percent of 7-Eleven stores nationally; the brand is currently available in approximately 60 percent of the retailer’s locations.

In addition to launching a PET package, Vita Coco is also preparing for the debut of a new line of sparkling coconut water next month exclusively at Kroger stores nationwide. The line will be available in 12 oz. aluminum cans in four flavors – grapefruit, lemon ginger, raspberry lime, and pineapple passionfruit. Each single-serving can will contain approximately 280 mg of potassium and no added sugar.

“It’s the sparkling experience that you love but also the benefits of coconut water,” she said. “Using coconut water, it has a naturally sweet, more robust flavor profile than sparkling waters.”