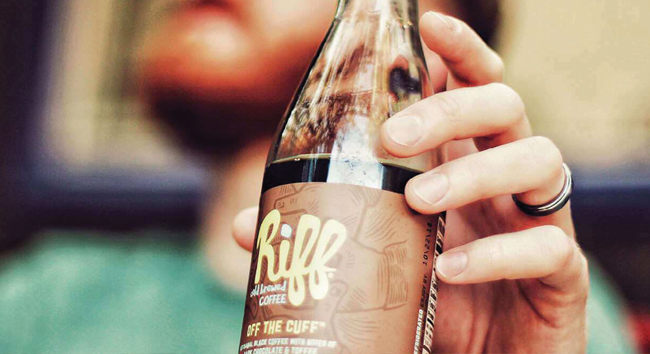 Bend, Ore.-based Riff Cold Brewed Coffee announced in October it has raised $1 million in an angel round of investment from a “who’s who” group of Oregon technology and consumer products executives.

The startup, which launched in April, asked each individual to donate $25,000 rather than seeking a lead investor for the round, president Steve Barham told BevNET. Barham, former senior director at LinkedIn, co-founded Riff with CEO Paul Evers, former Stumptown Coffee head of product development Nate Armbrust, and craft beer industry veterans Bobby Evers and Kevin Smyth. The company produces a line of bottled cold brew coffees as well as a multiserve bag-in-box and kegs for food service accounts.

“We have values and culture that is based on collaboration and community, so when we extended that to our fundraising efforts we wanted to create something that was grassroots, community-based, and really to take a tribal approach,” Barham said. “We wanted a group of backers of fans who believed in us as founders and believed in our mission in the cold brew coffee space.”

The round included investments from more than a dozen entrepreneurs and executives, including Hydroflask CEO Scott Allan, Smarsh founder and CEO Steve Marsh, Sightbox founder and CEO Travis Rush, and VTF Capital partner Will Young.

In October, National Beverage Corporation, maker of La Croix, found itself in the headlines for its fight against a class action lawsuit alleging that that the company uses synthetic ingredients in its sparkling water products, including one found in cockroach insecticide.

The suit, filed by attorneys from Beaumont Costales in Cook County, Ill. on behalf of lead plaintiff Lenora Rice and all those similarly injured, claims that National Beverage’s use of “all natural” and “100% natural” on its products is intentionally misleading to consumers because of the presence of synthetic chemical ingredients. According to a press release issued by the plaintiff’s attorneys, “testing reveals that LaCroix contains a number of artificial ingredients, including limonene, which can “cause kidney toxicity and tumors”; linalool propionate, “which is used to treat cancer”; and linalool, which is “used in cockroach insecticide.”

“Natural flavors in LaCroix are derived from the natural essence oils from the named fruit used in each of the flavors,” read the statement. “All essences contained in LaCroix are certified by our suppliers to be 100% natural.”

In a subsequent press release on Oct. 11, National Beverage announced the results of testing performed by a certified independent laboratory.

“A lab, accredited under the strict standards set by the International Standards Organization, tested vendor supplied ingredients to confirm they were derived from natural sources, such as fruit, instead of being artificially created in a lab,” stated the release. “The rigorous standards of the American Society for Testing and Materials conclusively proved that no trace of artificial or synthetic additives was found.”

One of a growing set of insurgent premium water brands was taken off the table in September when Keurig Dr Pepper (KDP) announced that it had agreed to buy CORE Nutrition, the maker of CORE Hydration and CORE Organics, for $525 million.

“KDP has been an outstanding partner for CORE and I am certain that, under its ownership, CORE will continue to see tremendous long-term success,” said founder Lance Collins in a press release. “I am a strong supporter of the KDP strategy and business model and am looking forward to being a shareholder in the company.”

The deal comes amid a reshuffling of the allied, independent brands distributed by Dr Pepper Snapple Group, which was taken over by Keurig earlier this year. Pressure increased on KDP to buy CORE when Fiji, another premium water company in the allied brand portfolio, cut ties with KDP from a distribution standpoint. Another allied brand, BodyArmor, is also leaving the fold, having agreed to a minority investment from the Coca-Cola Co. in August. The company purchased Bai in 2016 and owns a stake in High Brew coffee as well. Vita Coco remains independent but is widely distributed by KDP. Later in the month, KDP announced a distribution deal with Evian to fill the import slot in its portfolio.

Delgado-Jenkins told BevNET that in Outlaw he saw an opportunity to disrupt the energy drink category. The brand, co-founded in 2014 by former Kraft Foods VP Doug Weekes and Fuze/CORE Nutrition/BodyArmor founder Lance Collins, had begun working on a rebrand and reformulation when Delgado-Jenkins was chosen to take over the CEO position from Weekes, who remains with the company as COO, and help guide the new product development.

“With Outlaw, it launched a couple years ago and [Weekes and Collins] felt like it needed a small relaunch,” said Delgado-Jenkins. “So they asked me to work with them and I came on board, worked with the team, and we’ve now reformulated the product and we’re going to be launching in Q1. So I was looking for a growing category where I could improve the product, disrupt the category, and play a significant role in continuing to propel its growth. That’s what I was looking for and I found that in Outlaw.”

Coming from 7-Eleven where he played a critical role in selecting and building brands from the retail side, Delgado-Jenkins said he plans to bring that perspective to the brand side and “simplify the process” for buyers. He said he plans to take measures to ensure Outlaw Energy is always “100 percent in stock” with high fill rates, lining up planning processes with retailer’s planning processes, finding ways to cut costs to provide consumers with better value, and better communicating with retailers how they’re speaking to consumers and specifically working to drive traffic to stores.

Keurig Dr Pepper (KDP) will eliminate 500 jobs nationwide by Jan. 4, 2019, including 118 jobs across four facilities in Vermont, as the company consolidates operations following its merger this summer.

Katie Gilroy, Director of Corporate Communications at KDP, said the 500 cuts, most of which have already taken effect, affect employees “primarily in salaried positions across multiple functions and geographies.”

“This was a key step of bringing our two companies together,” Gilroy said. “This was not targeted at one individual company over another. As you can imagine, with a merger of this size, there is a duplication of roles, so in part, this is a rationalization of that. It’s also about us optimizing our organizational structure for speed, growth and efficiency.”

The cuts in Vermont affect KDP’s four facilities in the state in the cities of Waterbury, South Burlington, Essex and Williston. Eighty-two of the jobs eliminated will be at KDP’s Waterbury manufacturing location, which housed the company’s “test and learn” lab for product development. Those operations will be phased out over the next several months, and some employees will continue reporting to work through Jan. 4, 2019. The Waterbury facility will remain open, as will the other three locations in Vermont.

Gilroy said R&D operations will be decentralized from the Waterbury facility and integrated on-site into KDP’s manufacturing plants in Tennessee, Washington, Virginia and in Canada.

“We’ve determined that it’s more effective to locate those testing capabilities within the production facilities where process improvements are being implemented,” she said.