WHEN GRADY LAIRD BOTTLED HIS FIRST OFFICIAL BATCH OF cold brew coffee in 2011, it was a niche enterprise with a unique, craft aesthetic. Only a relative handful of brands on the market were producing the alternative coffee format, and Laird took an eagle-eyed approach to ensuring the brand that would bear his name – Grady’s Cold Brew – stood up to his own quality assurance taste test. 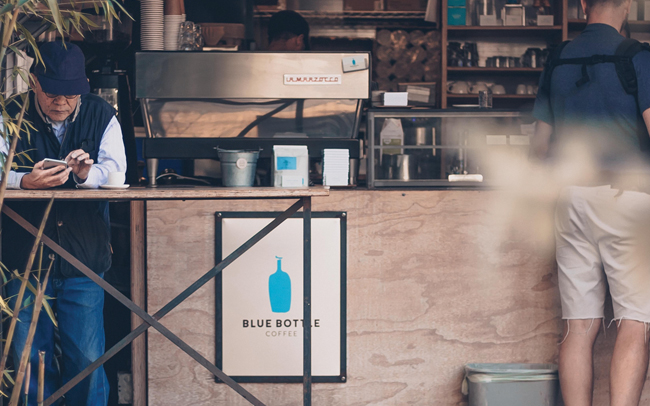 “When we started you had to explain that it wasn’t beer, there was a ton of consumer education on cold brew,” Laird told BevNET.

But much has changed in the nearly seven years since Grady’s hit store shelves in New York. Cold brew today is one of the top trends in beverage, the term is becoming increasingly familiar to consumers, other categories like tea are beginning to experiment with the process, and the innovation pipeline for the coffee market as a whole seems to be primarily geared towards building on the concept. Now, as an influx of innovation comes from startups looking to get in on the new movement in coffee, the major players in the beverage industry are also now seeking a stake in the game – and they have the resources to quickly dominate the field.

That isn’t putting off the young CEOs of these early stage coffee brands, however: ask them how they feel about the big competition, you’ll likely hear a common refrain: A rising tide lifts all ships.

Last year in particular was a pivotal moment for this coffee subcategory, and for some brands that have been trading in cold brew since the turn of the decade, the tide is finally carrying them to success. Mainstream coffee competitors have moved to increase their share of the market via product launches and brand acquisitions, and the investments and the buyouts are starting to happen. In the fall of 2017, Nestlé took a stake in third wave coffee cafe chain Blue Bottle Coffee and soon after made a full acquisition of seven-year old Chameleon Cold-Brew.

Peet’s Coffee, a subsidiary of European conglomerate JAB Holdings Company, launched not only a line of cold brew coffees but also Coldcraft, its own chilled direct store distribution (DSD) network.

And Starbucks, which controls the largest share of the ready-to-drink coffee market with its iced coffee and latte products, has continued to grow its cold brew offerings both in retail and on premise. The company now offers cold brew in all of its cafes nationwide, with nitro cold brew available on draft in about 1,500 of those stores. In January, the company partnered with Joyride Coffee Distributors to deliver its cold brew on tap in major East and West Coast markets.

PepsiCo has partnered with Starbucks, Dr Pepper Snapple (DPS) is a distributor for canned cold brew brand High Brew (and potentially several others, now that it’s been merged with Peet’s JAB Holdings stablemate, Keurig), WhiteWave has made big gains in grocery with STOK, and The Coca-Cola Company has signed a deal with Dunkin’ Donuts – a company currently seeking to find its own footing in the cold brew trend.

“Cold brew coffee is not a fad,” Joyride CEO David Belanich told CNBC after the announcement of the Starbucks partnership. “And Starbucks is actually forward looking enough to see that and seize on it in a big way without compromising their quality and standards.”

Standards are a big issue, to be sure, and the “craft” side of the cold brew space doesn’t want to see it commoditized.

Much like craft beer before it, a seemingly endless wave of startups is also appearing across the country. For independent brands like Grady’s, there is concern the movement may be hurting the integrity of the cold brew name.

“It’s a really hot category, and I think in a rush to monetize it I think a lot of the people who produce cold brew have forgotten, or maybe they never even cared, why they got into it,” Laird said. “I got into cold brew because it was a better tasting, less expensive, and more convenient way to drink quality iced coffee than having to go to the coffee shop. And I don’t know if you can say that about a lot of the products that are on the shelf right now.”

But according to Rabobank senior analyst Jim Watson, cold brew is still in the first inning of the ballgame. RTD coffee is a roughly $3 billion category, he told BevNET, and cold brew is barely a fraction of that market share today, with retailers only now beginning to expand the shelf space they offer the category. Indeed, cold brew is the most important innovation to come to the space in recent memory, he added, and the fact that major players are trying to consolidate their share of the market is a promising sight.

As consumer attitudes toward coffee consumption occasions shift with cold brew, the category could one day pose a serious threat to soda and energy drinks as the go-to pick-me-up beverage, Watson said. The presence of larger brands is likely to open more doors than it closes for startups.

“I would still be very happy if I were a startup and I thought Nestlé were going to make a bigger push into this,” Watson said. “The more money and marketing you have behind this, the more you have big companies pushing retailers to open up new coolers to this segment, which is much better to everybody.”

David Smith, founder of High Brew Coffee, told BevNET he felt that the entry of companies like Starbucks and Nestlé has had a validating effect on the space. For High Brew, which has differentiated from other cold brews via its slim cans, emphasis on energy, and slightly lower price point, distributor depletion numbers are up more than 130 percent year over year, Smith said. But even with strong sales, the influx of brands and innovation poses a challenge.

In High Brew’s case, its alliance with DPS in 2016, when the company was still fairly new, presented an opportunity for rapid growth that gave it clear edge over other early stage cold brew brands, particularly in the convenience channel. Many cold brews enter the market via the natural and specialty channels, and Smith said he wasn’t sure that mainstream c-stores are a viable strategy for most new companies without the strong arm of a major distributor. That’s not to forget the capital that Smith has garnered via investment from firms like CAVU and Boulder Investment Group Reprise to provide the resources to scale. 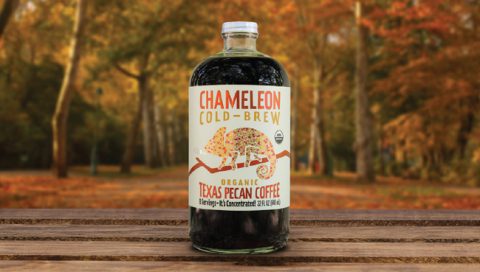 At the time of its acquisition by Nestlé, Chameleon had grown its distribution outside of specialty as a premium organic brand in the drug and grocery channels. While a craft-focused founder such as Grady Laird said he worries about low quality trend-followers posing a threat to cold brew’s perception by consumers, Chameleon founder and CEO Chris Campbell said he sees the space becoming a place for brands to compete and find their own niche.

“Everyone needs to decide where they live,” Campbell said. “You can live at low price, low quality, or high price, high quality, there’s a big mix and that shakeup is going to happen over the course of 2018. Everyone is going to carve out their spot. It’s a big space, but it’s not an infinitely big space. And so we’re all going to battle with each other a little bit for the hearts and minds of the consumers, and we’ll see who has loyalty and who doesn’t over time.”

In his Darwinian approach to the category, Campbell said he believes big strategic corporations are getting into cold brew now not just as a way of following trends, but because the time is also opportune to make a cheaper entry. With veteran and incoming cold brew brands set to fight for survival, the independent brands that “make it” and last the next three to four years have found a strong point of differentiation and will likely fetch a higher asking price for an acquisition, he said.

As far as a rising tide goes, Campbell thinks the category is maturing, and the ship for a national brand may have already sailed.

“I think this may be a great time to maybe do a regional play, and try to build a company that gets to profitability and is operable over the long haul, kind of win hearts and minds locally, but to build a national brand in cold brew right now, I think would be challenging,” he said. “You’ve got to have a brand that’s really interesting. You need to go into a buyer who’s already got three, five different brands on the shelf, and say ‘you need this new brand that has no performance data behind it.’ That’s a really hard sell.” 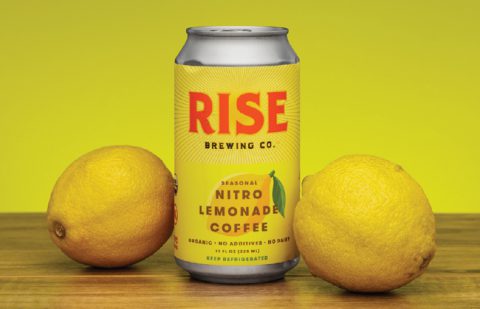 The founding team of Rise Brewing Co. believes it has found the point of differentiation it needs to win nationwide. Since launching in late 2016, the New York-based company has expanded throughout the Northeast and in January began selling in the Pacific Northwest and Alaska, with plans to enter the Mid-Atlantic region later this year.

Seeking a signature point of differentiation, Rise has attached itself to nitro cold brew, deploying a Guinness-like widget for its cans to ensure a proper release when the can is opened. As its retail placements have grown, the company has released citrus-flavored SKUs such as Blood Orange and Lemonade nitro coffees, and placed a big emphasis on its keg business, distributing via Joyride Coffee Distributors and finding alternative routes to market such as beer distributors.

“What makes small companies different is to be able to be agile, try out new methods of sampling and relating to the consumer,” said co-founder Jarrett McGovern. “For us it was doing a lot of beer trade shows and we actually picked up a lot of keg accounts. But we were the only coffee company that was there. For the big guys, they don’t look at the nontraditional markets to take on the distributors.”

McGovern is a subscriber to the rising tide philosophy, noting he sees big brands doing the “missionary work” for cold brew and paving the path for innovative startups to succeed.

The cold brew space is also rich for experimentation. The unusual combination of coffee with citrus flavors has opened doors for brands such as Rise, Matchless Coffee Soda, and Upruit to differentiate out the gate. While still unproven, this particular innovation trend has caught the eye of larger brands such as Stumptown and Chameleon, both of whom unveiled sparkling cold brew lines with citrus flavors last year.

And so the innovation push continues. In addition to citrus, Rise is also exploring dairy alternative lattes as another innovative trend, following in the footsteps of Califia Farms’ prolific almond milk latte portfolio.

“I hear somewhat often that the cold brew coffee shelf is crowded,” said Rise CEO and co-founder Grant Gyesky. “They’ll walk into a Whole Foods and say there’s already six coffees on the shelf. My answer to that is to say, when you walk over to the beer section how many beers are there?”