With the departure and date for a move to Philadelphia set for 2020, natural product brands and manufacturers from across the industry converged at the Baltimore Convention Center in Baltimore on Sept. 13-15 for the annual Natural Products Expo East trade show. As in previous iterations, this year’s event featured a wide array of new products, line extensions, package redesigns and bleeding-edge trends.

Ready-to-drink teas were among the most prominent category at this year’s Expo East show, as brands showed a desire to innovate and broaden their respective product offerings. Boulder, Colo.-based MindFull Inc. showcased its partnership with premium yoga apparel and equipment maker Gaiam for a branded four-SKU line of lightly sweetened (2g sugar) organic green teas. However, the company will look to develop its own brands, such as Vibe, a organic black tea available in pomegranate and mint flavors that will launch in November. Both items are packaged in 16.9 oz. Tetra Pak cartons, the same used by Toronto-based Flow Alkaline Spring Water, which provides the naturally electrolyte and mineral-rich spring water used in both Gaiam and Vibe.

Bubbles were on the brain for several tea brands at Expo East 2018. Cham Cold Brew Wellness Tea featured samples of its new three-SKU line of sparkling teas in 12 oz. slim cans, which maintain the function-forward positioning of its still products with varieties like Revive, Defense and Serenity. Meanwhile, having already established its credentials as a carbonated drink, Sound Sparkling Tea is pushing deeper into the space with the forthcoming launch of a “tea-infused” sparkling water line. Set to debut exclusively as a direct-to-consumer item this fall, the complete four-SKU line, made with fruit extract and tea botanicals, includes two caffeinated and two non-caffeinated varieties. The formulation echoed the approach of Chicago-based Seasons Sparkling (formerly Seasons Soda), which shared samples of its lightly sweetened sparkling tonics made with tea extracts. 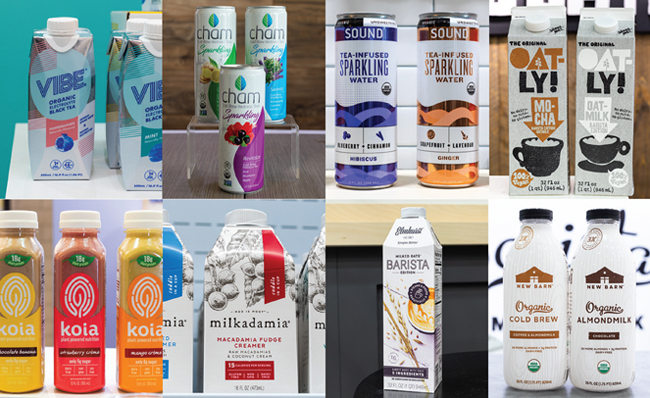 Meanwhile, the momentum behind dairy-free and plant-based smoothies, milk and coffee products seemed to be picking up steam. Plant-based protein drink maker Koia exemplified this trend through its new three-SKU brand extension, called Fruit Infusions. Speaking with BevNET at the company’s booth, CEO Chris Hunter said the new line, available in Chocolate Banana, Strawberry Creme and Mango Creme flavors, represents a deliberate shift towards the taste preferences of conventional grocery consumers who are familiar with fruit-centric products from Naked and Odwalla.

Coffee has been one of the primary beneficiaries of the movement towards non-dairy milk alternatives, and vice-versa. Specifically, oat milk has emerged as the non-dairy milk currently in favor with baristas at espresso bars, thanks in large part to the prodigious rise of Swedish brand Oatly. The brand shared samples of Mocha Barista Edition, available in 32 oz. cartons, at the show. Underscoring oat milk’s current coffee-fueled momentum, Elmhurst 1925 showcased its own “Barista Edition” milked oats product (also available in milked brown rice and milked almonds) in 32 oz. cartons. Organic almond milk brand New Barn, which also has its own barista-specific offering, shared a look at its first coffee-based SKU, a combination of organic cold brew and almond milk. Elsewhere, Rise Brewing Co. took home a NEXTY Award for Best New Organic Beverage for its new nitro-infused, oat milk-based line of cold lattes.

Austin, Texas-based Chameleon Cold-Brew was also present with its new line of frothy Cold-Brew Lattes that looks to extend its reach within the category with its first shelf-stable line. The products are made with organic whole milk and utilize a proprietary brewing method to give the canned coffees a foamy top and thick texture. Cold-Brew Lattes will launch in stores in Q1 2019 in Original, Pecan, and Mexican varieties for a suggested retail price of $2.99 per 6.2 oz can. 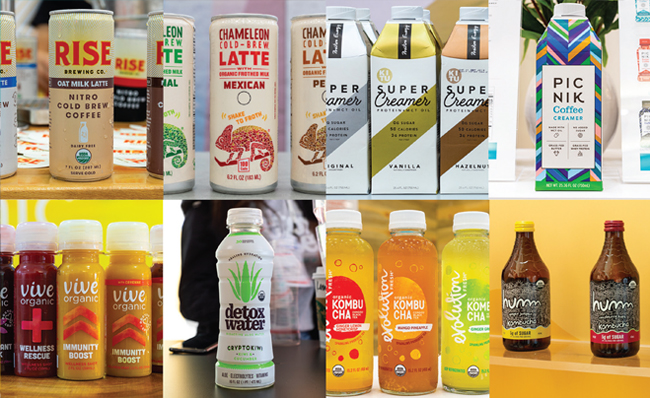 Finally, while shots remain a relatively small portion of the complete beverage landscape, a variety of shot makers that exhibited at Expo East are attempting to prove that the format is in an ideal position. Cold-pressed juice brand Vive Organic debuted a pair of new additions to its Immunity Boost lineup, one with cayenne pepper and the other featuring elderberry. While Vive has worked exclusively in the 2 oz. shot space, other brands are moving into the format for the first time. Samples weren’t available, but Detoxwater showcased Veralixir, a highly concentrated version of the brand’s bioactive aloe vera formula. Founder Kenneth Park told BevNET the product aims to serve the same functional benefits as the core line – digestive health, skin elasticity and immunity – but in a more convenient format.

Kombucha has been one of the great natural retailer beverage success stories in the past decade, but the category didn’t feel as big a part of this year’s Expo East as in prior editions. The most significant new entrant was Evolution Fresh, which shared samples of its new six-SKU line of organic kombucha. Oregon-based kombucha brewer Humm, which announced in August it had developed a proprietary fermentation process that ensures its products never reaches over 0.5 percent alcohol by volume (ABV), was also on hand with samples of its reduced sugar (5g per 8 oz. serving) SKUs and a new 40 oz. multiserve bottle.