Bang – the Florida-based fitness energy brand produced by VPX Sports – emerged on the scanner for the first time, sporting a gaudy 914.7% growth for the four week period, reporting $178 million in sales for the year-to-date. Four months later, this past March, the brand was still rising by triple digits, reporting blazing 748.3% growth for that four-week period and $345 million in year-to-date sales.

But the curious new entry wasn’t just in Nielsen, it was in stores too, with retailers rushing to place reorders in order to meet the sudden demand.

“I have not witnessed a product movement like Bang in the past decade,” one retailer was quoted by Wells Fargo Securities. “We bring case stacks in at a time and it almost seems to vanish. Managers are calling almost daily to increase their flavor assortment.”

For a brand that launched in 2012, Bang’s emergence as a serious competitor to established energy category leaders has felt like a seven-year overnight success, but the conversation around the space has shifted dramatically in the short period since. In Wells Fargo’s first quarter ‘Beverage Buzz’ survey, released in April, convenience retailers reported that sales of category leader Monster were in decline, while 90% of respondents said they currently carry or plan to carry Bang as demand skyrockets.

Bang’s slow-then-sudden rise, however, makes sense within the context of a broader, years-long food and beverage trend toward fitness and better-for-you products. Though the brand’s success is remarkable, it’s one of many emerging fitness energy drink brands that include Celsius, C4, Kill Cliff, LifeAID, EBOOST, and recent entrants including Monster’s Reign line and the Keurig Dr Pepper-backed Adrenaline Shoc.

While the broader energy category is experiencing muted growth expectations, these performance focused brands – varyingly formulated to feature healthier ingredients for a pre-workout amp up such as branched-chain amino acids (BCAAs) and L-Citrulline, along with high caffeine content and low sugar – are attracting new and more diverse consumers to the category, and potentially laying the groundwork for a new wave of energy drinks.

Speaking with BevNET, Peter Strahm, founder and CEO of New Jersey distributor Drink King, said Bang’s rapid growth came after a number of recent decisions made by VPX Sports, including a can redesign and a large social media campaign that launched last year. Drink King only started distributing the brand in November – right as the expansion began – and Strahm, a former vice president and general manager at Red Bull during its U.S. rollout, said the brand’s combination of flavor, functionality, and “coolness factor” reminded him of that company’s early days.

Like Red Bull, Strahm said, Bang’s focus has been on “up and down the street” independent accounts. For Drink King at least, independents makes up three-quarters to 80% of its Bang customers, while VPX Sports itself has focused on building a strong nationwide DSD network. While there are still major grocery and chain c-store accounts the brand has not yet tapped, Strahm said the large accounts it is in are frequently reordering.

“We had one of our Walmart store managers build a display for themselves because our product came and our merchandiser was a half an hour behind them and they didn’t want to wait,” Strahm said. “Think about that! I’ve never had a manager of a Walmart do the job themselves, it just doesn’t happen.”

Currently, Strahm said, Bang’s marketing has been limited to social media and in-store displays. There’s “really no other push,” he said, citing a lack of events, sampling, and point-of-sale placements.

“This is really all happening off of the strength of the brand, which to me is a huge, huge indicator of what fuels future success,” he said. “All of those other things, that’s window dressing now. But you’re going to add extra media points to this, you’re going to add point-of-sale and coolers will be out there. All of that stuff is going to make its way into the system over the next year and it’s just going to enhance it more.”

In an email to BevNET, Bang CEO Jack Owoc said the company is anticipating it will continue growing at a rapid clip, noting that earlier this year the brand saw its first single day sales of over $5 million – a touchstone that is now used as a minimum daily benchmark. The company has now constructed a 250,000 square foot warehouse, which is the first of three planned buildings which will total 1 million square feet between them. VPX is also installing seven new 2,000-cans-per-minute production lines, three of which will be operational by the fourth quarter. Owoc added that the expansion comes as the company is seeking to maintain tighter control over its production, calling Bang “far too scientifically advanced for most third party facilities.”

But alongside the hype over the brand’s growth, Bang has also been mired in multiple lawsuits with its chief competitor, Monster. In September, Monster filed a false advertising complaint against Bang, with attorneys accusing it of being “modern day snake oil” and citing alleged claims that the product could treat chronic illnesses. In March, VPX Sports hit Monster with a suit of their own, accusing Monster of trade dress infringement over the design of their competing fitness energy brand Reign, which VPX believes hews too close to Bang’s vibrant color design.

Bang’s CEO Jack Owoc has also not shied away from making the rivalry a public affair and using the controversy to promote the brand by painting competitors as being afraid of Bang’s organic popularity. In an April 24 post on his LinkedIn account, Owoc wrote that Bang’s growth rate “has the competition freaking out and going into a tailspin.” He welcomed the legal attacks, adding that “not only are we not afraid, our legal counterattack against Monster will be unrelenting.”

Monster announced it would enter the fitness energy space with Reign in February. CEO Rodney Sacks said in the company’s fourth quarter and full year earnings report that the line would be a standalone product, and not a line extension for the core Monster brand, adding that it would enable the company to “position the brands differently and get more shelf space.” While Wells Fargo Securities analyst Bonnie Herzog has several times questioned whether the line could be “too little too late” for Monster, the line has helped lift the company’s sales since launch, with ACV at 27% in all channels and 69% in c-stores as of April 20.

According to Wells Fargo, a September analysis of the fitness energy subcategory showed that among convenience consumers 28% were shifting from one brand to another, while 18% were new to the category and 54% were existing consumers increasing their spend. 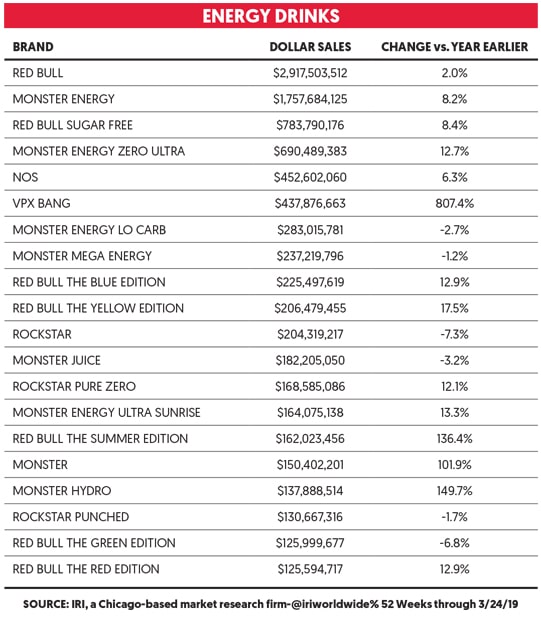 Though Bang may be grabbing the headlines, existing brands are feeling the lift as well. Last year, sports nutrition company Nutrabolt launched a sparkling RTD version of its eight-year-old pre-workout powder brand C4 in 16 oz. cans. Speaking to BevNET, Declan Duggan, VP of Beverage East for the company, said that because the brand has long been established in the fitness channel sales of the RTD line have sharply risen in the past few months. In March, the line shipped nearly $2.4 million and Nutrabolt has quickly put its weight behind supporting its beverage division.

C4, which has wide distribution in the fitness channel in accounts like GNC and Vitamin Shoppe, is now in the process of establishing a distribution network to service conventional retail and convenience. In New York the brand has replaced Monster in Big Geyser, on the West Coast it has signed with Haralambos, DPI Specialty Foods, and Valleywide. In Colorado the brand is carried by New Age and in Texas it is serviced by Kimball Distributing.

The RTD space has also allowed C4 to expand its consumer base beyond the fitness consumer, Duggan said, noting the brand does not want to “pigeon hole” itself.

“We want to cast a wider net,” he said. “Our cans don’t say ‘pre-workout,’ they say ‘energy to perform.’ Workouts come in all formats and personally speaking, I’ve been at convenience stores early morning and watched manual laborers, roofers, landscapers all come through and they get a large bottle of water and pick up two energy drinks on their way out the door. If we have something that helps with muscular endurance, cognitive ability and just general performance as well as having some caffeine in it that’s something that type of person needs.”

EBOOST, which has marketed a powdered pre-workout product for about 10 years, also recently made the entrance into RTD. CEO Josh Taekman told BevNET that the brand’s “cult following” in the New York market has allowed the brand to go deep with a “zip code by zip code” strategy within the metro area.

“We were really not trying to steal share from Red Bull and Monster,” Taekman said. “Without data, the feeling was that the people who drink it are going to continue to drink it because that’s what they grew up on. But it’s this new generation of kids who aren’t starting there, but they’re starting in the bullseye of functional beverage categories whether that’s a matcha or a coffee or caffeinated tea. But what we’re finding is that when we’re demoing it out to people who drink Red Bull or drink Monster they’re loving the taste, they’re loving the key ingredients.” 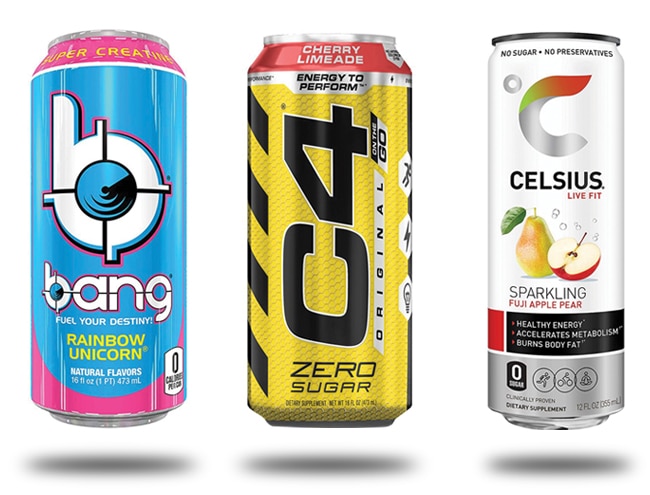 Launched in 2005, Celsius has had a slow journey to nationwide prominence that is now taking off with a rush of new distribution opportunities and retail expansions. Speaking to BevNET, CEO John Fieldly – who first joined the company as CFO in 2012 – said although traditionally the bulk of energy drink sales have come from the convenience channel, Celsius has exceeded buyers’ expectations with its multi-channel strategy spanning mass to drug. Since last year the brand has received chainwide expansions in retailers in multiple channels including Target, 7-Eleven, Dick’s Sporting Goods, CVS, and Rite Aid.

“These retailers all started testing this category back in 2018,” Fieldly said. “CVS gave us a 500 store test back in 2018, now we’ve rolled out chainwide for 2019. It was the same thing in Rite Aid, a test in Rite Aid with a few cans in every store, now they’re rolling us out to all stores with better-for-you GNC coolers.”

Fieldly credited Bang’s rise as helping lift the category, noting the brand’s success “gives additional credibility” and is complementary to brands like Celsius. Celsius is currently building out a nationwide DSD network which includes distributors for Anheuser-Busch InBev, PepsiCo, and Keurig Dr Pepper – an opportunity that arose after Bang set the tone for growth in the energy space.

However, Celsius doesn’t view Bang as a direct competitor. While Bang has stayed within the traditional energy marketing realm by targeting younger males, Celsius EVP of Marketing Matt Kahn said the company has managed to expand the category by breaking away from male-focused advertising and generating a 50/50 male-female split among their base through marketing campaigns that emphasize fitness and inclusivity. While the brand built recognition with celebrity influencers like rapper Flo Rida and actor Mario Lopez, its strategy has shifted toward “micro influencers” with 15,000-100,000 online followers and entrenched credibility in fitness circles.

“It’s not meant to be a diss against some of the older established players, but dirt bike riding, bungee jumping, things of that nature are becoming a little passe,” Kahn said. “Most people want to see marketing and see brands they can really identify with.”