In kombucha, the story of the 2010s has been about the category’s rise from a niche beverage to a mainstream product. Having achieved that milestone, the question facing the industry at the precipice of a new decade is how to ensure that growth continues.

Even before turning the page to 2020, there are already reasons for some concern: According to market research group SPINS, category dollar sales have slowed even as kombucha continues to climb closer to becoming a $1 billion market. After growing 39% across all retail channels in 2017, the category expanded by just 22% over the course of 2018, including a notable drop — from 22% to 5% — in the natural channel, traditionally kombucha’s strongest retail base. Distribution gains are still happening at a brisk pace with double-digit gains across channels, but velocities have declined, with natural (-14.1%) and convenience (-10.1%) taking the biggest hits. In MULO and specialty gourmet channels, velocity was down 9.8% and 6.9% respectively.

According to Bobbi Leahy, director of sales at SPINS, the combination of declining velocities and increased distribution is pushing the retailers towards the limits of their category set sizes; as such, a “reckoning” for a number of kombucha brands may soon be inevitable. Once buyers take a closer look at what flavors and formats are working at their respective stores, underperforming brands will likely face the chopping block.

With that in mind, the impetus to innovate is perhaps stronger than ever. By adding functional ingredients, reducing sugar and introducing shelf-stable products, kombucha brands from across the industry are betting that moving aggressively with on-trend releases can bolster their prospects of standing out in an increasingly saturated market, while also staying true to kombucha’s valued traditions. It’s a difficult line to walk, but one that may prove crucial to the category’s long-term health.

Depending on who you ask, kombucha has always been a functional drink. Like other fermented beverages, it has long been associated with supporting healthy digestion and gut function, thanks to the presence of acetic acids and probiotics. Yet, as seen in other categories, consumer interest in functional benefits and ingredients is beginning to influence how companies in the space consider building their respective brands.

Within that context, energy is a natural place for kombucha to go next. Aiming to stake an early claim in functional kombucha, Brew Dr. this fall launched Uplift, which the company has marketed as “the first caffeinated kombucha.” Made with Yerba mate and guayusa, Uplift contains 130 mg of caffeine per 12 oz. bottle. According to Brew Dr. founder and CEO Matt Thomas, using those two naturally caffeinated botanicals fits with the company’s heritage as a tea-focused brand.

“Where we have a goal for a product, or where we know we can get the best flavor from something that’s not in-line with the tea approach, we are willing to flex our expertise into new areas,” he said.

Uplift also has a clear commercial objective: help Brew Dr. expand its presence in convenience stores. Thomas said the product, now available in 14 oz. glass bottles, will be introduced in 16 oz. cans in Q1 of 2020.

CBD, similarly to kombucha, is enjoying a recent surge in mainstream interest after a long history of use by homeopaths and natural medicine enthusiasts. With that in mind, could kombucha be an ideal vehicle to bridge the knowledge gap with new consumers and communicate CBD’s unique benefits and uses? Some brands are hoping that’s the case. Last year, GT’s Kombucha introduced Cannabliss, a draft-only addition to its Enlightened line which contains 10 mg of CBD per 16 oz. serving. Meanwhile, a handful of small-batch brewers across the country — including Wild Kombucha, Nessalla and Booch — have all introduced CBD-infused varieties over the last year.

Jeff Weaber, CEO and founder of Vermont-based Aqua ViTea, believes that kombucha has a natural advantage over other beverages when it comes to CBD. This year saw the brand launch two varieties of CBD-infused kombucha: Green Tea and Chaga Chai, the latter of which is brewed with chaga mushrooms. Each contain 25 mg of CBD per 16 oz. serving and is available exclusively at retailers in New England.

“If you add CBD to sparkling water, you have sparkling CBD water. There’s no craft in that,” he said. “Is water really the stage to be building functional beverages from? Kombucha, which is already part of that health and wellness mindset, seems to me like a better place to add the functionality of CBD.”

Weaber acknowledged that this approach may have its limits, as well.

“I think it’s just deepening the connection we already have with kombucha consumers,” he said. “I don’t think people are going to slide into kombucha because of CBD, but it adds value for those who are already on board with kombucha.”

Amidst all the buzz around various diets and healthy lifestyle trends today, there’s one thing that everyone can agree on: the less sugar a product has, the better.

Yet for kombucha, there are clearly defined limits to how much sugar can be reduced; as an essential ingredient in the brewing process, it can’t be completely removed or substituted. As a live beverage, listed sugar content can change while products sit on the shelf, which itself has led to lawsuits targeting some of the category’s biggest brands. The challenge of bringing in new kombucha consumers, particularly those looking for a better-for-you alternative to carbonated soft drinks, with appealing low-sugar flavors adds a further wrinkle to the proposition. The question brands looking to cut sugar must answer is, simply, how and how much?

Looking across the category will provide different answers. Oregon-based Humm Kombucha — which introduced two new reduced-sugar flavors, Raspberry Hops and Ginger Juniper in 2018, each containing 5 grams of sugar and 25 calories per 8 oz. serving — closed the sweetness gap by pivoting from using sweeter fruits to tart and spicy ingredients like ginger and raspberry. While those products feature callouts to “reduced sugar” on the package, other brands have also sought to create SKUs that come in at around 5 grams of sugar per 8 oz. serving, including Health-Ade (Ginger Lemon) and Brew Dr. Kombucha (Clear Mind). 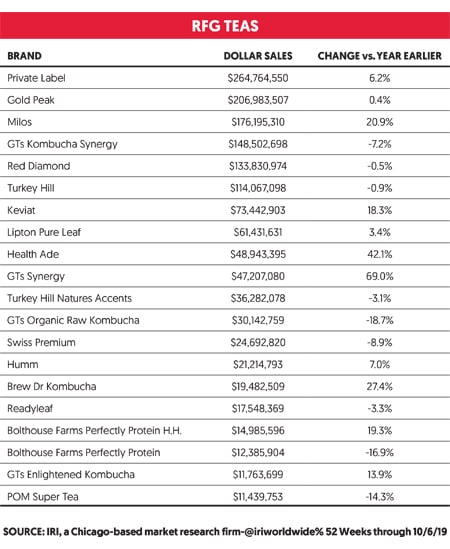 Cutting sugar was also a key decision for Revive, the Northern California-based kombucha brand in which Peet’s Coffee is majority stakeholder. This year the company introduced a line of sparkling kombucha in cans, each with 5 grams of sugar per 12 oz. serving. More importantly, unlike Revive’s original line, the product is shelf-stable, granting it access to distribution via Keurig Dr Pepper’s ambient DSD network. Beyond simply counting grams of sugar, shelf-stable kombucha presents the question: is making the move away from exclusively cold-chain products a valid way in which the category can gain new consumers, or will kombucha’s identity and authenticity be lost in the process?

There’s reason to suggest that the former could be true. According to SPINS, shelf-stable functional beverages is the fastest growing segment of the “Natural Refreshment Beverage” category, growing 77% ($521 million) through February 2019. In contrast, the refrigerated functional beverages category, which includes kombucha, was up just 4%, albeit with significantly larger total sales.

KOE Kombucha is in the midst of discovering the answer for themselves. The Los Angeles-based brand has spent the last several years seeding and testing product in Southern California retailers. According to chief strategy officer Louisa Lawless, the brand received a positive response to the shelf-stable can format, but decided to reformulate to reduce sugar and calories earlier this year. Prior to going wide at retail in 2020, KOE reduced sugar and cut calories across the line. Having started at 80-90 calories per can, depending on the flavor, each 12 oz. can now contains 35 calories and less than 9 grams of sugar, while two new fruit-forward varieties — Lemon Lime and Strawberry Lemonade — have been added to the lineup. For consumers engaging with the category for the first time, Lawless noted, adhering to cold-chain storage and traditional flavors may simply matter less than a good tasting, reduced sugar kombucha.

“Taking sugar down was one component, but really the main focus for us was fruit-forward flavors that were very appealing to the masses,” she said.

That example may be telling; for all the discussion and noise around ideas of authenticity in kombucha by those who make it, the attributes with which consumers connect the strongest — be it convenience, functionality, sugar or something else entirely — will ultimately exert the strongest influence on the category’s future. Those customers will help determine how innovation and identity will co-exist, and, according to Jeff Weaber, it’s up to brands to be ready for the results.

“For me, the whole reason for starting the company was to help replace soda,” he said. “Whatever different formats you can put out there, as long as its accomplishing that mission of giving people a better-for-you beverage, I’m fine with it.”