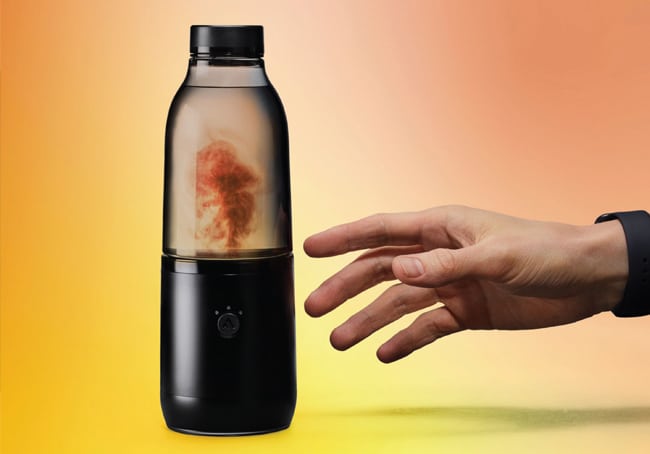 I know there were people out there who lived to regret panning the iPhone. Steve Ballmer, for example, threw some memorable shade its way, calling it the most expensive phone in the world.

Now, I don’t want to be remembered as Steve Ballmer, but he’s not exactly a cautionary tale: the former Microsoft CEO has, if nothing else, really great seats for Clippers games.

Still, history tends to make fun of those who sit on the wrong side of business evolution (note Gerry Khermouch’s column in this issue for warnings about too much adherence to tradition). We can’t stick to the old ways, or we might find ourselves on the sidelines, maybe still cheering for our teams but not in the hot seat anymore.

And yet, I’m willing to risk it when it comes to LifeFuels.

Perhaps you’ve seen the incredible, Instagram-ready snippets of this gadget, which calls itself “The Smart Nutrition Bottle that Adapts to Your Day.” It’s a plastic water bottle that, when you hit a button, shoots flavored nutrient mixes from a base that contains three differently flavored and enhanced “FuelPods.”

According to the company, the brand has a couple of purposes — first, to automatically release nutrients into a bottle and track them throughout the day to understand what you’ve consumed, and second, to eventually eliminate single-use plastic bottles.

For the tracking component, of course, it’s got an app.

On camera, the sight of a red geyser of electrolyte nutrition spewing into clear water is affecting indeed, especially when the scene is set against the mountain that the bearer of the LifeFuel presumably just climbed.

On the desk, it’s a bit less impressive.

I requested one for trial. I got a cheery, handwritten note, welcoming me to the #FuelFam. I also got instructions on how to plug in and charge my bottle and how to insert my FuelPods (a stain waiting to happen) into the base. One confusing instruction tells me to “Set the FuelPod cap aside for later use.” I reach out to relatives in the #FuelFam to learn what that “later use” might be — I am supposed to screw them back onto the empty FuelPods when I send them back? Useful!

I download the app. It confuses me and I move it to the folder where apps that confuse me reside. That folder runs four screens deep.

When loaded and filled, the bottle weighs in the neighborhood of 2 ½ lbs. That’s not light. It takes me a little while to be able to get that weight because I initially forget to put in the gasket that seals the attachment between the water bottle half to the base, so all my added water drains out. Eventually, I get that right, even without the help of the app.

There are issues right off the bat. Will my water bottle shock me if there’s a breach of the gasket? I can’t find an open mini-USB port in my house, so I can’t charge my water bottle. My bottle’s base is hand-wash only. I find this particularly distressing for the company because it is selling to a millennial generation that cannot be bothered to put a cereal bowl into the sink, let alone to hand wash an electric bottle. The unit comes with a special brush, however, and soon, at least, my travel coffee mug is substantially cleaner.

From an experience standpoint, there are flaws. My bottle cannot go into the refrigerator because it will drain the battery. My water, even when it has been mixed with the fruity contents of my FuelPod is, therefore, warm. Due to the size of the base, my water bottle can only hold about 16.9 oz. of water. That’s a two-chug model. A four-chugger would be more thirst-quenching for sure, but the size and weight would be ludicrously inappropriate for my daily mountain hike.

Meanwhile, from a taste perspective, maybe my palate isn’t as refined as the rest of my #FuelFam’s, but I would say that there’s a lot of eau du Propel in there. I know it’s giving me crucial electrolytes. I just wish it wasn’t as part of a room temperature electrolyte soup.

The moguls over at Keurig Dr Pepper are apparently more sanguine on the LifeFuels concept than I am: at the start of the year, they sank untold millions into the company’s Series A round. I’m sure they know gadgets better than me — they knew enough, for example, to avoid the Juicero and keep the Keurig. But still — wouldn’t it have been a surer thing to double down on BodyArmor? Maybe I can bring it up at the next #FuelFam Thanksgiving.

Meanwhile, I guess I’ll see you at the Clippers game.