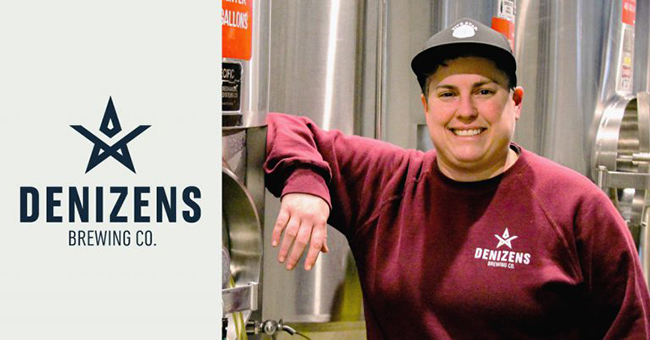 Denizens Co-Founder Julie Verratti Appointed to Serve in US SBA

Verratti has stepped away from her role with the brewery to take on the political appointment.

In her new SBA role, Verratti will oversee the administration’s 68 field offices and 10 regional offices nationwide. The SBA’s office of field operations is responsible for “the direct execution of the Agency’s products and services for America’s small businesses,” according to the release.

Those products and services include the Paycheck Protection Program, through which 81.2% of craft breweries received loans during the COVID-19 pandemic, according to national not-for-profit trade group the Brewers Association (BA).

“I am a passionate and true believer that when government is run well, we can deliver positive impacts for people,” Verratti said. “I can’t wait to hit the ground running to work on behalf of America’s small businesses, so they can do what they do best, which is grow our economy and create jobs.”

Speaking to Brewbound, Verratti said her role at Denizens will be divided between sales manager Ben Hunter and brewery co-founders Emily Bruno and Jeff Ramirez, Verratti’s wife and brother-in-law. Hunter will take on more responsibility of sales in Denizens’ home markets, while Ramirez, who has led production, will take on wholesaler management and Bruno will assume some of the marketing responsibilities and other roles previously held by Verratti.

“I’m optimistic for Denizens’ future. I am optimistic about the future of America, and I am hopeful that I’m going to be able to bring a positive impact to small businesses across the country in this new role,” Verratti said.

Before co-founding Denizens in 2014, Verratti worked at the SBA as a policy advisor and presidential management fellow. Her career also includes a stint as a staff member for the U.S. Senate Committee on Small Business and Entrepreneurship, as well as time on political campaigns and at non-profit organizations.

“My background, both having worked in government before, having done advocacy before, and then also having the lived experience of being a small business owner-operator for the last seven years — and especially during this time of COVID — this is a chance for me to hopefully bring the skills that I have and experience that I have to try to help,” Verratti said. “I just want to be helpful and be of service. When you’re being asked to serve your country, how do you say no to that?” 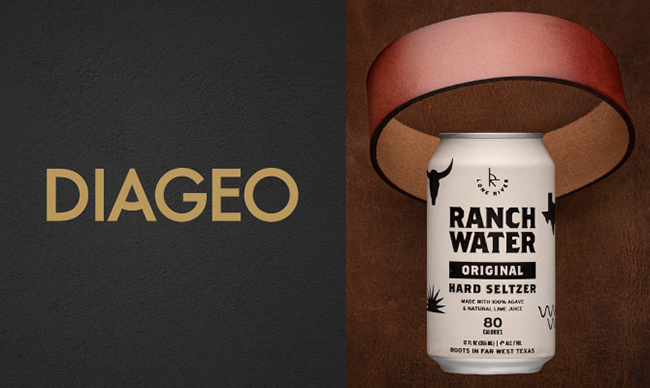 Katie Beal Brown, who founded Far West Spirits in 2019, will retain a minority interest in the company, as well as remain CEO of the brand. She will work with leadership at Diageo North America and Diageo Beer Company.

Lone River will give Diageo another key player in the $4 billion hard seltzer market to pair with Smirnoff Spiked Sparkling Seltzer, which ranked as the fifth best selling hard seltzer in off-premise retailers in 2020.

Portfolio-wide Lone River sales in off-premise retailers year-to-date through February 20 are up 100%, to nearly $1.2 million, according to NielsenIQ AOC plus liquor and convenience data provided by 3 Tier Beverages. The Lone River brand family is also the 14th largest hard seltzer brand family through the first two months of 2021.

In 2020, Lone River posted $4.287 million in off-premise sales, although the company’s products only hit retail shelves on April 17, according to data from NielsenIQ provided by the Bump Williams Consulting Company.

“We obviously had grown so quickly that I just knew there was going to be an extent at how much we could realistically scale the business on our own, just due to our existing infrastructure, our own resources, and, quite frankly, even our kind of experience,” Beal Brown said.

Discussions between Far West Spirits and Diageo started last fall. The timing couldn’t have been better for Far West, as large beer manufacturers such as Anheuser-Busch through its Karbach craft brewery and Heineken USA via its Dos Equis brand are preparing to enter the ranch water hard seltzer sub-segment. Beal Brown knew that competing with those larger companies would require more resources and scale than Far West had on its own.

“So that was definitely a big motivating factor in addition to when you think about Diageo as a whole, I would argue that you’re not going to find a more credentialed company in the tequila space,” she said. “And so the fact that we have been really a first mover in the agave tequila-inspired hard seltzer category, it made a lot of sense in that regard, as well just knowing that their business has been very successful to date.”

The initial focus for Far West under the Diageo banner will be expanding Lone River’s geographic footprint and providing the support to ensure the product is successful in markets outside of its home market of Texas, where the products are distributed by Ben E. Keith statewide.

“I think our ambition is absolutely the same: We think this is a brand that has national potential,” Beal Brown said. “And the way that we get there is still to be announced. But we’re absolutely gunning for that.”

In March, Deschutes Brewery made the first acquisition in the 32-year-old craft brewery’s history striking a deal for another Bend, Oregon-based craft brewery, Boneyard Beer.

Financial terms of the transaction were not disclosed. However, the companies described the tie up as a “joint venture,” with both brands retaining their separate identities.

“This is about a combination of companies, a combination of skill sets and assets and attitudes and all those kinds of things,” Deschutes founder Gary Fish said. “And we think that the sum is going to be greater than the total of the parts.”

Fish summed up what Boneyard brings to Deschutes succinctly: “Attitude.”

“Seriously, the whole Boneyard attitude, not just are they great brewers, but they’ve got a great brand, and it’s a younger, more relevant brand,” he said. “Our brand has aged, and we keep trying to bring the Deschutes brand to the younger consumer, and we’re having some success with that, but Boneyard is deeply rooted in that marketplace, and we’re excited, quite frankly, to learn from them.”

Boneyard co-founder Tony Lawrence will become a shareholder in the surviving entity, as well as return to Deschutes, where he started his career in 1989, as an employee. He will be charged with managing the Boneyard brand moving forward.

Conversations between Fish and Lawrence about linking their businesses have gone on for “years.”

Those conversations sped up last year when the pandemic shuttered on-site service at bars, restaurants and brewery taprooms.

Prior to the pandemic, the decade-old Boneyard was content with producing around 30,000 barrels of draft-only beer annually, while avoiding major capital expenditure projects and infrastructure projects, Lawrence said. However, the pandemic wreaked havoc on that business model, forcing Boneyard to pivot to packaged product at a time when other beverage producers were also making the switch, leading to a multi-year can shortage. Lawrence said conversations with Fish and Deschutes “picked up a lot of speed” and a deal with Deschutes became “a no brainer.”

Deschutes, the 11th largest Brewers Association-defined craft brewery by volume in 2019, will scale up Boneyard’s offerings, starting with RPM IPA, offer sales and marketing support, as well as work through supply chain constraints. 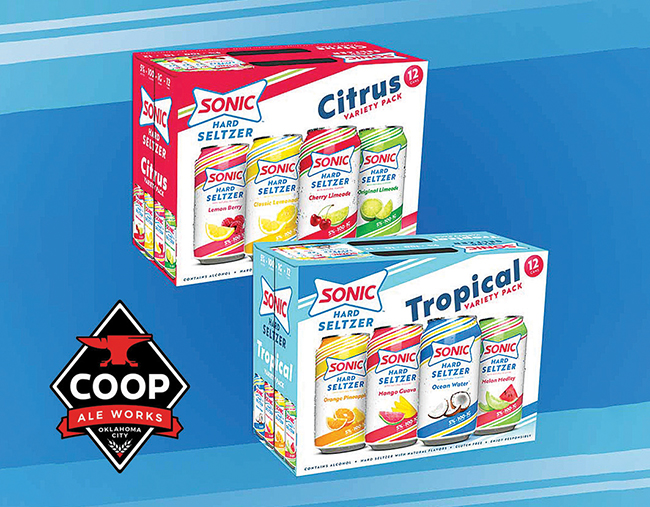 The May 1 launch of a line of hard seltzers branded with fast-food chain Sonic’s name and proprietary beverage flavors has the potential to make Oklahoma City craft brewery COOP Ale Works a player in the $4 billion hard seltzer segment, president Sean Mossman told Brewbound in March.

Becoming a contender at that level would transform COOP Ale Works’ business. In 2020, the company produced 20,000 barrels of product, up 21% compared to 2019.

The journey starts in May with the launch of a pair of variety 12-packs. The “Citrus” pack features Cherry Limeade, Original Limeade, Classic Lemonade and Lemon Berry, while the “Tropical” pack includes Original Pineapple, Mango Guava, Ocean Water and Melon Medley.

In Year One, Sonic Hard Seltzer will be sold in six states — Oklahoma, Kansas, Nebraska, Missouri, Texas and Arkansas. Those six states — which Mossman said account for around 50% of the Sonic locations in the U.S. — will be the only ones to receive the seltzer in 2021. But COOP plans to ramp up the roll out a year from now during the spring resets with the addition of more than 20 states.

Mossman said the idea for a partnership struck him last September while the brew team was developing a hard seltzer for the company’s Will & Wiley line that recreated Ocean Water, Sonic’s proprietary, bright blue, coconut-flavored
soft drink.

After seeing Harpoon Brewery’s partnership with Dunkin’, Mossman decided to contact Sonic to see if they’d sign off on a line of hard seltzers inspired by the drive-in burger chain. However, Sonic execs wanted a bigger partnership and came back with the idea of COOP licensing the brand name for a standalone hard seltzer line. The companies reached an agreement on December 28, and Mossman believes that COOP has since dialed in the liquid with the help of the Sonic team.

“We worked behind the scenes for hours with the culinary team at Sonic on really mimicking Ocean Water flavor and that Ocean Water experience in the seltzer can,” he said. “And that’s been a really fulfilling process for everybody to have the support from to make sure that we were really delivering for the customer what their expectation was from a Sonic branded beverage.”

COOP and Sonic’s partnership will join other hard seltzer marriages between breweries and soft drink producers. Coca-Cola and Molson Coors have teamed up to produce Topo Chico Hard Seltzer, which is rolling out in March. Heineken USA and AriZona Iced Tea partnered on the upcoming Sun Rise Hard Seltzer. And Mass. Bay Brewing, Harpoon’s parent company, has produced its Arctic Chill Hard Seltzer in cooperation with Polar Seltzer since early 2019.

Mossman described a flurry of interest from wholesalers and retailers after 405 Magazine senior writer Greg Horton broke news of the partnership in a Twitter post in late February. Walmart, QuikTrip, OnCue, HEB, Kroger and other retailers have told Mossman their consumer bases overlap with Sonic’s, so they’re confident in the product and will be giving it space within their stores. That’s led Mossman and COOP to believe that their initial forecasts are more conservative than the opportunity in front of them.

“You’re initially planning for a couple 100,000 CEs of growth, and then the conversation is what if it’s a half a million because that’s really a very likely scenario for Year One,”
he said.

For Mossman, he believes the floor for volume growth is 3x over the next two to three years.

“But it can be in the 10-plus range as far as multiples and growth,” he added. “And that’s gonna invite some growing pains along the way. We’re just gonna have to fight through them. It’s gonna be a quantum leap but others have done it before, and we’re taking a lot of cues from businesses that have scaled fast.”