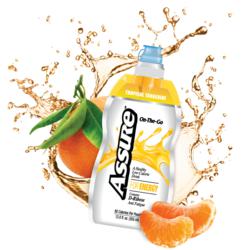 Los Angeles, CA (PRWEB) (July 09, 2011) Shaw’s Markets the largest supermarket chain with stores located entirely in New England markets. Shaw’s remains the only supermarket chain to operate in five of the six states in New England. Shaw’s is also steeped in history in the New England with its first store opening in 1862 by George C. Shaw in Portland, Maine and now 149 years later Shaw’s Markets will be first to market in the New England area with Assure Water and it’s unique pouch packaging and relevant targeted functions and at the same creating a new category in the highly competitive hydration arena.

Chuck Miller, VP Sales & Marketing for Assure Water“stated” “we are very excited about partnering with such an iconic brand such as Shaw’s Market’s with its rich history in New England coupled with their loyal customers we can reach the maximum amount of consumers in one trade area, it positions Assure Water for success in a key market. Boston is a fast pace town with dual income households and living the On-The-Go lifestyle’s and that is who and why Assure Water was created coupled with environmentally friendly packaging, certified quality control with Kosher & Halal certifications all while addressing the Ease of Use of the packaging that can easily be put into backpacks, purses or even your pocket. We have trademarked the packaging and believe we lead in the packaging innovation race that is going on today.”

For years people have enjoyed the convenience of bottled water. But now, thanks to three years of development and research in innovation of Assure Healthy Waters will do more than just hydrate your body but also good for earth.

Heartbeat of consumer buying decisions is innovation when you can provide solutions to today issue and lifestyle and be good for the earth as well. Assure water is first to market with the pouch system with a sports cap. Coupled with cutting edge ingredient’s Omega 3, D-Ribose and Acai as just a few in the line-up along with flavors like Tropical Tangerine, Kiwi Strawberry Melon and Blueberry Pomegranate clearly leads in innovation and exceeding consumer expectations in the hydration category.

In 1862, George C. Shaw opened a small teashop in Portland, Maine. Meanwhile, Maynard A. Davis established a group of small downtown grocery stores in Brockton and New Bedford, Massachusetts, called Brockton Public Market, or BPM. In 1919, Davis purchased the George C. Shaw Company and made it a subsidiary of BPM.

In 2004, J Sainsbury sold Shaw’s to Albertsons for US$2.48 billion. On June 2, 2006, a partnership of SuperValu, CVS Corporation, and several investment firms including Cerberus Capital acquired Albertsons.

Shaw’s’ store footprint currently extends from as far south as the coastal town of Westerly, Rhode Island to as far north as the Canadian border in Derby, Vermont. In terms of store count, Shaw’s strongest presences are in Greater Boston (where its largest competitor is Stop & Shop) and throughout New Hampshire and Vermont (where its largest competitor is Hannaford).

Supervalu has remodeled and updated many Shaw’s stores. In late 2010, Supervalu introduced a newly-redesigned website for Shaw’s; the website is shared with sister stores Cub Foods and Jewel-Osco. Shaw’s has also increased their marketing efforts, partnering with the New England Patriots and the Boston Red Sox Radio Network as their “official supermarket,” airing advertisements frequently on New England radio stations, and maintaining a Facebook page with more than 20,000 fans.

Assure Water will participate in Shaw’s Wild Harvest Green Corner at 103.3 Wods Summer Concert Series. Samples will be given out during the event. Assure will also promote with in store promotion and sampling throughout the year.