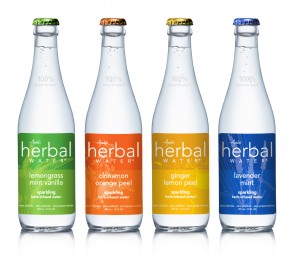 Making its debut at the Fancy Food Show in Washington DC (Booth #2611), July 10th -12th, the new 12oz glass bottles offer both creative flavor infusions enhanced by a delicate sparkle, as well as the convenience of single-serve packaging for immediate grab-and-go consumption. The four Sparkling varieties complement any casual or fine dining experience and provide the ultimate healthy refreshment. Like the original line of 16oz Ayala’s Herbal Water, the new 12oz Sparkling varieties contain no sugar, no artificial sweeteners, no additives and no preservatives, proudly carry the USDA Organic seal, and make a delicious alternative to the calorie-laden beverages and plain water options currently on the market.

“Our fans have been asking for a sparkling beverage since our debut in 2007, and following the stellar success of the Sparkling 750ml glass bottles we introduced last summer for food service, we’ve been inundated by frequent requests from customers for a single-serve sparkling option,” said co-founder and creator Dr. Ayala Laufer-Cahana. “I was delighted to hear from consumers that our sparkling beverage was what finally enabled them to kick the soda habit.”

Ayala’s Herbal Water® has continued to receive rave reviews and awards; most recently, Ayala’s won Self Magazine’s 2011 Healthy Food Award, Natural Health Magazine’s 2011 Good Food Award, and was Good Housekeeping Magazine’s Editor’s Pick for Best Flavored Water in 2010. Year-to-date, Herbal Water saw exponential growth in sales compared to the same period in 2010, and the launch of its sparkling line has opened many new retail opportunities that will further expand the brand’s emergence to a wider audience.

Sparkling Ayala’s Herbal Water is naturally manufactured and bottled in the USA. All Ayala’s Herbal Water® infusions contain the highest quality, organically-grown culinary herbal combinations, which have been crafted for superior taste and refreshment. Expanding their line with the Sparkling 750ml and 12oz glass bottles, Herbal Water proves to be a leader and innovator in the natural beverage revolution.