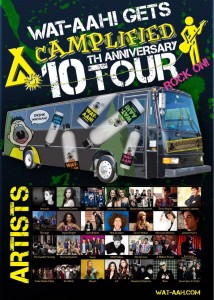 NEW YORK, June 29, 2011 — WAT-AAH!, the first functional water for kids, is proud to be the exclusive beverage for Camplified, the 2011 nationwide touring rock concert celebrating its 10th anniversary. The concert will feature young Radio Disney and emerging musical artists and performers. Camplified’s 10th annual summer tour is organized by Hear Here LLC, a derivative of Primary Wave Music, and kicks off on Saturday, July 2. They will be traveling for 6 weeks to over 60 participating summer camps across the United States, including New York, New Jersey, Connecticut, New England, Carolinas, Florida, California and parts of the Midwest. Approximately 100,000 campers, families, and counselors will experience a “VIP all access pas” to a 90-minute concert and meet and greets, and a daylong interaction with the performing bands and artists. Three million more fans will participate virally with access to interviews and segments of the multiple performances.

“We are very excited to be once again involved with Camplified and to help promote young and talented kids who are persevering and working hard to realize their dreams to become music stars. At the same time, we see this as a fun opportunity to spread our message of healthy hydration,” says Rose Cameron, founder of WAT-AAH!.

Specifically, WAT-AAH! will develop a print and viral campaign to aggressively promote the young artists in Camplified by posting detailed profiles, performances and clips of their work. WAT-AAH! will also be present throughout the tour, providing all participants with products, merchandise and conducting fun contests and giveaways.

The Camplified concert line-ups will feature Radio Disney artists and up-and-coming names such as Jessarae, McKenzie Comer, BRKN RBTZ, Jenny and Ashley, Beyond the Summit, and many more. Other partnering sponsors include Cartoon Network, Scholastic, ReverbNation, YuGiOh, William Rast, Deos, ISafe, and IGA. For more information on the tour, artists, and participating sponsors, visit www.camplified.com.