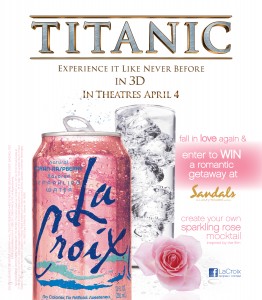 March 20, 2012  — LaCroix Sparkling Water is partnering with Paramount Pictures to celebrate the re-release of one of the most honored films of all time, TITANIC, now newly remastered and in 3D. In conjunction with the film’s upcoming release, LaCroix has developed TITANIC-inspired mocktail recipes and has launched a romance-themed Facebook sweepstakes offering a chance to win a four-day, three-night Luxury Included® Vacation for two at a Sandals Resort.

James Cameron, who also directed the breakthrough 3D epic AVATAR, will bring TITANIC to life as audiences have never seen it before, digitally re-mastered and harnessing the innovative technology of StereoD. Opening in theaters on April 4, 2012, the re-release of TITANIC also coincides with the 100th anniversary of the Titanic setting sail on April 10, 1912.

“We are very excited that Paramount approached LaCroix be a joint promotional partner for this beloved film. One of the most exciting aspects of the promotion was the opportunity for the brand to create the LaCroix Sparkling Rose Mocktail” stated Vanessa Walker, Director of Strategic Brand Management for National Beverage and LaCroix. “This great new recipe joins the growing list of LaCroix mocktails created with calorie, sweetener and sodium free sparkling LaCroix that offer consumers guilt-free refreshments.”

The campaign is also being promoted on the official TITANIC Facebook page, leveraging a 18MM+ fan base, and via targeted publicity events in select cities.

Written, directed and produced by Cameron, and released by Paramount Pictures and Twentieth Century Fox, TITANIC is the second highest grossing movie of all time. It is one of only three films to have received a record 11 Academy Awards® including Best Picture and Best Director; and launched the careers of stars Leonardo DiCaprio and Kate Winslet. Called “A spectacular demonstration of what modern technology can contribute to dramatic storytelling” by Variety upon its release in 1997, the long in the works 3D conversion was overseen by Cameron and his Lightstorm producing partner Jon Landau who produced the hit movie.

LaCroix Sparkling Water serves as a healthy alternative to the many diet sodas and artificially sweetened beverages on the market.  For over 30 years, the #1 ‘flavored and favored’ sparkling water in a can in the U.S., LaCroix Sparkling Water is currently available in eight flavors in 12 oz. cans: Coconut, Pure, Lime, Orange, Lemon, Berry, Cran-Raspberry and Grapefruit.  It is available nationwide at Target stores as well as at many Whole Foods divisions, Publix, Safeway, Kroger, H.E.B, Costco and numerous other retail chains.  New 12 oz. slim cans are available in Coconut, Lime, Pure and Cran-Raspberry.

LaCroix Sparkling Water is a product of the Sundance Beverage Company and is part of the National Beverage family.  National Beverage Corp. (NASDAQ: FIZZ) features refreshment products that are geared toward the lifestyle/health conscious consumer.  Shasta® – Faygo® – Everfresh® – and LaCroix® are aligned with Rip It® energy products to make National Beverage . . . America’s Flavor?Favorite soft-drink company.  www.nationalbeverage.com

What separates LaCroix Water from other seltzers or club sodas?

Sandals Resorts has earned a worldwide reputation for providing two people in love with the most romantic vacation experience in the Caribbean. Currently, there are 14 Luxury Included® Sandals Resorts located in Jamaica, Antigua, Saint Lucia and The Bahamas. Each offers stunning beachfront locations; a choice of à la carte restaurants, from white-glove dining to barefoot elegance; all premium brand wine and spirits, including an exclusive partnership with California’s legendary Beringer Vineyards; luxurious accommodations in a range of categories; unrivaled watersports including the Caribbean’s largest PADI certification program; Butler Service for truly indulgent pampering; Sandals Weddings by Martha Stewart™; and signature Red Lane® Spas, with services and treatments inspired by the region.

Sandals Resorts has set the industry standard for the Luxury Included® vacation and has been voted the Caribbean’s Leading Hotel Brand at the World Travel Awards for 18 years in a row, and World’s Leading All-Inclusive Company for 16 years in a row.  For more information, call your local travel agent or 1-800-Sandals (1-800-726-3257) or visit www.sandals.com.