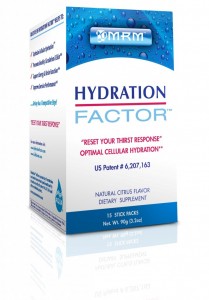 Oceanside, CA (PRWEB) January 12, 2012 – Metabolic Response Modifiers (MRM) announced today the release of Hydration Factor™, a 100% All Natural powdered beverage mix designed to optimize hydration. In collaboration with AquaConneXions®, the Australian developers of the Aqua Hydration Technology™, MRM has developed Hydration Factor™, which has been shown to improve intracellular hydration and regulate thirst, leading to increased consumption of fluid until the optimal hydration set-point has been reached.

Mark Olson, President of MRM states, “Total body hydration is a major factor in overall health and wellness. Hydration Factor™ was developed and scientifically formulated to optimize hydration, which is the single greatest step anyone can take towards improving energy, wellness, and endurance.”

The Hydration Factor™ formulation has been subjected to a trial using males, between 20 and 45 years of age, who were active with normal body mass index. They were provided with either the active formulation or a placebo in a double-blind, crossover design study. Fluid intake and perceived thirst were quantitated by self-reporting and body composition parameters were measured by bio-impedance analysis. Hydration Factor™ elicited a transient increase in thirst and sustained increase in fluid consumption, resulting in a gain of total body hydration due to increased intracellular water, not extracellular water.

Chuck Rudolph MEd, RD adds, “Drinking 8-12 glasses (12 oz. per glass) of water a day is good, but may not ensure proper hydration at the cellular level. Correct hydration is dependent on optimal water uptake of water into the cell, not simply the quantity of water that your drink every day.”

Hydration Factor™ is a revolutionary new product designed to optimize hydration and combat dehydration. Hydration Factor™ will be available nationwide and is the most effective way to ensure the water you drink provides your body with optimal cellular hydration.

About MRM
MRM produces a variety of industry leading supplements in a number of sports nutrition and health supplement categories. MRM’s scientific expertise, superior ingredients, and ability to stay at the forefront of market trends and consumer needs have given it a distinct competitive advantage over other manufacturers. Since its inception in 1996, MRM has placed a priority on formulating superior nutritional products that withstand the critical eye of fellow researchers in nutritional science. MRM’s professional R&D team have authored and collaborated on several university-funded trials, which have been published in international research journals.