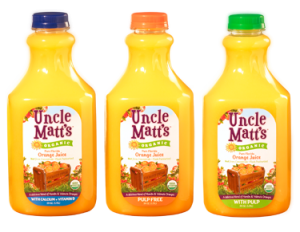 CLERMONT, FL –– January 17, 2012 –– Due to the FDA’s recent concerns over traces of the synthetic fungicide, carbendazim, found in imported Brazilian orange juice sold in the United States, Uncle Matt’s Organic, the nation’s oldest manufacturer of organic orange juice, reassures consumers that all of its juices, including orange and grapefruit, have been grown without the use of synthetic pesticides and fertilizers, which includes synthetic fungicides.

“Because of our compliance with USDA’s National Organic Program (NOP), we do not use any synthetic fungicides in our farm plan for any juice crops ­­–– including the Hamlin and Valencia oranges used in our orange juice,” says Matt McLean, CEO and founder of Uncle Matt’s.  “Our farm plan is free of the fungicide carbendazim, and other banned synthetics as laid out by the NOP.”

“So far the FDA has halted orange juice shipments coming from Brazil,” McLean adds. “This does not affect Uncle Matt’s, because our citrus is only grown in the USA. We proudly support American farmers.”

Uncle Matt’s farm plan goes through rigorous scrutiny from its organic certifier, Quality Certification Services (QCS), for all inputs and farming methods to ensure that crops are in strict adherence to the NOP.