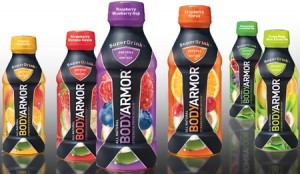 Repole and Collins, close friends and often fierce competitors for 20 years, decided to team up, rather than compete.  Both of their companies were purchased by Coca-Cola in 2007.  “I have known Mike since 1993, and from 2001 until 2007, we were industry rivals, but always remained friends,” said Collins, BODYARMOR® SuperDrink Founder and CEO.  “To have Mike’s brand-building expertise on my side to grow the BODYARMOR® brand is an incredible opportunity,” he continued.

It’s been four years since Repole has been involved in the beverage industry, as he’s been focusing on being chairman and largest individual shareholder of both Pirate’s Booty all-natural snacks, and Energy Kitchen, a healthy fast-food eatery.  Since his acquisitions of both companies in 2008, Pirate’s Booty has grown 300-percent and Energy Kitchen is poised to open 40 new restaurants throughout the US East Coast in the next two years.  “Once every 10 years, a billion dollar beverage brand comes around,” explained Repole.  “In the 70s it was Gatorade, in the 80s it was Snapple, in the 90s it was Red Bull © and in the 2000s it was Vitaminwater.  I’m very confident that over the next decade, BODYARMOR® has the potential to be the next billion dollar brand.”

He continued, “I’ve had over 100 opportunities to get back into the beverage industry and none have intrigued me until Lance introduced me to BODYARMOR®.  Besides my enthusiasm and passion for the brand, I’m also excited about finally being teammates with a great innovator and leader like Lance Collins and the extraordinary field team led by successful industry veteran, John Kenneally, who I’ve also been friends with for over 20 years.  I’m thrilled about the potential for BODYARMOR® with consumers, retailers and distributors, as there has been a huge innovation void in the beverage industry over the last 10 years.”

With his significant investment in BODYARMOR®, Repole will have a seat on the board and the title of “Non-Executive Chairman.”  Though Repole spends most of his time providing counsel to the management teams of Pirate’s Booty and Energy Kitchen, he will be very involved in the consultation and advisement of BODYARMOR®.

Collins adds, “With the addition of Mike to our team, our chances for super success sky rockets.”  Repole was equally optimistic, “Great brand, great team, great timing – I can’t imagine a more exciting way of getting back into the beverage business.”