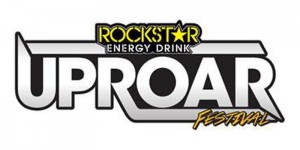 LOS ANGELES, April 16, 2013 /PRNewswire/ — The fourth annualRockstar Energy Drink UPROAR Festival is set for shows acrossNorth America from August 9 through September 15, 2013. The touring rock music and lifestyle festival–which boasted total attendance of nearly 300,000 in 2012–will feature performances from multiplatinum superstars and breaking talent on the Rockstar Energy Drink Main Stage and the Ernie Ball Festival Stage. Look for this year’s bands to be announced on April 22.

Tickets for most shows go on sale Thursday, April 25 at Noon local time and are affordably priced between $10.25 and $89.75(plus fees). Go to www.RockstarUPROAR.com and www.LiveNation.com for full details and to purchase tickets.

The Rockstar Energy Drink UPROAR Festival will entertain fans for a full afternoon and evening, with performances from the hottest rock bands, along with a concourse midway featuring band autograph signings, vendors and other activities. In a live review of the 2012 festival, writer Mary Ouellette of Loudwire.com wrote, “The Rockstar Energy Drink UPROAR Festivalcontinues to be one of the best values for rock fans offering up what feels like a year’s worth of live music in one short day.”

Look for details about the 2013 Ernie Ball Battle Of The Bands to be announced in the coming weeks. As part of the 2012 Battle Of The Bands grand prize package, winners the Chuck Shaffer Picture Show will perform on the Ernie Ball Festival Stage for the entire 2013 UPROAR trek. The band recently recorded an EP with legendary producer Jay Baumgardner at NRG Recording Studios in Hollywood, CA, and won $10,000 worth of music gear and many other prizes as a result of being named the grand prize winner in this annual competition for unsigned bands.


The Rockstar Energy Drink UPROAR Festival is produced by John Reese and John Oakes of Synergy Global Entertainment (SGE), CAA’s Darryl Eaton and Ryan Harlacher and Live Nation’s Perry Lavoisne . Since its inception in 2010, the touring festival’s attendance continues to grow, with nearly 300,000 in attendance for the 30-city 2012 trek. SGE is one of the world’s premier music festival production companies. With hundreds of live events worldwide each year, SGE works with agencies, brands and musical talent to produce or co-produce concerts across various genres and interests.


Rockstar Energy Drink is designed for those who lead active lifestyles – from Athletes to Rockstars. Available in over 20 flavors at convenience and grocery outlets in over 30 countries, Rockstar supports the Rockstar lifestyle across the globe through Action Sports, Motor Sports, and Live Music. New from Rockstar for 2013, Rockstar Energy Water is a non-carbonated and sugar free enhanced water beverage that is now available throughout the U.S. in three refreshing flavors. For more information visit: www.RockstarEnergy.com.
Find us at:  www.Facebook.com/Rockstar  ~  www.Twitter.com/RockstarEnergy  ~  www.Instagram.com/RockstarEnergy  ~  www.YouTube.com/Rockstar