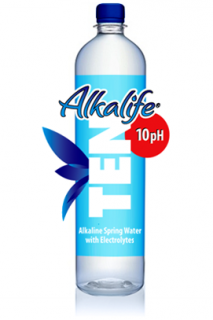 Miami, FL – November 3, 2015 – Alkalife®, the creator and marketer of TEN® Spring Water, announced today a partnership with two professional football players, Colin Jones and Teddy Williams of the Carolina Panthers, to endorse and help promote the benefits of TEN water.

“Alkalife TEN has great taste and ultimate hydration,” said Colin Jones, a defensive back for the Carolina Panthers playing in his 5th season in the NFL. “Whenever I’m training for an upcoming season Alkalife TEN is the only choice I make.” Drafted by the San Francisco 49ers in the sixth round of the 2011 NFL Draft, Colin Jones played college football at TCU.

“Alkalife TEN is the only water I will drink throughout my training and through the season,” said Teddy Williams, a cornerback for the Carolina Panthers now playing in his 5th NFL season. It’s a great hydration tool, great for recovery and helps me get ready to go out and be my best on Sunday.” Known as “Fast” Teddy Williams, in 2009 he recorded a time of 9.90 seconds in the 100 meters that ranked as the fastest time in the world for that year.

“We are thrilled to have these two elite athletes endorsing Alkalife TEN spring water,” said Jose Fernandez, chief executive officer of Alkalife TEN. “Colin and Teddy represent the pinnacle of athletic performance, and both players credit TEN for helping them stay at the top of their game. Many athlete endorsements are just about image, but Colin and Teddy drink TEN exclusively for training and recovery as their hydrating beverage of choice. We are proud they choose TEN.”