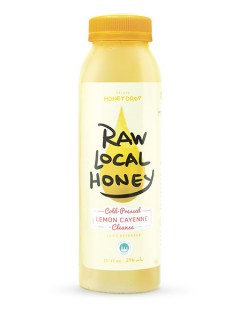 “Our new cold-pressed juices demonstrate the versatile flavor and benefits of raw honey,” says David Luks, founder of Honeydrop Beverages. “By expanding our line, we’re excited for our consumers to try our bold new flavors in a beverage that tastes great, is low in calories and avoids refined sugars, artificial preservatives and artificial sweeteners.”

In addition to its current slate of cold-pressed juices – the Lemon Cayenne Cleanse and Ginger Apple – Honeydrop’s new Matcha Lemon and Kale Cucumber Honeyades are packed with raw Manuka Honey sourced from New Zealand, while the Strawberry Lemon and Turmeric Lemon Honeyades are made with raw honey sourced from local beekeepers throughout regions of the United States, depending on where they are sold.

Beginning in April 2015, Honeydrop Beverages’ new flavors will be available at Whole Foods, Fairway, Fresh Direct and other natural and gourmet stores throughout New York, New Jersey, Connecticut and Massachusetts. Product can also be ordered nationwide at www.honeydrop.com.