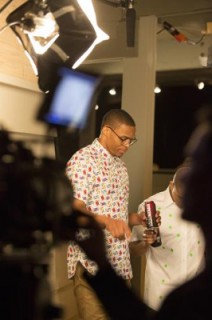 PURCHASE, N.Y., Feb. 11, 2015 /PRNewswire/ — Today, Mountain Dew took a vertical leap and announced a multi-year partnership with basketball all-star and cultural icon, Russell Westbrook.  The partnership with Westbrook, who is known for his creative personality on and off the basketball court, marks the original flavor’s first national partnership with a pro basketball player and will tip off an entirely new extension of the Mtn Dew® Kickstart™ “It All Starts with a Kick” campaign.

As the newest member of DEW Nation, Westbrook will be the face of Mtn Dew Kickstart, including the two new bold flavors – Pineapple Orange Mango and Strawberry Kiwi – that fuse an energizing blast of DEW with real fruit juice, coconut water and just the right amount of kick which hit shelves in January 2015. The partnership officially kicks off in New York City as we lead into the hottest weekend in professional basketball and fans will get a first look on February 14 when a new TV commercial airs, starring Westbrook and his buddies.

“Becoming part of DEW Nation just felt really organic and authentic for me,” said Westbrook. “The brand is an instigator – it’s about creativity and looking at life through your own lens and living it the way you want to live it.  Those are all attributes that are core to who I am.”

“Partnering with an athlete is so much more than just finding an MVP – it’s about identifying someone that truly lives the brand ethos every day,” said Greg Lyons, Vice President of Marketing, Mountain Dew. “Russell is charged with personality and style, and isn’t afraid to push boundaries – making him the ideal partner for Mtn Dew Kickstart and a great addition to DEW’s team of all-star athletes.”

Mtn Dew Kickstart was initially launched two years ago and has been dubbed one of PepsiCo’s most successful beverage product launches in the past 10 years. It grew more than 50 percent in its second year on the market with annual retail sales of nearly $300 million. The two new flavors join previously released Mtn Dew Kickstart Orange Citrus and Mtn Dew Kickstart Fruit Punch, introduced to offer consumers an entirely new alternative to traditional morning beverages, along with Mtn Dew Kickstart Black Cherry and Mtn Dew Kickstart Limeade, geared to get DEW Nation ready for the night.

Visit MountainDew.com/Kickstart or Facebook.com/MountainDew for more information and join the conversation at @mountaindew by using hashtag #Kickstart.

About Russell Westbrook
Russell Westbrook is one of the most celebrated superstars in basketball. An All-Star point guard for the Oklahoma City Thunder, Westbrook has established himself as an electrifying presence in the game, reaching the NBA Finals as well as winning gold medals at the Summer Olympics and the FIBA World Championships. Meanwhile, Westbrook has become a groundbreaker in the world of style and design, where he has built personal relationships with numerous fashion designers and houses, and attended runway shows in the United States and Europe. At 26 years of age, Westbrook has built a reputation as a one-of-a-kind brand in the global markets of style and sports.

About PepsiCo
PepsiCo products are enjoyed by consumers 1 billion times a day in more than 200 countries and territories around the world. PepsiCo generated more than $66 billion in net revenue in 2013, driven by a complementary food and beverage portfolio that includes Frito-Lay, Gatorade, Pepsi-Cola, Quaker and Tropicana. PepsiCo’s product portfolio includes a wide range of enjoyable foods and beverages, including 22 brands that generate more than $1 billion each in estimated annual retail sales.

At the heart of PepsiCo is Performance with Purpose – our goal to deliver top-tier financial performance while creating sustainable growth in shareholder value. In practice, Performance with Purpose means providing a wide range of foods and beverages from treats to healthy eats; finding innovative ways to minimize our impact on the environment and reduce our operating costs; providing a safe and inclusive workplace for our employees globally; and respecting, supporting and investing in the local communities where we operate. For more information, visit www.pepsico.com.