Middlebury, VT (January 19, 2016) – The Vermont Kombucha brewing company Aqua ViTea has expanded its production to Middlebury. Since 2012, the company has based its operations out of an 8,000-square-foot brewing facility located at the Bristol Works complex in Bristol, VT. Consecutive years of increased production and significant growth have escalated the company’s infrastructure needs and necessitated new equipment investments. Middlebury’s burgeoning Exchange Street corridor offered a local solution.

When Aqua ViTea Founder and Owner Jeff Weaber learned that the Middlebury-based Vermont Hard Cider Company (VTHCC) was opening a new cidery, he inquired about the use of their old facility at 153 Pond Lane. On the lookout for local growth potential, Weaber recognized this as an opportunity to keep his company’s business and jobs close to home. Dan Rowell, CEO of VTHCC, worked with Aqua ViTea to craft a win-win transition plan that would keep the Pond Lane facility active and lucrative for both companies and the community. This is not the first time Middlebury’s local economy has benefited from the Vermont Hard Cider Company serving as an incubator for growing local beverage companies.

Aqua ViTea currently leases 20 percent of the 62,000-square-foot Pond Lane facility for administrative operations, brewing, kegging, cold storage, and new equipment. All Kombucha production is expected to transition from Bristol to Middlebury during the first quarter of 2016. 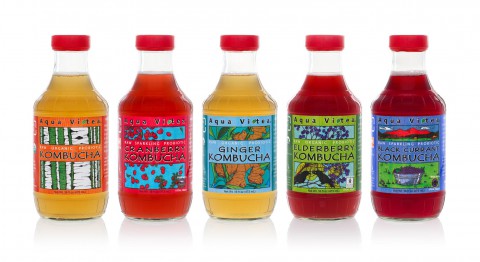 During the company’s tenure in Bristol, Aqua ViTea experienced 75 percent growth annually and transitioned away from self-distribution, allowing for deeper market saturation throughout the Northeast and Mid-Atlantic States.

The partnership with VTHCC drastically increases Aqua ViTea’s production capacity. The facility offers critical water and other infrastructure needs, enhanced production efficiencies, and provides the space for innovative process technology equipment engineered for quality assurance. Looking forward, Aqua ViTea plans to spread and deepen its market reach, while reinforcing its role as a national leader in the authentic Kombucha movement.

Aqua ViTea distinguishes itself from other producers by being the first Kombucha microbrewery in the nation to offer Kombucha on tap from in-store, self-serve fountains. The product is also available in 16 oz. “grab-and-go” bottles. Aqua ViTea Kombucha is currently distributed throughout the Eastern United States.

Kombucha is a sparkling, healthy beverage that aids digestion and boosts the immune system. During fermentation, tea and sugar nutrients convert into vitamins, minerals, live enzymes, organic acids, and beneficial bacteria (probiotics). The drink has been revered for centuries around the world for its life enhancing qualities.

Aqua ViTea’s mission is to cultivate proactive health in people and communities through mindfully made and delightfully funktional products.

Jeff Weaber and Dr. Katina Martin founded Aqua ViTea in 2006. Jeff’s background in beer brewing and fermentation paired with Katina’s training as a Naturopath and Acupuncturist led them to merge their passions to create this beneficial, healthy beverage.