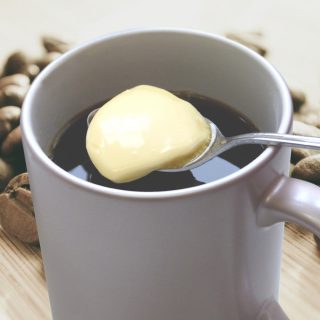 The bulletproof children are coming.

When Silicon Valley entrepreneur and bio-hacker Dave Asprey first posted his recipe for Bulletproof Coffee in 2009, it caught the interest of a few narrow demographics, mainly fitness enthusiasts or fellow tech-industry power players like Asprey.

Seven years later, a new generation of entrepreneurs and brands have begun building the niche product into a legitimate RTD coffee sub-category, each taking different approaches towards tweaking Asprey’s original formula and expanding the drink’s customer base.

In subsequent years the Bulletproof brand has broadened its direct-to consumer offerings to include coffee beans, add-ons like “Brain Octane MCT Oil,” XCT Oil, and other products, as well as a retail coffee shop in Santa Monica. Last year Bulletproof introduced an enhanced water line called FATwater, which combines water with small amounts of XCT Oil.

Thus far, Bulletproof has not produced any RTD coffee offerings, leaving a new wave of brands seeking to fill that space. But before that can occur, coffee producers still need to bridge the gap in consumers’ understanding of the product.

Bulletproof-style coffees were one of the first items added to the menu when Naomi Seifter opened Picnik in Austin, Texas in 2013. She has witnessed first-hand the initially slow process of educating consumers on exactly what the product is and its benefits. It is now the cafe’s bestselling item, and Seifter’s confidence in the category’s potential led to Picnik producing a three-SKU RTD 10 oz. bottled butter coffee that will launch in Whole Foods in spring 2017.

“I was expecting people to ‘get it’ right away, but it was totally the opposite,” said Seifter, who uses Bulletproof brand MCT oil at the cafe. “We had to sit there and convince people why they should try it and what the experience will be like. It took about a year of us doing that every single day with every customer to convince them before they would try.”

Romy Raad and Natalie Neumann, co-founders of Brooklyn-based Metabrew, stumbled on Asprey’s concept while doing research for a thesis paper on how food can enhance performance and productivity. They adopted the complete Bulletproof diet for several months and were impressed with the results. To create their own formula, the pair added organic raw cacao, swapped butter for organic raw cashews, and lowered the caffeine content to make a lighter, easier-to-digest beverage.

“The amount of caffeine in an entire bottle is only 53mg, which is like a cup of tea,” Raad told BevNET. “We added cashews because they make the flavor much nicer. There’s no buttery aftertaste or smell. It also 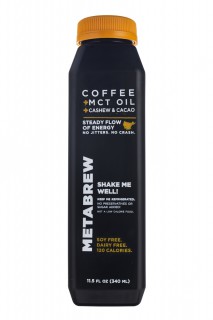 adds creaminess. People are pleasantly surprised that the drink is light.”

Califia Farms recently entered the category with Full Shot, an 10.5 oz. SKU of MCT oil-infused cold brew coffee with almond milk and coconut cream. In an interview with BevNET, Califia founder and CEO Greg Steltenpohl said the company’s interest in Bulletproof-style coffees was sparked after several major national food retailers approached the brand. “[The retailers] wanted to have a trusted brand to address the category,” Steltenpohl said. “There are a lot of new players, and you’re not always sure about the background and level of nutritional integrity [with them].”

“If you are going to have that morning coffee, why not get something amazing in return,” said Leidich. “Why not get all these things? For me, I feel like I’m making this accessible to everyone.”

As consumers continue to learn about butter and MCT oil-infused products, its nutritional benefits will likely be a key point of discussion. The high saturated fat content in such products varies widely — ranging anywhere from 3.5g (16 percent of daily value) to 17g (85 percent DV) — as do calories and caffeine.

Steltenpohl underscored the importance of backing the product with solid science.

“The nutritional benefits have some guard rails around them,” said Steltenpohl. “But the fact that we have a very senior food scientist on board who has a lot of expertise in the area gave us confidence that we could approach it in the most sensible way.” 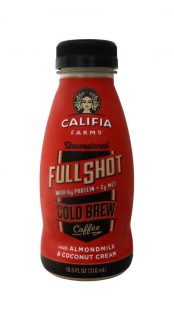 Steltenpohl pointed out that one area of concern was how everyday consumers would respond to a coffee-based ketogenic beverage. One of the goals with Full Shot, he said, was to have a saturated fat content lower than 20 percent of the recommended daily allowance. Full Shot also does not contain butter.

“We certainly could have just added the same amount of pure MCT oil as other people, but we felt the lack of public understanding on the ramifications of large amounts of saturated fat without exercise would not be beneficial to people’s general health,” said Steltenpohl.

There have been more than a few voices raising skepticism over Bulletproof-style coffee’s health benefits. As a meal replacement, for example, Bulletproof-style coffee provides have been cited for containing almost no nutritional value and just one gram of protein. And while nutritionists recognize that a “reasonable” amount of saturated fat is fine, some have recognized that consuming nearly the total recommended daily value in one cup can be harmful in the absence of an overall balanced, nutrient-rich diet and regular exercise.

Asprey himself has also been scrutinized for some of his claims, including the role of mycotoxins, a potentially toxic form of mold that can develop in coffee beans and cause health problems if ingested in large amounts. Asprey has said that that he has developed a proprietary process that dramatically reduces the presence of “inflammation-causing and performance-robbing” mold and bacteria in the Upgraded Coffee sold on his website, yet medical studies suggest that methods already used by coffee producers, such as wet processing, reduces mycotoxins considerably below dangerous levels.

The Bulletproof website contains a disclaimer stating that none of the information on the site has been evaluated by the U.S. Food and Drug Administration (FDA).

Leidich contends that changing attitudes towards saturated fats will ultimately lead a broader audience to butter and MCT oil-infused coffees, and product development continues apace. Each packet of KnowBrainer contains 200 calories and 16g of saturated fat, equivalent to 80 percent of the recommended daily value. The creamer comes in a nine-count caddy for groceries and an 18-count caddy for use at coffee bars.

“Originally we thought every coffee shop would want this, but a lot of shops want to make it themselves” said Leidich. “We are getting lots of orders from coffee shops but also from chains.I think they will look at us to possibly use in their own offerings, rather than doing something on their own.I think the big companies are going after starts ups and they are going to support companies like that.”

Yet to truly scale up, butter and MCT oil-based coffees will have to expand their appeal beyond health conscious and high-productivity audiences.

To accomplish that, brands are focusing on product demos at fitness centers and yoga studios, betting that once consumers try their product, they will be able to feel the difference between it and other coffee and energy drink alternatives. More brands are emerging, and shops and home consumers continue to try out their own variations.

“It’s a niche market, but a very big niche market,” said Raad. “There’s a lot of companies that have healthy functional beverages, and that helps a lot with customer education. The more brands there are the more people are exposed to it.”