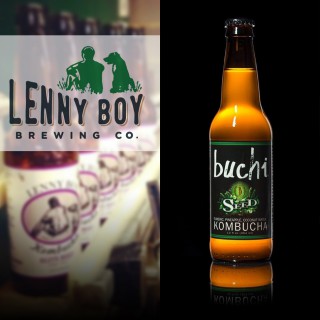 Charlotte-based organic kombucha and beer brewer Lenny Boy moved into a new 29,000 square foot production facility in September, while Buchi is preparing to relocate to a similarly sized space near Asheville by the end of 2016.

The new space addresses Lenny Boy’s issues with having enough inventory on hand to supply both outside distributors and local accounts.

“We would clear out all the flavors before we could restock them,” said Tamara Burke, Operations Manager at Lenny Boy. “We would have a ton of product, and the next day it would be all gone. Now we can make a lot more of our kombucha, but also not lose inventory.”

The facility’s new 2,300 square foot tap room is also a key component in building the brand. Four times as large as in the previous location, the new tap room has 29 taps featuring Lenny Boy’s own kombuchas and beers, plus ciders, wines and cold brew coffees from other local producers.

Burke said the tap room allows for an informal kind of market research, in which the brewery can test out flavors before committing to bottling them. As an example, she cites Wake Up Call, a SKU that includes yerba mate and blueberries.

“That started as a pilot batch in the tap room and people loved it. It’s now our second-biggest seller,” said Burke. “We get to see what people like and what people want to see more of.”

The increased production capacity has also allowed Lenny Boy to begin exploring further distribution options. Burke said the company had just entered into a Charlotte-area distribution partnership with Artisan Beverage Group for its bottled kombucha. The brand’s keg business is limited to a few local accounts. Outside of North Carolina, Lenny Boy kombucha is available at EarthFare stores in the South and Midwest and at Whole Foods in the Southeast, with distribution by DPI and Albert’s Organics.

In the next few months, the company will also implement a twist-off cap for their 12 oz. brown glass bottles.

“It’s difficult to say if the SRP will be affected,” said Burke. “I think in the kombucha market, most people’s SRPs are around the same area. The way the economics work, the bigger we are, the easier it will be to source the ingredients, but it may be a while before we see a change [in SRP].”

About two hours away from Lenny Boy’s headquarters, Buchi is preparing to open a new 30,000 square foot production facility just outside Asheville by the end of this year; that’s over four times the size of its current space. The facility includes 4,000 square feet of office space and a dedicated quality control lab.

“Our goal is to be a strong regional company that goes deep into our local market rather than nationally,” said Jeff Buscher, co-owner. “This is just going to allow us to keep scaling up, where in the past we’ve been hampered by our ability to produce. There’s been more demand than we’ve been able to supply.”

Increasing bottle production, however, is not the company’s priority. Though Buscher said the company will be able to produce 1 million cases per year once all equipment has been upgraded, he said the heavy carbon footprint left behind from shipping heavy bottles across the country runs contrary to the brand’s ethos. Instead, Buscher hopes the new facility will allow Buchi to increase its keg volume output, which already encompasses 25 percent of its business.

“Our emphasis is still going to be in draft,” said Buscher. “We’d rather sell over half of our kombucha in kegs. From what it looks like, it’s probably staying around 25 percent. It’s hard to predict what the market is going to want.”

Buscher said the new facility, built in 1967 as a tomato canning factory, is too rural to support an on-premise tap room, but that the company continues to explore ways to place its kombucha in social settings. In addition to supplying local groceries with in-store taps, the brand has an exclusive “Buchi Bar” serving draft kombucha and kombucha-based cocktails at Asheville cafe Rosetta’s Kitchen.

“We want to get into bars and restaurants all around us rather than say a health food store on the West Coast,” said Buscher. “We want to be where there is more social drinking going on, where more people are hanging out. We are served in a beer bottle, so drinking at a bar kind of makes sense.”

Buchi’s is also targeting further growth in retail outside of its home base. In addition to independent groceries, the brand is currently in all EarthFare stores and South and Mid-Atlantic Whole Foods locations, plus Kroger and Sprouts stores, with distribution through Albert’s Organics for all East Coast retailers. Buscher said the company recently entered the Northeast and is looking next at Chicago and the Midwest. “Right now we are really strong in the Southeast,” he said. “Our goal is to be a strong East Coast company.”

When asked if the new facility would lead to further brand changes such as a new bottle, logo or SKUs, Buscher simply said, “We are working on everything.”

North Carolina has a growing reputation in the artisanal food and beverage scene, fast becoming one of the most active states for craft brewery facility expansions. Both Asheville and the Research Triangle area have burgeoning food scenes; it makes sense that kombucha would follow. Speaking on North Carolina’s status as a hotbed for kombucha breweries on the East Coast, Burke counted having Buchi nearby as an advantage.

“Kombucha on the West coast is a whole different beast,” said Burke. “There are a lot of early adopters out there, so there’s not a big educational piece to it. People in the South are used to drinking sweet tea and having things move at a little bit slower pace. There’s a lot more education we have to do here, but having Buchi here helps educate people on what kombucha is.”

Burke added: “Buchi and Lenny Boy are two completely different flavor profiles. They are different markets as to what people are looking for. It’s no so much direct competition, even though that exists, but there’s a lot of gratitude between the two companies.”