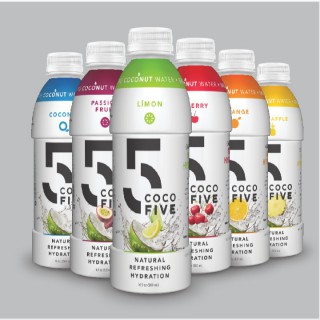 SEPTEMBER 1, 2016 – Chicago, Illinois – COCO5, an all-natural flavored coconut water beverage, releases images of its new bottles and logo this morning. For the past month, COCO5 has been “teasing” its social media followers with glimpses of its new look, and COCO5 followers expressed how excited they are for the change.

COCO5 was originally developed for professional athletes. Soon after its conception, COCO5’s popularity grew rapidly from athletes to consumers. Such growth proved COCO5 is more than a natural hydration beverage alternative – it’s a lifestyle beverage.

What exactly makes COCO5 a “lifestyle” beverage? The healthy, natural, low-calorie, low sugar, coconut water, allows consumers to enjoy coconut water that is delicious, without having to sacrifice taste. COCO5 is the coconut water for people who think they don’t like coconut water.

“We make coconut water taste great, and that’s what make us stand out,” says Scott Sandler, President and CEO of COCO5. ”September is a huge month for us. Not only are we releasing our new bottles, but COCO5 will also be available at two major retailers later this month. We’re excited to give new consumers the opportunity to enjoy a delicious coconut water beverage that is perfect for the whole family.”

The bottles new look is inviting and refreshing, but the delicious flavors inside the new COCO5 bottle are still the same. Keep an eye out for COCO5’s refreshing new look and debut at two major retailers later this month. For more information: follow COCO5 on social media or visit www.coco5.com.