“Chicago Draft Style” is produced by Cool Mountain Beverages and is made only in Chicago by Chicagoans with recipes carefully formulated to best represent the spirit and lifestyle of this great city. Rich in flavor and robust, Chicago draft style began life as a Keg only product, produced for college events, but the demand, for this craft soda became so overwhelming, Cool Mountain decided to put in bottles, expand the brand and make it available to everyone. 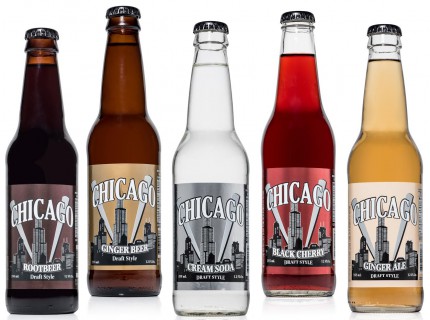 This wasn’t as easy as it sounds, every distributor they contacted in the Chicago area including large, successful, well established operations turned them down. Everybody loved the taste, but couldn’t seem to understand how a great tasting craft soda named “Chicago”, could make a go of it in the city it was specifically designed for and proudly named after.

Bill Daker, president and owner of the brand, decided he would self distribute. (Again, not as easy as it sounds) He put together a small sales force, got a delivery man and he was a distributor. He also employed his own unique marketing strategy, “peppering” specific neighborhoods with the product and targeting particular retailers where he felt Chicago Draft Style would find it’s customer.

That was just five weeks ago and in this short time, Chicago Draft Style is now being sold being sold in retail outlets, restaurants wholesalers and hotels all over the city and it’s suburbs. This is nothing short of phenomenal, a true Chicago success story. And, proof of this craft soda’s great taste and Chicagoans pride in and loyalty to all things Chicago. “In a few short weeks we’ve managed to open a great selection of accounts like the Drake, Potash, 7-11, fresh market and many other Chicagoland institutions. The support we’ve received, from small businesses to Chicago’s top hotels, has gone way beyond our own expectations. And, in addition to It’s great flavor, they all love the idea of Chicago’s very own craft soda company – A craft soda that’s actually bottled in Chicago.

Chicago is a city of great and historical icons, we want to be the next. So the next time you think of Chicago, have a Chicago Draft Style …and enjoy”

For further information, samples, additional photos and to schedule an interview time and date please contact: