OAKLAND, CA (Jan 12, 2016)— A cross between a green smoothie and a cup of coffee, Kuli Kuli’s Moringa Green Energy shots are shaking up a consumer market hungry for easy and tasty ways to get their veggies. The Green Energy shots were created from a unique collaboration between Kuli Kuli, Whole Foods Market, the Clinton Foundation and Haitian nonprofit the Smallholder Farmers Alliance. Kuli Kuli will debut the Moringa Green Energy Shots at the San Francisco Fancy Food Show, Booth #1790.

Over 60% of Americans say that the number one change that they want to make in their diet is to incorporate more vegetables (Hartman Group Report, 2015). Currently only 4% of Americans meet their daily requirement of vegetables (NFVA Report, 2015). But all of that is about to change. With NPR calling 2016 “The Year of Vegetables” and chefs across the country taking up the call to move vegetables into the forefront, vegetable consumption is set to increase. And what better ingredient to lead this trend than moringa, a leafy green superfood widely regarded to be the most nutrient-dense vegetable on the planet. Coupling the desire for veggies are the new US Dietary Guidelines that have included caffeine as part of a normal, healthy diet for the first time. This demand was clear from the over 500 consumers who pre-ordered the Moringa Green Energy Shots through Kuli Kuli’s crowdfunding campaign which raised a total of $100,00. 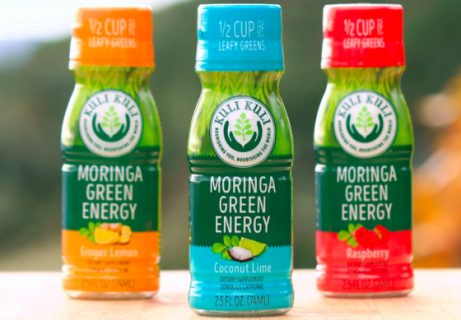 “We approached Whole Foods Market with the idea to create a new moringa product that would help reforest Haiti and support Haitian farmers. They immediately suggested creating a moringa energy shot as there isn’t anything else like it on the market that meet consumers’ desire for both greens and caffeine,” said Kuli Kuli’s Founder & CEO Lisa Curtis.

Whole Foods Market just launched both Kuli Kuli’s Pure Moringa Powder and new Moringa Green Energy shots in all 420 of their stores. Kuli Kuli co-developed the Green Energy shots with Whole Foods, describing them as a cross between a green smoothie and an energy drink, with the health and energizing benefits of both.

The story of Kuli Kuli is one of a grassroots, community-driven initiative that caught the eye of a much broader audience. After experiencing malnutrition as a Peace Corps Volunteer in Niger, Kuli Kuli’s 27-year old Founder Lisa Curtis turned to moringa to regain her strength. This experience inspired Lisa to found Kuli Kuli with a vision to bring moringa to more people who need it by selling moringa products in the US and using the proceeds to support the growth of moringa in the developing world. Launching onto the market in November 2013, Kuli Kuli has quickly grown and now has three different product lines sold in over 800 stores across the US.

Kuli Kuli is the first company to sell moringa food products in the US. The leaves of the Moringa tree are more nutritious than kale and provide a complete protein, similar to quinoa. Over 60% of Americans say that incorporating more vegetables/greens into their diet is their #1 priority, but many find it difficult to get their greens at meals other than dinner. Kuli Kuli’s delicious Moringa Superfood Bars, Pure Moringa Powder and Moringa Green Energy shots make it easy for Americans to get their greens on the go while helping to plant moringa trees and support women farmers in the developing world.

The tiny leaves of the moringa oleifera tree may be the world’s most nutritious green with high levels of protein, calcium, iron, vitamin A and B vitamins. Once eaten by the ancient Romans, Greeks and Egyptians, moringa leaves have been used in traditional medicine passed down for centuries in many cultures. More recently, the modern scientific community has begun to validate many of these claims with over 1500 studies, articles and publications on moringa. Kuli Kuli is the first company to retail ready-to-eat moringa products.

The Smallholder Farmers Alliance (SFA) applies a social enterprise model to help feed and reforest a renewed Haiti by establishing farmer cooperatives, building agricultural export markets, creating rural farm businesses and contributing to community development.  Launched in 2010, SFA is a Haitian non-profit foundation of 3,200 farmer-members who cultivate one million trees on 2,500 hectares of cropland per year. Timberland is the founding corporate sponsor, with additional support coming from the Clinton Foundation.

ABOUT THE CLINTON FOUNDATION

The Clinton Foundation convenes businesses, governments, NGOs, and individuals to improve global health and wellness, increase opportunity for girls and women, reduce childhood obesity, create economic opportunity and growth, and help communities address the effects of climate change. Because of our work, more than 29,000 American schools are providing kids with healthy food choices in an effort to eradicate childhood obesity; more than 85,000 farmers in Malawi, Rwanda, and Tanzania are benefiting from climate-smart agronomic training, higher yields, and increased market access; more than 33,500 tons of greenhouse gas emissions are being reduced annually across the United States; over 350,000 people have been impacted through market opportunities created by social enterprises in Latin America, the Caribbean, and South Asia; through the independent Clinton Health Access Initiative, 9.9 million people in more than 70 countries have access to CHAI-negotiated prices for HIV/AIDS medications; 75 million people are benefiting from disease prevention efforts and investments in the U.S.; and members of the Clinton Global Initiative community have made more than 3,200 Commitments to Action, which have improved the lives of over 430 million people in more than 180 countries. Learn more at www.clintonfoundation.org, on Facebook at Facebook.com/ClintonFoundation and on Twitter @ClintonFdn.

Founded in 1978 in Austin, Texas, Whole Foods Market is the leading natural and organic foods supermarket, the first national “Certified Organic” grocer, and uniquely positioned as America’s Healthiest Grocery Store™. In fiscal year 2015, the Company had sales of approximately $15 billion and currently has 434 stores in the United States, Canada, and the United Kingdom. Whole Foods Market employs approximately 91,000 team members and has been ranked for 18 consecutive years as one of the “100 Best Companies to Work For” in America by Fortune magazine.