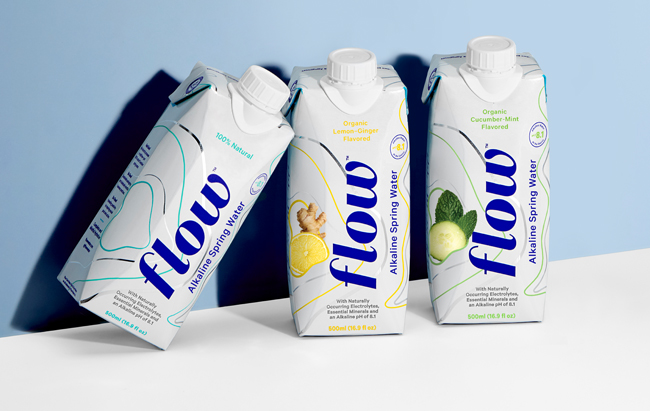 The new SKUs, Lemon-Ginger and Cucumber-Mint, will join the core 8.1 pH alkaline water line in at least 4,000 stores, founder and CEO Nicholas Reichenbach told BevNET. The line, he said, offers consumers a still alternative to the flavored sparkling waters that have grown in popularity in recent years.

“The core of Flow’s consumer base drinks a liter of water a day, on average, and they’re doing it for more healthful benefits,” Reichenbach said. “It’s a part of their daily habit.”

Inspired by consumer research that shows many water drinks soak fruits and vegetables in water to extract flavoring, Flow has developed a proprietary technique to get natural flavors into its alkaline water without affecting the pH balance or mineral content, Reichenbach said. To accompany the launch, Flow will also promote the flavors for different use occasions, with Lemon-Ginger being positioned as an morning pick-me-up beverage while Cucumber-Mint is offered as an afternoon or evening relaxation drink.

“We went into R&D for six months trying to emulate 100 percent naturally infused organic flavor into the water molecule,” Reichenbach said. “We’ve been successful on these first two flavors.”

Reichenbach called Cucumber-Mint a “spa detox flavor tone,” while noting that Lemon-Ginger is aimed at appealing to health and fitness minded consumers who are already familiar with lemons as a natural detoxifying ingredient.

The new flavors arrive following the addition of former Whole Foods category manager Matt Jimenez as a board adviser and head of product development at Flow this summer. Prior to Whole Foods, Jimenez served as national sales manager for companies including Hain Celestial Group and Probar.

“I did constant iteration on product development and working with brand managers and marketing folks, so it’s a hat I’ve always enjoyed wearing,” Jimenez said. “That was the most fun part of my position at Whole Foods, being able to work with all the innovation that brands were bringing in. That’s the part I really liked and now I’ve been able to get away from the corporate structure and back into the creative structure.”

Flow is also prepping for a national summer marketing campaign, which Reichenbach called “very progressive” and will focus on the lifestyle aspects of the brand.

Jimenez added that Flow is currently testing other new products expected to be announced next year.