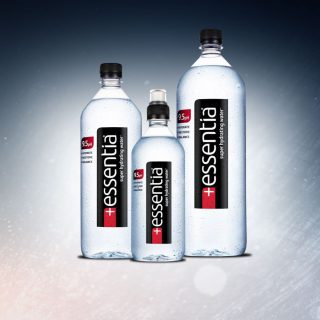 A flood of alkaline waters may have surrounded consumers in recent years, but now one brand is claiming the scientific high ground.

A new study published in the Journal of the International Society of Sports Nutrition showed that Essentia Water, an ionized alkaline water with a pH of 9.5 or higher, was almost twice as effective at rehydrating adults who consumed it after a period of exercise-induced dehydration.

While only representing a small fraction of the total water category, ionized alkaline water brands have enjoyed growth in recent years, in part due to hard-to-prove claims of functional benefits such as improved athletic performance and helping the body fight disease. The new study is particularly notable because it examined the efficacy of Essentia in providing elevated hydration benefits versus neutral pH water and was published in a peer-reviewed scientific journal.

The randomized, double-blind study, which was designed by Dr. Ralph E. Holsworth Jr., a licensed doctor of osteopathic medicine and the director of clinical and scientific research at Essentia, and co-authored by researchers at an independent clinical research organization, used blood viscosity, or thickness, as an indicator of hydration in examining 100 adult volunteers (50 male, 50 female) between 25 and 49 years old.

Participants in the study exercised in a warm environment, including walking on a treadmill and riding a stationary bike, until they had lost two percent of their body weight due to perspiration, which is clinically defined as mild dehydration.

They were then randomized into two groups for a 120-minute period, during which one group received Essentia and the other was given a leading purified bottled water with a neutral pH level. Each individual within both groups was allowed to consume as much water as they felt appropriate to satiate their thirst during that time.

Researchers concluded that the group which consumed Essentia reduced viscosity by an average of 6.3 percent, as compared to 3.36 percent for those who drank the purified water. Other biometric indicators also recorded from participants during the study, such as plasma osmolality, bioimpedance and body mass, revealed no significant difference.

In an interview with BevNET, Neil Kimberley, VP of strategy and brand innovation for Essentia, explained that the study had been in the works for some time, and was motivated in part by a desire to understand why consumers who aren’t deeply versed in the science of hydration have responded so positively to the product.

“Essentia has been around for 18 years and we have 18 years worth of people writing to us and saying ‘I don’t know what it is about Essentia but I just feel better from drinking it,’” he said. “To some degree, our driving desire on this was trying to understand what was actually causing that. We believe that just that sense of hydration that comes from better acuity, from your body performing better, is really what comes from this. It’s just that we had no idea of a way to kind of put ourselves into that and say this is probably the marker that does this.”

Dr. Holsworth noted that there is not an accepted clinical definition, in terms of blood viscosity, for what would be considered normal levels of hydration — but that lower viscosity is indicative of increased hydration.

“It’s very specific to each person,” he said. “Blood viscosity is actually more consistent per person than a lot of other metrics, such as heart rate and blood pressure. But how effectively you are hydrated does reflect very accurately with how thick your blood is.”

Kimberley noted that, while the company considered the scientific results to be important, the results of the study would not have a major impact on the brand’s messaging or marketing.

“Our experience with Essentia is that the more scientific the approach is, the less people really understand about it,” he said. “We really want to have a ‘there there’ for somebody who’s looking for why this is a different product and why I should believe that you are different. We are using this more with public relations and on our website to make that connection.”

Kimberley said that while the brand would continue exploring potential research studies examining Essentia’s health benefits in the future, completing this particular project was most important.

“What we really wanted to do was do this the right way,” he said. “We wanted to make sure whatever our methodology and protocol was really matched up to what we thought our benefit could be and make sure we had the right protocol and the right people in place to analyze it and then the right peers to review it.”