In a move designed to enhance the brand’s ability to sell in conventional grocery stores, drinkable soup brand Tio Gazpacho has replaced its 12 oz. bottle with a new 10 oz. size. It’s one of two key changes for the brand as the year begins, as it has also dropped its USDA certified organic status.

The changes will allow for a price drop for Tio’s products: The 10 oz. bottles will retail for $4.99, approximately $3-4 less than the price of the 12 oz. size. 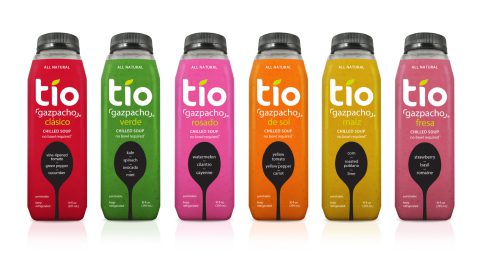 Founder and CEO Austin Allan told BevNET that he’d been working on the 10 oz. line for a year, after it became clear that the $8 price point was too high a barrier for the brand, which had found some purchase in natural and specialty stores, to crack conventional accounts.

Allan expressed some regret in transitioning away from an organic formulation, but called it “the right decision for the brand.” He noted that the use of non-organic ingredients allowed the company to reach a $5 price point for the 10 oz. soups.

“There are some ingredients out there where the difference in price [between organic and conventional] is not significant,” he said. “Unfortunately, our ingredients are not in that set. Things like watermelon and tomatoes and cucumbers, organic versions of those ingredients are much more expensive, in some cases 50 percent more than conventional.”

The introduction of the 10 oz. line is already reaping rewards: the company is set to gain placement at two major conventional retail chains, although Allan declined to name them, citing confidentiality agreements.

Despite strong retailer interest for the new line, merchandising continues to be one of the biggest areas of uncertainty for the brand, which is backed by 301 INC, General Mills’ business development and venturing unit. Allan believes that Tio Gazpacho belongs in a savory set with other soups or snacking items, like salsas, guacamoles and hummus. However, he said that shelf placement varies from store to store and often depends on the personalities of the retail buyers.

“We’re having those conversations on a case-by-case basis and seeing where they lead us with the retailers,” he said. “But so far a lot of the buyers are really receptive to a soup section or a grab-and-go section.”

He added, “We’re still waiting for someone to come into our territory, and as we expand we’re looking to create that soup set with competitors.”

Meanwhile, Tio Gazpacho has launched two new varieties: Maiz, a soup made with corn, roasted poblano, lime and Fresa, a blend of strawberry, basil and romaine. The new products join the brand’s four other varieties: Clásico, De Sol, Verde and Rosado. The launch comes on the heels of the company’s partnership with Michelin-starred chef José Andrés and his company, ThinkFoodGroup.