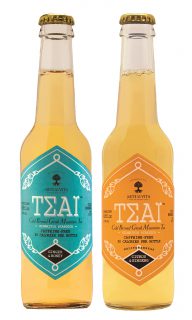 The Greek Mountain Tea (Sidertis-Scardica type) is for those desiring a flavorful and refreshing, yet daily antioxidant and phyto-nutrient boost, but unlike green tea, prefer caffeine-free, made with organic tea herbs and with a low sugar/calorie alternative to most Kombucha drinks, among other tea beverages.

An increasing number of scientific studies confirm that the Greek mountain tea is packed with flavonoids and antioxidants. It has been consumed for centuries for its multitude of benefits that maintain a healthy immune system. It’s also been used as a remedy for colds, aches, and allergies.

Staying true to tradition, the TΣAI mountain tea herbs are organically grown and hand-picked from elevations exceeding 4,000 ft (1219 mt) in the mountains of central Greece under ideal natural conditions. This single varietal, unprocessed super herb produces a distinctly aromatic and refreshingly delicious tisane which is mild and smooth tasting without any bitterness.

“In addition, the TΣAI Greek Mountain Tea beverage is also the first carbonated tea of its kind, as it is cold brewed, naturally caffeine-free, made with natural spring water, and with only 30 calories per 9.3 oz (275 ml) bottle,” said co-founder & president, James Roumeliotis. “This makes it undoubtedly healthier than traditional RTD beverages. It also happens to be made by Greeks who grew-up frequently sipping the hot version of the Greek tea.”

The initial natural flavors are Ginger & Honey and Mediterranean Citrus & Ginseng. Additional flavors will be added in the coming months along with a non-carbonated version.

The TΣAI Greek Mountain Tea is presently preparing for a U.S. import and distribution by early July. Meantime, the principals of the ARTE & VITA brand will be attending and anticipating to make a presentation at the upcoming BevNet Live Summer in New York City.

To learn more, kindly visit the following link. A dedicated site will be going live soon.

ArtiZan Fine Foods, producer of functional beverages and premium health foods, under the ARTE & VITA and TSAI trademarked brands, is headquartered in Montreal, Canada along with a satellite office in Athens, Greece. Its uniqueness is credited for its R&D, clean and plant based ingredients and gluten-free products for a healthy lifestyle. The websites are artizanfinefoods.com and artevita.co.