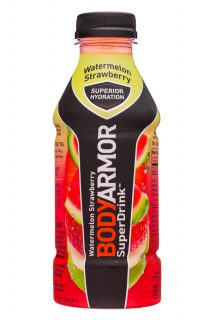 WHITESTONE, N.Y. – BODYARMOR, the fastest-growing sports drink in the category, today announced that the brand will become the Official Sports Drink of NCAA championships, including March Madness, beginning in 2019.

The new partnership will make BODYARMOR the Official Sports Drink of the NCAA. As part of the agreement, BODYARMOR’s logo will be seen on coolers, cups, water bottles and on sidelines and bench areas at NCAA championships, which includes c. In addition, BODYARMOR sports drink will be available in all sideline coolers and in locker rooms.

“The NCAA has 90 exhilarating championships, including March Madness, one of the most exciting events in all of sports, and we are thrilled that BODYARMOR is going to be the hydration brand for teams and student-athletes participating in NCAA championships,” said Mike Repole, founder and chairman, BODYARMOR. “We know that athletes at every level are already choosing BODYARMOR as their sports drink and we are excited for the opportunity to hydrate the country’s best collegiate athletes as they compete at the highest level.”

BODYARMOR is a premium sports drink with potassium-packed electrolytes, vitamins and coconut water and is made with no artificial flavors, sweeteners and no colors from artificial sources. Consumer demand for a better-for-you sports drink has made BODYARMOR the number three sports drink in the U.S. and it has been the hydration option of choice for many professional athletes and millions of high school and college athletes since its launch in 2011.  BODYARMOR is also the official sports drink of UFC and boasts an impressive roster which includes former collegiate athletes and professional athlete partners, all of whom are investors in the brand, including James Harden, Mike Trout, Dustin Johnson, Ryan Blaney, Andrew Luck, Mookie Betts, Anthony Rizzo, Skylar Diggins-Smith, Megan Rapinoe and Diana Taurasi.

“We look forward to working with BODYARMOR in this new partnership and welcome the brand as the Official Sports Drink of NCAA championships, which includes March Madness,” said Dan Gavitt, NCAA senior vice president of basketball. “We thank BODYARMOR for supporting NCAA student-athletes, and we also thank our Corporate Champion Coca-Cola for opening the door to this new relationship. We plan to work very closely with BODYARMOR to make this a successful venture.”

In August, The Coca-Cola Company, an Official Corporate Champion of the NCAA, purchased a minority stake in BODYARMOR, to become the second largest shareholder behind founder and chairman, Mike Repole. BODYARMOR has seen triple digit growth in the sports drink category for five straight years and is on pace to exceed $400 million dollars in retail sales by the end of 2018. In 2013, Kobe Bryant invested in the brand and he is currently one of the top shareholders in the company. Earlier this year, Bryant creative directed BODYARMOR’s largest-ever national advertising campaign.

BODYARMOR is a premium, sports drink that provides superior hydration. It is packed with electrolytes, coconut water and vitamins and is low in sodium and high in potassium. Created in 2011 by Mike Repole and Lance Collins, BODYARMOR contains natural flavors and sweeteners and no colors from artificial sources. In 2013, Kobe Bryant joined the BODYARMOR team as the number three shareholder in the company. In 2017, BODYARMOR launched BODYARMOR LYTE, which has all the same nutrients as BODYARMOR Sports Drink but is naturally sweetened and has only 20 calories per serving; and BODYARMOR SportWater, a premium sport water designed by athletes, for athletes with a performance pH 8+ and electrolytes for sport. In August 2018, The Coca-Cola Company purchased a minority stake in BODYARMOR, making them the second largest shareholder behind Repole.

The NCAA is a diverse association of more than 1,100 member colleges and universities that prioritize academics, well-being and fairness to create greater opportunities for nearly half a million student-athletes each year. The NCAA provides a pathway to higher education and beyond for student-athletes pursuing academic goals and competing in NCAA sports. More than 54,000 student-athletes experience the pinnacle of intercollegiate athletics by competing in NCAA championships each year. Visit ncaa.org and ncaa.com for more details about the Association and the corporate partnerships that support the NCAA and its student-athletes. The NCAA is proud to have AT&T, Capital One and Coca-Cola as official corporate champions and the following elite companies as official corporate partners: Buffalo Wild Wings, Buick, Google Cloud, Indeed, Infiniti, Intel, Lowe’s, Marriott International, Nabisco, Northwestern Mutual, Pizza Hut, Reese’s, Unilever and Wendy’s.