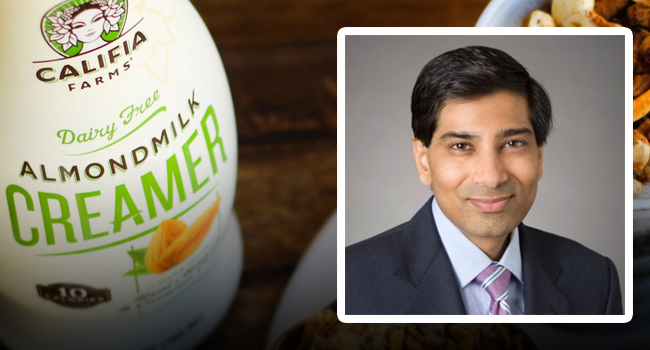 Plant-based beverage brand Califia Farms announced this morning it has closed a $50 million round of financing led by Luxembourg-based investment bank Ambrosia Investments and including a slate of celebrities including Academy Award-winning actors Jared Leto and Leonardo DiCaprio.

The new investment follows a $50 million venture round led by Stripes Group in October 2015 and a $15 million investment by CapX partners last September aimed at expanding bottling and pasteurization capacity at Califia’s Bakersfield, Calif.-based production facility.

Speaking with BevNET during the 2018 Summer Fancy Food Show in New York City this weekend, Califia co-founder and CEO Greg Steltenpohl said the deal will help the company create long-term value and make a deeper commitment to research and development.

“Califia Farms has achieved remarkable growth in its six years of operation through a disruptive suite of plant-based products,” Schoen said in a press release. “We’re excited about our investment in Califia and are committed to the long-term growth of the company as the brand continues to innovate and introduce products that truly live up to their motto of ‘Something Different, Something Better.’”

A spokesperson for Califia confirmed that Schoen would not be joining the company’s board of directors at this time.

The new funding will be directed towards growing Califia’s production facility in Bakersfield, Calif. and optimizing infrastructure to support the brand’s current and potential future product lines.

“It’s going to be needs-focused,” Steltenphol said of how the funds will be used. He cited the brand’s commitment to supporting its recently launched plant-based probiotic drinkable yogurts as an example, noting that bolstering both fermentation equipment and expertise will be an area of interest. The funds will also help develop go-to-market capabilities and allow for upgrades aimed at package flexibility, he said.

Steltenpohl said that ‘Queen Califia’, the mascot from the brand’s logo, would also be integrated more prominently into Califia’s consumer-facing messaging in the near-term. Leto’s band, 30 Seconds to Mars, will feature a 90 second video introducing Queen Califia as “the spirit of California” prior to the start of each show during their Monolith Tour this summer.

Califia also announced the appointment of Sandeep Patel as Chief Financial Officer. Patel, a former managing director at Barclays and Goldman Sachs, will bring experience and versatility to his new role at the company, according to Steltenpohl, noting that the incoming CFO has degrees in biology, economics and law.

Patel told BevNET at the Fancy Food Show that he and Steltenpohl shared a “similar view of looking at the holistic supply chain.” He said that part of his role would be optimizing the pipeline from innovation to commercialization and managing company priorities.

“I’m fascinated by how it all fits together, how decisions upstream affect brand and consumer experience later on,” said Patel. “How do we choose between great ideas? How do [those decisions] benefit the future?”

On a personal level, Steltenpohl said the new funds and the addition of Patel as CFO will allow him to focus on product development and branding.