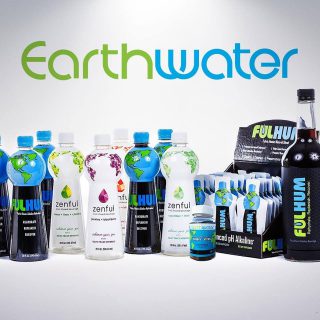 DALLAS — EarthWater Limited, a health and wellness manufacturing company and producer of high-alkaline mineral infused water with a proprietary blend of fulvic and humic complexes essential to optimal health, announced today the addition of Gerry David to its Advisory Board.

Gerry was former CEO of Celsius Holdings Inc. (CELH), a public company. Over the course of David’s tenure as CEO, Celsius made impressive gains in the fitness beverage category, posting record revenues for five consecutive years and a 22-fold increase in its stock price. The company raised $16 million through a group of notable strategic investment partners in April 2015, including serial entrepreneur Russell Simmons and model Kimora Lee Simmons. The brand expanded its distribution footprint under David’s administration. In 2016, the US Army, Air Force, Navy, and Marine Corps signed a partnership to carry Celsius in all bases around the globe, while 7-Eleven and Sunoco agreed to place the product in as many as 8,000 of their total locations.

Celsius also staked out a strong position in Asian markets during David’s administration. Hong Kong business magnate Li Ka-Shing (whose $31.5 billion net worth, according to Forbes, makes him the wealthiest individual in Asia) became a partner through his venture capital firm, Horizon Ventures, during the April 2015 investment round. In March 2017, Celsius closed a second round for $15 million, which was led by Li Ka-Shing’s Horizon Ventures. Celsius is distributed in Hong Kong at A.S. Watson, the world’s largest health and beauty retailer, owned by Li Ka-Shing, with over 12,000 locations and $20 billion in annual revenue.

Gerry is a solutions-focused Senior Executive, Entrepreneur, Consultant, and Board Member with more than 40 years of success across the consumer products, manufacturing, and high-tech industries. Leveraging extensive experience leading five comprehensive turnarounds of both public and private companies with global scopes spanning 72 countries, he is a valuable asset for startup or established companies looking to drive long-term, sustainable growth. His broad areas of expertise include sales and marketing, operations management, financial analysis, capital raising, supply chain management, M&A, regulatory and strategic planning.

Throughout his executive career, Gerry has held leadership positions at organizations including Celsius Holdings, Vitarich Labs, HSN Direct, and his consulting firm Gerry David & Associates LLC, where he currently serves as CEO. He has been responsible for leading the turnaround of a public beverage company on the verge of going out of business, driving 5 consecutive years of record revenue, increasing shareholder value by 22X, establishing a subsidiary in Hong Kong, launching products in Asia, South America, Europe, and the Middle East, and establishing manufacturing in Germany, China, and the US; spearheading the revenue growth of a direct selling company from $2M/month to $4.6M/month in 12 months while developing a new product brand and opening a fulfillment facility in the Bahamas; and facilitating the turnaround of an established direct marketing company, including introducing over 20 new products resulting in a 30% increase in sales, moving the company to a more cost-effective location, and opening up the Israel and European markets. Gerry also lead the turnaround of five companies. Gerry began his career by founding a systems integration company specializing in the hospitality industry, growing the organization to offices in six states prior to its sale to a public entity.

Gerry attended Western Michigan University. He currently sits on the Board of: Physicians Made Beverages, Reedeux Media, Cutting Edge Beverages and Advisor to Rocky Mountain High Brands, Briggs Original and Karuna Beverages. In recognition of his professional achievements, he was one of only 25 Gold Winners in the prestigious 2016 CEO World Awards and was selected as “The Leader” in the CEO of the Year category.

“I am honored to have the opportunity to welcome Gerry to our organization,” said EarthWater Founder/Chairman/CEO, CJ Comu. “He has an impeccable resume and is highly respected in the industry.”

EarthWater Limited is a health and wellness company and manufacturer of Mineral Infused High-Alkaline Beverages. The FulHum and ZenFul brands use a 100% natural, proprietary blend of organic Fulvic and Humic complexes mined from deep within the Earth’s surface. Fulvic and Humic minerals are believed to have properties which combat free radicals, and improve absorption of key nutrients. EarthWater is proud to have at its side a Board of Medical Advisors who utilize its products in their holistic approach to health and who advocate for the benefits of its natural list of ingredients. www.EarthWater.com

To engage with EarthWater online, you are encouraged to “like,” “follow,” and “share” on the brand’s social media pages (@earthwaterhq). EarthWater inquiries can be made via email to info@earthwater.com