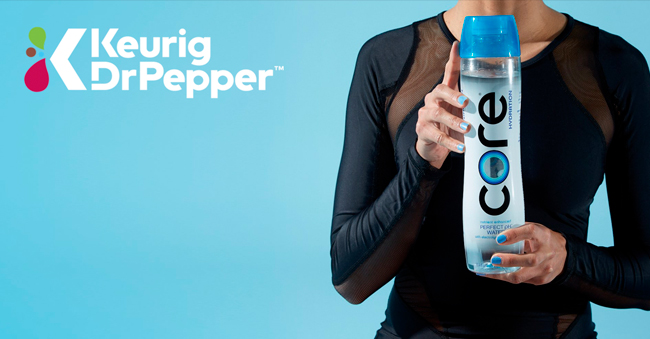 One of a growing set of insurgent premium water brands was taken off the table this morning when Keurig Dr Pepper (KDP) announced that it had agreed to buy CORE Nutrition, the maker of CORE Hydration and CORE Organics, for $525 million.

“KDP has been an outstanding partner for CORE and I am certain that, under its ownership, CORE will continue to see tremendous long-term success,” said founder Lance Collins in a press release. “I am a strong supporter of the KDP strategy and business model and am looking forward to being a shareholder in the company.”

Core was founded in 2015 by Collins, a serial beverage entrepreneur known for starting brands like Fuze and Body Armor, in partnership with music producer Lukasz Gottwald, also known as Dr Luke. Other investors included celebrities like Katy Perry, Juicy J. and Diplo, as well as a variety of Hollywood executives. One company that benefited from the sale, albeit indirectly, was KDP rival Coca-Cola Co., which owned a stake in Core via incubator L.A. Libations. An early investor and distributor of Core, L.A. Libations is partially owned by Coke. Retailer 7-Eleven was also an investor, along with food and beverage entrepreneur Jason Cohen.

The deal comes amid a reshuffling of the allied, independent brands distributed by Dr Pepper Snapple Group, which was taken over by Keurig earlier this year. Pressure increased on KDP to buy Core when Fiji, another premium water company in the allied brand portfolio, cut ties with KDP from a distribution standpoint. Another allied brand, Body Armor, is also leaving the fold, having agreed to a minority investment from the Coca-Cola Co. in August. The company purchased Bai in 2016 and owns a stake in High Brew coffee as well. Vita Coco remains independent but is widely distributed by KDP.

According to the release, Whipstitch Capital served as a financial advisor to CORE, while Evercore Partners worked on the buy side with KDP.

BevNET will bring further comment and analysis of the deal throughout the day. Full press release is below.

The acquisition of CORE® Nutrition will be funded with KDP common stock, net of KDP’s current equity investment and certain other contractual adjustments. The Company expects the transaction to be neutral to KDP’s adjusted diluted earnings per share in 2019 and accretive thereafter.

CORE® has been a KDP allied brand since 2016, with KDP currently managing approximately two-thirds of the brand’s U.S. distribution. Net sales of all CORE® beverages have grown at an average annualized rate of approximately 115% over the past three years, with current retail sales[1] across both measured and unmeasured channels estimated in excess of $200 million in the latest 52 weeks.

Commenting on the announcement, KDP CEO Bob Gamgort stated, “CORE® has been a valued and successful allied brand partner, and we are pleased that this on-trend beverage will become part of our owned KDP family of brands. Our sales and distribution capabilities have helped fuel significant growth for the CORE® portfolio. Through this transaction we intend to realize the full growth potential for the business.”

Lance Collins, founder of CORE® commented, “We created CORE® to meet the increasing desires for innovative, enhanced water offerings with functional benefits for today’s modern consumer. KDP has been an outstanding partner for CORE® and I am certain that, under its ownership, CORE® will continue to see tremendous long-term success. I am a strong supporter of the KDP strategy and business model and am looking forward to being a shareholder in the company.”

Following the closing of the acquisition, both CORE® Hydration and CORE® Organic will continue to be distributed primarily through KDP’s company-owned direct store delivery network and independent distributor network, while certain select existing CORE® Nutrition distribution partners are expected to maintain their channel coverage.