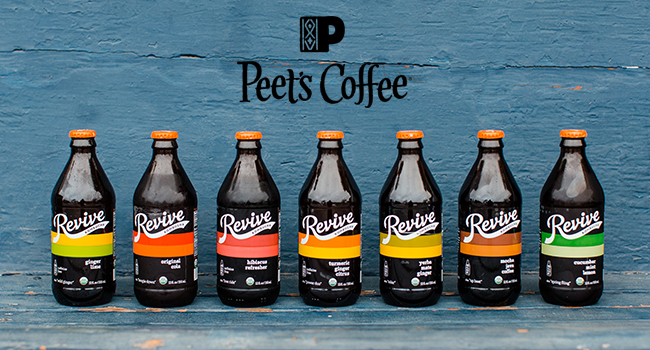 Peet’s Coffee has taken a majority stake in California-based kombucha brand Revive, giving the growing company a single long-term partner with which to build upon its existing growth. Terms of the transaction were not disclosed.

“We are really grateful for the financial partners we’ve had along the way, especially over the last three years,” said Lovett, in a call with BevNET yesterday. “We wouldn’t be here today if it wasn’t for those people who believe in the brand, the taste of the product, and the people within it. Now more than ever, it’s just exciting to be singularly focused with Peet’s on the purpose of Revive and that’s to get this uniquely awesome tasting product to my Midwest brethren, someday.”

As Revive’s new majority stakeholder, Peet’s consumer division president, Eric Lauterbach, said the coffee company will continue to integrate kombucha across all channels, including at its cafes, in store coolers and particularly on draft. He noted that schools and offices where the brand currently sells cold brew coffee on draft have begun to order kombucha as well. The two brands may also be featured alongside each other at certain brand building or tasting events.

“Peet’s and Revive are very synergistic,” Lauterbach said. “Kombucha is a very complementary category to coffee, we share a similar type of consumer. They are going to tap into our system here where it makes sense to help accelerate the profitable growth, and then Sean and the gang are going to do what they do best, which is make an incredible product.”

Building distribution will be a significant focus for Revive, but Lovett underlined an emphasis on securing “good doors and good business” that are sustainable and, most importantly, profitable. The brand is distributed in to over 1,600 food service, grocery and Peet’s cafe locations in California via Peet’s cold-chain DSD network Coldcraft. Revive also uses national wholesalers like KeHE and UNFI to service national grocery accounts like Whole Foods, Trader Joe’s, Fairway, and Wegmans.

“I think we are going to aggressively grow the brand in terms of product, as well as out-of-store awareness and trial and sampling, and then investing back with the big customers who have been supporting Revive,” he said. “As opportunities present themselves to expand with a logical business plan behind it, we are all in. We are not going to do that as others would, just to rev up the sales and hope it gets bought before product stalls out at the shelf.”

The move places Revive firmly under the umbrella of JAB Holdings Inc., which purchased Peet’s for $974 million in 2012. The Luxembourg-based holding company has emerged as one of global coffee’s most important players in recent years, acquiring Intelligentsia Coffee, Panera, Caribou Coffee and Keurig Green Mountain prior to its merger with Dr Pepper Snapple (DPS) last year to become Keurig Dr Pepper (KDP). JAB is the the majority stakeholder in KDP.

Over the past year, the group has looked to unlock both branding and operational synergies across its portfolio. Starting next year, Peet’s shelf-stable iced espresso line, for example, will be distributed through KDP’s nationwide DSD network, while coffee shot brand FORTO, which has received venture investment from JAB and is part of KDP’s allied brand portfolio, recently announced it will be licensing its 2 oz. package for use in similar products marketed by fellow JAB brands such as Krispy Kreme, Donut Shop, Gevalia, and Green Mountain.

Asked about opportunities for Revive to fit in the JAB ecosystem, Lauterbach said, “As I’ve learned with JAB, there’s always opportunities.” He cited the KDP partnership to distribute Peet’s iced espresso as a good example of the two entities “figuring out what we do well and what they do well.” He continued, “As opportunities present themselves down the line, if it’s right business wise and right for both of the brands, then we would explore that.”

Reflecting on an increasingly competitive kombucha category, Lovett said the investment from Peet’s confirms Revive’s commitment to purposefully building a strong brand identity since its founding in 2010.

“We have a really unique position in the category that we’ve taken for almost a decade now in terms of our taste profile and the type of customer we are going after,” he said. “We were potentially a little early in the category to bring that concept to the table, so it’s just been exciting that Peet’s believes in that and sees the vision of where we can take it.”