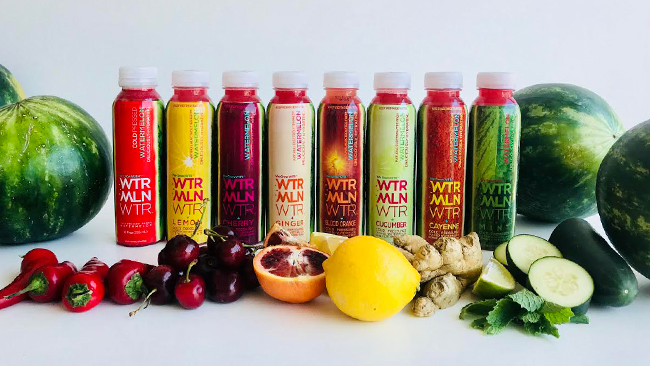 WTRMLN WTR is ringing in the summer with a four-SKU extension of its BLNDS line of functional cold pressed juices.

Similar to the existing Lemon, Ginger and Cherry SKUs, the new BLNDS varieties are a combination of cold-pressed watermelon juice and other flavors, in this case Blood Orange, Cayenne, Cucumber, and Mint. The line will retail for $3.99 per 12 oz. bottle and are now available nationwide, launching today.

Speaking to BevNET this week, WTRMLN WTR co-founder and CEO Jody Levy said the inclusion of Vitamin C, electrolytes, and immunity boosting ingredients brings the new line additional functionality. She added that the line extension was necessary to stay competitive and unique in the quickly evolving hydration, plant-based performance, and enhanced water spaces.

Levy added that WTRMLN WTR’s functionality and cross-category appeal is a boost to the brand in a market where cold-pressed juice is in decline.

“The more we expand out into conventional grocery outlets throughout the United States, and with the juice sector shrinking, because we are extracting water from watermelon we’re finding we still have a lot of space on the shelf because we have less sugar and more function than other brands,” Levy told BevNET.

Levy initially assumed the CEO position as an interim role following the September departure of Christine Perich, who stepped down for health reasons nine months after she was hired. Although she did not intend to stay in the role long-term, Levy said that after taking the reins she felt it was important to stay on as CEO permanently in order to guide WTRMLN WTR’s growth over what she views as a crucial two year period for the company.

“I quickly realized how important the next two years are,” she said. “We have a bunch of innovation we’ve been working on for many years and a lot of things are happening very quickly.”

Because of the required level of strategic and creative detail needed to steer the brand on a day-to-day level, she said, “The senior leadership team and I made the decision together that it would be best for everybody if I stayed in.”

In addition to Levy staying on as CEO, WTRMLN WTR has added a new general manager in Red Bull and Bai veteran Brendan Burns. Burns brings food and beverage experience to the company to supplement Levy’s design background. He will focus on improving synergy between departments in the company and help Levy guide growth.

WTRMLN WTR is currently available in more than 25,000 stores nationwide. According to Levy, Los Angeles, New York, Chicago, and Detroit remain among the top markets for the brand, along with Florida, Texas, and Northern California. The company is currently working to expand deeper into the midwest, targeting consumers who have not yet jumped onto modern health and wellness trends. The push is being accompanied by a clean living education campaign.

As the brand moves forward, Levy confirmed it has also settled a class action lawsuit filed against parent company World Waters, LLC and World Waters Holdings, LLC, in U.S. District Court of Eastern District of New York last July. The case was dismissed in October with prejudice against defendants, according to court documents.